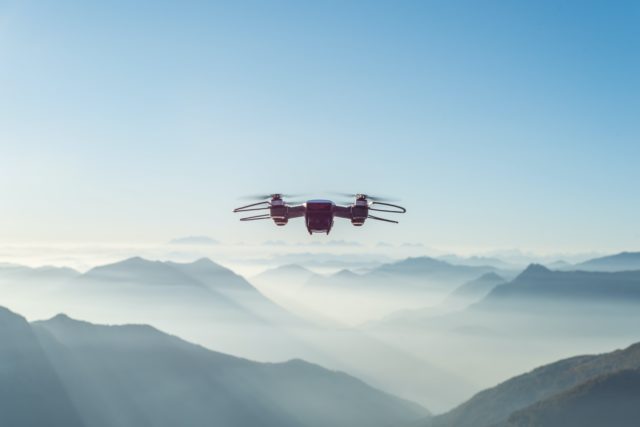 In this article, we will analyze how far can a 2.4 GHz drone go and what are the things that influence its range. With each drone, you will get some description that shows your metrics about its maximum flight speed and flight time. There is a simple formula that can give you a glimpse of how far the drone can fly, and the formula looks something like this: “Distance = Speed x Time”. The speed component in this equation refers to the rated horizontal speed of your drone.  Since some of the drones have multiple speed modes, apply the speed from the normal mode. Some of the most successful drones have their values around 5 to 8 meters per second (like the Yuneec Typhoon). However, some small drones with big motors are able to reach speeds from 15 to 20 m/MPs, like the Spark or the Phantom 4 Pro.

As for the time component here you have to insert the total time of flight possible for your drone. That number is usually influenced by a lot of things but the number shown on the description should be fine. Usually higher quality has a longer flight time, but this also is influenced by a lot of things. However, there are certainly other factors that need to be considered to evaluate the maximum distance that can be covered by drones.

The importance of your controller

The transmitter that comes with consumer drones usually works on 2.4 GHz frequency and has a maximum range of 1.6 km. But the max range can be influenced by factors like obstacles that block the signal, and even noise.

But there is good news as well because there are several things that you can do to increase the range of your controller. For example, lower frequency radio waves travel through objects easily and they tend to extend to a further range even when the signal is weakened.

You can always set your controller to have some more range by replacing the standard 2dB stock antenna to a 4dB antenna that will deliver twice as much power. But doubling the power doesn’t mean you will get double range as well. But with this, you can increase the range by 30 to 50%. And if you want even more you can add a power booster to boost the range.

The orientation of the Controller regarding the quadcopter

You would think that the optimal transmission path between the controller and the quadcopter is in a direct line of sight. But any object that is even partially in the line of sight may weaken the signal. The zone from the transmitter to the receiver forms a shape of an ellipsoid called the ‘Fresnel’ zone. This means that the best communications line between the controller and the drone is the path that is the most ‘obstacle-free’. As obstacles are interfaced with the path the link strength decreases.

The most used frequencies for drone control are 2.4 GHz and 5.8 GHz. The main differences between these two frequencies are the range and the bandwidth they are working on. The 2.4 GHz transmits the commands aka ‘data’ at a slower speed but it transfers them at a longer range. On the other hand, the 5 GHz frequency transmits at a much faster speed but provides less coverage.

The 5.8 GHz frequency has a lower range due to its high frequencies which can’t penetrate solid objects. With the 5.8GHz your connection with the drone is also more stable. Did you know that many household devices like cordless cell phones and garage door openers also use the 2.4 GHz, frequency band?  When the place is overcrowded by multiple devices that use the same radio space the 5 GHz band tends to have a stronger connection because there are fewer devices that use the same frequency band. Also, a 5.8 GHz frequency has 23 channels, while a 2.4 GHz one has only 11 channels. So there are more chances to avoid interference.

If you are only planning to fly a drone in short distances, an omnidirectional setup would be just perfect for you. But if you are flying long distances, then better get a unidirectional antenna.

Increasing the power in the transmitter can also increase the control range of the drone. But it doesn’t work at a proportional rate, so doubling the power won’t double the range too. You’ll need to increase the transmission power by 4 times in order to double the distance range. For example, if you have a 1 Watt transmitter that can reach up to 1 km range, then you would need a 4 Watt transmitter to gain 2km range, and so on. Of course, as you saw power is only one of the many variables that influence how far a drone can fly.

Always be careful, just because you can improve the control range of your drone doesn’t mean that you necessarily should. If you manage to extend your control range past 1.6km (1 mile), your drone will be beyond your line-of-sight. And some of the countries don’t even let you fly further than that distance, so be sure to check the laws in your country before making some major upgrade on your drone. Also, make sure to check which one of the lower frequencies are allowed for public access. Because there are some frequencies that are used for air traffic control, or even by the military and they are prohibited for general usage, and you can get into serious trouble for using them.

So bottom line, always check your local flying rules from legitimate sources and make sure you have all the necessary licenses for flying.

How much weight can a drone carry?