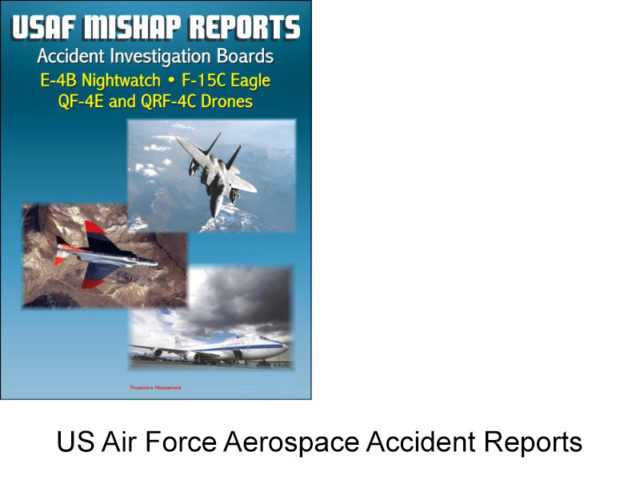 E-4B Nightwatch Advanced Airborne Command Post – on May 12, 2010, at approximately 2310 local time, an E-4B aircraft, tail number (T / N) 73-1676, its tail hit about 1,300 feet beyond the threshold of runway 30 at Offutt Air Force Base (AFB), Nebraska (NE), after completing a National Airborne Operations Center (NAOC) Alert weather avoidance mission. No injuries or lost work incurred by the Mishap Crew (MC). The accident aircraft (MA) is based at Offutt AFB, NE, and assigned to the 1st Airborne Command and Control Squadron of the 55th Operations Group, 55th Wing, provide the President and the Minister of Defence of a survivable command center for lead of the United States forces in all the circumstances of war and peace, and for the support of the federal government during the military, national and natural calamities. The MA was damaged on the underside of the tail section, in a collision, the crash and did not cause any damage to the track. Damage was estimated at 0.1 million

F-15C Eagle Fighter -. On October 24, 2011 at 1602 local time, an F-15C aircraft, tail number (T / N) 80-0041, departed controlled flight in a single-vessel advanced handling (AHC) sortie at the Nevada Test and Training Range (NTTR) . The accident aircraft (MA) started a left turn at 19,000 feet mean sea level (MSL) after the accident pilot (MP) tried a pause in turn followed by a level head reversal. The MP tried to regain control of the MA by following the Spin Recovery display commands. After several revolutions and hundreds of meters of altitude loss characteristics without appreciable rotation, MP lowers the chassis in an attempt MA recovery. When an MP estimated 8 to 9.000 feet MSL (terrain elevation is 4,200 feet), the MA recovered from his spin. The MA regulated in a 50-70 degrees nose low attitude indicative of an attempt to fly to regain airspeed. The MP selected afterburner engines to both an attempt to initiate a dive recovery of low energy of the MA state. As aft control stick was used and the MA approached the horizon, MA nose cut to the left. In this piece, the MP was a controlled situation uncontrolled ejection situation requiring immediate ejection necessary. The MA crashed in an uninhabited area of the NTTR owned by the Bureau of Land Management (BLM). The MP ejected without serious injury, MA was destroyed, and no NTTR or BLM structures were damaged

QF-4E -. On July 6, 2011 at about 1014 local time (L), the Mishap Aircraft (MA), a QF-4E, tail number 68-0371, departed controlled flight during an Opponent Support Training (AST) mission and impact on the ground about 70 mile east of Holloman AFB, New Mexico. The Mishap Pilot (MP) ejected safely and landed about a mile northwest of the MA crash site. The MA and MP were assigned to Detachment 1, 82d Aerial Targets Squadron at Holloman AFB. The MA was completely destroyed in a collision with the loss valued at, 405,543.84. The MP sustained only minor injuries. There was no dam age to personal property