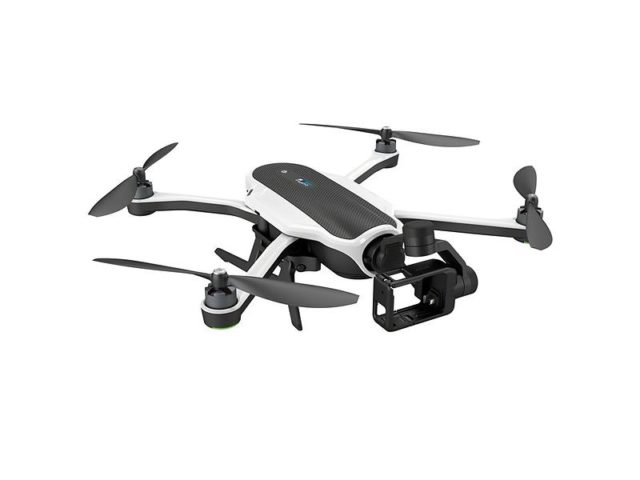 If you want to update the drone you already have at or if you own a GoPro camera but want to do more with it we recommend you to read for GoPro 2018 article. It will help you make an idea of which drone fits your camera best. Additionally, if you are the other way around, where you have the or none of the two, we will also provide you with the latest GoPro Cameras’ announcements to help you start your way.

We must admit that the combination between drones and action cameras is nothing more than amazing. You may think that it is an additional price to purchase them separately and that there are plenty of drones with camera included. From my experience those that come with a camera are usually very low in quality. In conclusion, if you want a high-quality record of your favorite moments you will need to make a small financial tightening, but believe me, it will worth all the pennies.

Without no further addition, let’s see what are the advantages of owning an GoPro Camera and which are the last updates from the brand.

A GoPro Camera is, without doubts, a very versatile device. It has a small size and mostly thanks to this aspect, it can be used in a lot of outdoor activities. It usually comes with a hard PVC case which is meant to water-protect it and the best part about it is the angles that this camera is able to get. It can be attached to any object that can give you a great view, as for example your helmet, bicycle or, if we talk about quadcopters for GoPro, on your drone.

GoPro company became so popular with their great cameras and very good image quality. The GoPro Fusion is the latest and greatest GoPro on the market. They have also released a new member of the HERO family, the HERO6. The Fusion is currently priced at $700, while the HERO6 Black is priced at $500. But they also have more models, which are designed to fit everyone’s budget.

Further, we will introduce you to the five most popular and suitable drones for a GoPro camera. But before that, we want to present you two special entries here. The first one is Tomahawk Drone, the one that we concluded fits best with GoPro cameras, so much that we would call it the GoPro Drone.

The Tomahawk comes with Altair’s C5000 Aerial Sport Camera, which takes aerial photos and videos in 720p high definition (see also). The C5000 isn’t an upgrade from Altair’s previous built-in cameras, but that’s not a bad thing – Altair drones always take good footage and the new quad is no exception.

One nice feature is that the action camera mount that the C5000 hangs from can also be used for the GoPro Hero line or other action cameras of a similar size. So if you’re a serious photographer who’s moved past the 720p default, you can combine the joy of flying the Tomahawk with a superior, more expensive third-party camera.

As stated above, the C5000 camera requires a smartphone and the installation of the Bugs GO app, but no longer requires the purchase of an additional TF flash card.

The next one is another special, which I’m sure everyone, from experienced to first time users, will love it. The cheapest GoPro Drone – the Altair Aerial Blackhawk Drone.

It’s seems that those from Altair Aerial company won’t stop surprising us, and that’s because they are specialised in creating latest techniques drones at an very affordable price. The Blackhawk is a more advanced level quad with 15-17 Minutes of Flight time and 300-500 Meter Range!

The Blackhawk by Altair Aerial costs around $120 and is the best drone with GoPro mount if you want a more budget-friendly, GoPro-compatible drone. It’s a great drone for those at an advanced level of drone flying.

You won’t find a faster drone that’s capable of tricks and flips within this price range. Even though it’s the cheapest drone for GoPro, it feels like a heavy-duty drone that weighs approximately 1.07 pounds.

Because it has brushless motors, which make the drone quieter with stable flights, it’s perfect for a GoPro. It’s compatible with GoPro models HERO3 and HERO4, which are two of the best cameras from the HERO line, overall.

Our next 5 favorites are:

A very popular choice on the market today is the 3DR Solo drone and is considered the best drone of the year so far. It is powered by twin 1 GHz computers and has some really cool functions for shooting aerial videos. Solo is an exciting new drone, and a real challenger to the DJI Phantom 2 and 3. Unlike most of the other drones on this list it is designed totally with GoPro in mind, and you can control the camera with the gimbal (sold separately).

It is compatible with HERO3, 3+ and 4. It also offers streaming in HD via WiFi from your GoPro to iOS/Android devices, so you get FPV, First Person View.

Solo has some really cool functions, such as orbit, where you can lock your camera on an object and get wraparound shots moving in a circular track while keeping the camera locked on the target, and cable cam, where you can lock the drone on a virtual cable leaving you to control the camera. Movie tricks that you usually only see on Hollywood movies, you can now easily do yourself with your drone.

The Solo Gimbal (sold separately) gives you steady and smooth video, and control of your GoPro camera.

The Stratus quadcopter by Ionic is another cheap drone for GoPro camera. For the cost, it offers notably pleasant flying experience.

The Stratus is a drone with most of the extremely sought-after features affordable all-in-one bundle. And it arrives ready with a fixed mount perfect for the GoPro cameras family. It has a one-key return, shock absorbing cradle head, 6-axis gyroscope system, and headless mode.

It can execute 360-degree flips using the press of a control stick. The controller provides three different speeds to choose from to enjoy the flying adventure you wanted.

The mount is rubber, for helping with shock absorption. It does a seriously good job in damping movement and vibrations.

The flight duration is about 10 minutes. Also, there is a battery for sale if you need extended flying time. This drone includes a landing pad to help support its landing. It’s geared up for use plus you do not need to buy spare parts or accessories so as for using it.

DJI Phantom 2 is the popular quad from what is for the most part the world’s most well-known personal drone manufacturer. It is ready to fly, and mount fits perfectly with the GoPro Hero series of cameras.

The flight time is around 28 minutes, and this is the sturdy and steadfast number that was the flagship item for the continuous upgrade up to the Phantom 4.

DJI Phantom 2, with its GoPro capabilities truly became popular for its ease of use, and the gimbal that stabilizes the camera in roll, pitch, and yaw directions, keeping the video looking smooth when sudden or jerky movements occur.

As soon as you learn the ins and outs of piloting this drone, it’s a great option for a quadcopter GoPro in your collection, and is appreciated for its ease of use with the GoPro line.

Traxxas is very well known in the field of RC cars, but newer when it comes to drones. This might be the reason behind the unique look of the Traxxas Aton Drone, with curves that might remind you of a racing car. This drone is very fast as well, with speeds up to 50 mph.

Included in this package there is a 2-axis gimbal that you can use with GoPro. It works with GoPro Hero 3 and 4 but, unfortunately, it does not work with Hero 5. You can get some kind of universal mount that works with Hero 5 as well.

There are different modes you can use when flying the Traxxas, like Sports Mode with speeds up to 50 mph and Film Mode, for shooting videos. Beginners would do best to start in Film Mode.

The Traxxas also has Airbrake, a button you can press if you lose control, and the drone will stop and hover. It can also do flips and rolls.

Another thumb up is the lit up status bar that lets you know when the drone is ready for takeoff. It makes it easier for you to determine what the problem is when things do not work as expected.

We will end this top with a short description of these two, and we hope we helped you make a decision in choosing the drone and the camera that fits best your needs.

With the latest update considering the battery latch, this model is said to ensure around 17-20 minutes of flight. It uses a high-quality propeller, which does not make much noise. It has a smart design that protects the camera well, gives great flight performance and it is easy to carry. It comes with four shooting modes: the orbit-shooting mode, dronie shooting mode, reveal and cable camera mode. And the last great feature is the easy-to-use controller that also has many features.