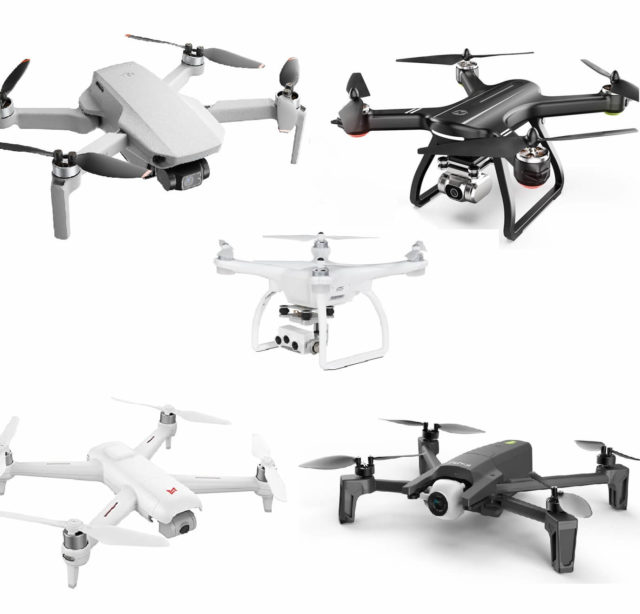 Choosing a drone is never an easy task. You can buy a cheaper drone, with limited abilities, or a more expensive drone with all the newest features a drone can have. But the $500 is somewhere in the middle. You can end up either buying an overpriced or un an underpriced drone. That’s why you need to consider all the possible options. That’s why we have gathered the Best Quadcopters Under 500USD.

The truth is that even when spending $500 dollars on a drone, you could still end up with a poor quality drone, especially if you buy one from a low-quality importer. A drone can be pretty good on paper and still be unpleasant to fly or the features might not work corresponding to your needs. So without further ado, let’s dive into our list of top-performing drones, for under $500.

The DJI Mavic Mini 2 is the first drone we are going to review in the Best Quadcopters Under 500USD article. DJI just launched the upgraded version of one of the biggest gamechanger in the drone industry, the DJI Mavic Mini 2. It’s a foldable drone, just like we’re used to. And it weighs under 250g so it doesn’t require an FAA. Besides this, it has high-quality video resolution and high rate stability.  Also, this drone has the best flight features with 4000 meters of range and a 30 minutes flight time.

The camera is placed on the front of the drone and it has a three-axis motorized gimbal. Inside the camera, there is a fitted 1/2.3-inch sensor. Overall, the camera is able to record video in a 4K HD resolution, with a 30 frame rate. You can downgrade the resolution to 1080p, and in that case, you will able to record at 60FPS. As for the images, it can take photos at 12MP.

Also, the drone is built with excellent features such as: an integrated altitude limit that prevents you from getting carried away, return home function, that kicks in automatically when the battery gets critically low. The drone also has sensors and intelligent flight options so you can create more cinematic videos.

The second drone we are going to review in the Best Quadcopters Under 500USD article is the Holy Stone HS700D. Holy Stone’s HS700D, a.ka. Ophelia is also an update to the original HS700 (that is no longer available on the market on a regular basis). HS is another popular brand that is specialized in mid-range drones. The company’s becoming more and more competitive by implementing the latest features.

The camera features a 110º lens and can record in 2K HD. As with any other drone, this one has FPV support that connects to the drone via a 5G wireless connection. The camera is also mounted on a 1-axis gimbal stabilizer, which reduces the unwanted movement from your footage. As for the flight features the drone has a built-in GPS module. And it can fly as far as 1000meters, (the FPV is only 400m) and the battery lasts for about 22 minutes.

Lastly, it offers additional Intelligent flight features, like Follow Me, Automatic Return Home, Waypoint, and Orbit. The motors on the drone also deliver improved flight time and an increased high speed, of 40 MPH.

UPair’s Two is a quite big drone, that looks very similar to the build of the Phantom series. However, it’s still an entry-level drone that will cost you less than $500. But let’s see what that big build is holding inside.

The camera features a 100º lens, and it’s really special because it’s built 3 cameras. One with a 4K UHD in 30 FPS video/16MP, and the two others with 2K in 60FPS. All of that is supported by a 3-axis gimbal. The drone connects to the phone for FPV in a 5G connectivity. In the package, you get a dedicated controller that can fly for a range of 2000m. The provided batteries are enough for a 24-minute flight. The drone also has a dedicated app, which will let you connect the camera to it, so you may have an FPV feature.

The purpose of these cameras is to make you able to record videos in 3D which is quite unique, even at high-end drones. The motors are strong enough to resist wind. But, unlike rivals, it offers a camera with three separate lenses, called a 3-eye camera. As for the flight features, it can do Optical Flow Positioning just like any other drone, and it has some intelligent flight options as well like the Follow Me, Automatic Return Home, Flight Path, Altitude Hold, and One-key Landing.

Parrot’s Anafi is a lightweight drone that has pretty big potential whitin. First of all, the camera features a 26-78mm zoom lens, with a 3-axis hybrid support system, FPV support. The camera can record in 4K Ultra HD, and 1080p 60 fps video recording. For control, it ships with the Skycontroller for use with Parrots Freeflight 6 app. And Parrot rates the drone for 25 minutes of flight and a maximum range of 4000 m.

Overall, Parrot Anafi is a strong choice for self-portraits and filming. While it has pretty dope features, it’s also very practical because of its foldable build and movable camera.

The FIMI’s A3 is a nice and stylish quadcopter, that is a direct competitor to DJI’s Spark. FIMI is a product of the famous electronics company Xiaomi. The camera itself features an 80º lens, with a 1080p HD video, all that on a 2-axis mechanical stabilization. This will deliver footage that’s almost entirely free of distortion and jello effects. The camera is FPV supported and it has a dual GPS.

It also ships with a dedicated controller that can let you fly as far as 1000 m and a battery that provides you 25 minutes of flight time. Also, FIMI installed a great 4.3″ LCD on the controller, with the embedded flight app. Therefore you don’t need to download a buggy app on your phone. And maybe the best and most unique part is that the drone also features a DIY port, allowing users to add lights, parachutes, fireworks, and other accessories.

But that’s not it, the drone still has something more to offer. Let’s talk about intelligent flight modes. The drone has Automatic Return Home, Orbit, Fixed-Wing, Dronie, and Follow Me. The motors can generate a speed of 40 MPH. Overall, the A3 provides features that are pretty close to the DJI Spark.

In conclusion, we hope that reading the Best Quadcopters Under 500USD article helped you in choosing the right drone for you. All of the drones presented above, have great quality and amazing features. And there is no doubt that they will offer you an amazing flight experience.