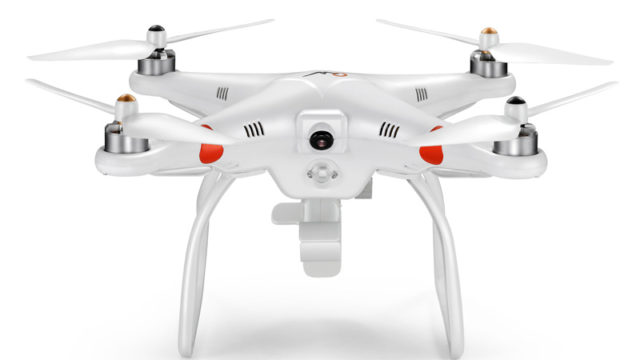 Chitwan QW 350-02 is new quadcopter covered by single white, making it so elegant. The axis with red decoration points out it is the front side of the quadcopter.

Chitwan QW 350­-02 can be considered as a complete aircraft equipment. It comes with camera, GPS, transmitter, display screen and gimbal. It is in size of 290*290*195mm. Powered by 2500MAH 11.1V Li­Po battery, it can fly 15 to 18 minutes. When it comes to speed, this quadcopter reaches 6m/s in upward direction and 2m/s in downward direction. The slower speed in the downward direction is to rule out sudden hit to the ground, which would damage the structure of the copter. While the maximum flight speed is up to 10m/s, that is 36 km/h.

Chitwan QW 350­-02 has a built­in camera with resolution of 720P, which is enough to make clear image for you but you are allowed to mount other cameras you like on the bottom to shoot for you. The 3­axis gyro is steady without shaking during flight, which provides the images quality of aerial photography.Additionally, with the integrated GPS auto­pilot system which offers altitude lock and stable hovering, we can own a perfect shooting effect.

● 800m flying distance, according to the RC signal, Chitwan QW 350-02 can fly further.
● Chitwan QW 350-02 can automatically hover in the sky as long as you have no operations with the transmitter.
● 3­axis gyro gimbal can promise the images quality, steady without shaking.
● With low voltage protection alarm and auto­return­home .
● Function:Set high, hover, a key back, out of control protection, automatic landing, low voltage protection.