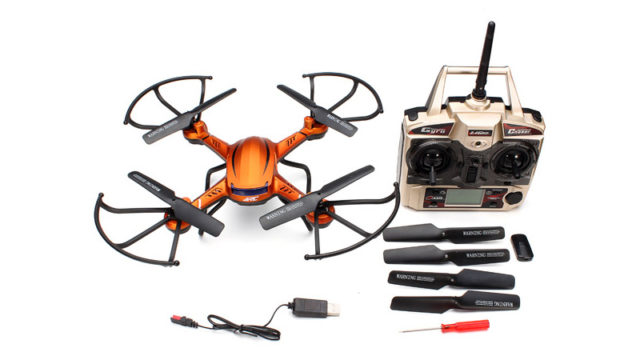 The design of the H12C is very attractive and is available 3 different colors: black, orange and white.

As it comes to the size, it is smaller than my JJRC H8C, somewhere between the mini and mid sized .quadcopters The motor to opposite motor distance is near 21cm (8.2′′).

JJRC H12C is a ready to fly (RTF) quadcopter, only the landing skids and propeller guards have to be assembled and secured with screws to the body of the aircraft.

For night flights and better orientation, the quadcopter has 6 LED lights, two blue LED on the front, one blue LEDs under each front arm and one red LEDs under each back arm. The LED light can be switched ON/OFF from the remote controller, but in case of low battery voltage alarm they will start flashing.

H12C can be easily used for indoor flights, it is very stable and it can hover almost hands­free. Setting the speed to 20% will be very hard to hit something accidentally, that’s why it can be a very good practicing quadcopter.

It also has a very good build quality compared to other JJRC quadcopters, has also different LED colors for front and back. Additional LED light in the front of the aircraft. To be mentioned is that is has headless flying mode and gradual adjustable flight speed.

Another awesome thing is that the battery can be also charged without removing it from the quadcopter and it also has the 5MP pixel full HD 1080p camera.