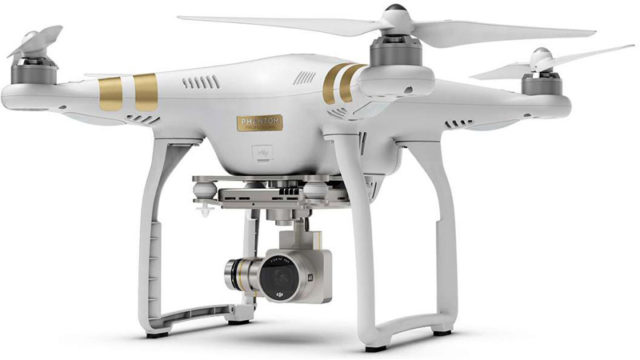 No wonder why they are so popular. DJI Phantom 3  models are relatively cheap, they’re simple to operate, and the cameras that come attached to their bellies produce quality images and videos.

The recently launched Phantom 3 Professional Quadcopter, the latest model, extends all of the strengths that previously belonged to Phantom 2. The Phantom 3 doesn’t look much different than its predecessor, the Phantom 2. But while outward appearances may be the same, and the specs bump on paper doesn’t look huge, make no mistake, this is not a minor update. It’s evidence that the flying drone is truly ready for the mainstream.

As a matter of fact Phantom will come in two different flavors: an Advanced edition and a Professional version. The difference between the two is the camera; the Phantom 3 Professional will feature a 4K video camera while the Advanced will shoot at 1080p.
The Phantom 3 Professional captures 4K video at either 23, 24 or 30 frames per second, which eliminates the advantage of using a GoPro in most cases. There are also a few new tricks in the camera, like streaming 720p video direct to YouTube, which could have a huge impact on how journalists cover events and breaking news. The camera also no longer uses a fisheye lens, which means that live streaming video will actually require less editing. Did I mention the range has been improved? Those journalists (or rescue workers) can now be over a mile from the scene and still flying comfortably.

In the box: DJI Phantom 3 Professional Quadcopter with 4K Camera and 3-Axis Gimbal

If you are interested in more information about the Phantom 3, read our review about it.