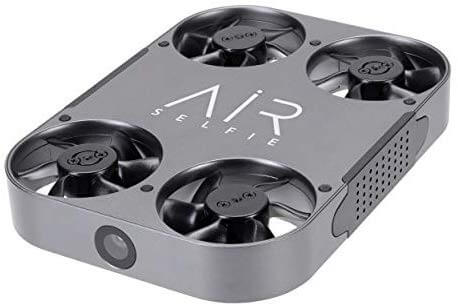 Nowadays probably you’ve seen a great variety of design in quadcopters. From small to big, from great features to only basic ones, drones for fun and great professional camera drones, the diversity is endless. AirSelfie 2 Quadcopter is the second generation of the AirSelfie. Initially, it came to life as a Kickstarter campaign about a year ago. The first generation of the AirSelfie just was not mature enough. The second generation of AirSelfie is a major upgrade from the previous one. It has literally better specifications than the previous model, at a lower price, and also great improvements in battery life and other characteristics.

Who is the target customer for the new AirSelfie 2 and what this tiny flying machine does? Probably form the name you already figured out that the new AirSelfie 2 does selfies. It is a selfie drone, a really small one. It does what it’s meant to do. Let’s see the features more exactly in detail to have a greater perspective what the AirSelfie 2 is up to.

AirSelfie 2 as you probably figured out is a pocket-sized flying camera. At first glance, it reminds me of a four-propeller computer cooler. The body of the AirSelfie 2 is encased in an anodized aluminum body. It is really lightweight. It only weighs 80 grams. The small dimensions of the AirSelfie 2 are really handy. It easily fits in any kind of pocket. The ultra-portable nature of the AirSelfie2 opens new perspectives.

AirSelfie2 is smaller than a smartphone. It has four propellers that are powered with brushless motors. The 6 blade propeller design could have been replaced with only 2 blades for more power efficiency, but probably the stability would have been less. The metal-colored aluminum housing has rounded edges, it looks like a smartphone body. On the front, you see the 12 MP camera and on the back, you will discover a USB C type charging port. On the bottom of the AirSelfie2, you will discover two sensors along with the power switch. The stability camera is one of the sensors that help uphold firmly in hovering the AirSelfie2. The altitude sonar also helps in this fine-tuning. All these in-flight stability systems help in taking clear selfies, or video footages. The power button is tricky, you have to hold for a few seconds before the AirSelfie2 is powered on.

Although its small size AirSelfie2 is well made, robust little gadget. You won’t feel it like a cheap plasticky toy. AirSelfie2 is like a tiny spy device, that can document anything from the air.

In order to fly the AirSelfie2, you have to plug in to charge up the battery. A full charge up takes about an hour, which provides a 5 minutes flight time. The built-in 400mAh 7.4 LiPo battery can be charged up also with the Power Bank if you purchase the model that includes it in the box. A full charge is indicated with a small red LED on the drone.

The control of the AirSelfie2 is made with the dedicated app that you have to install on your smartphone. The AirSelfie2 generates a 2.4 GHz wifi network in order to have a stable connection with the application.

The application is a quite basic, you have 3 flight modes in order to control the AirSelfie2. You can choose between them for a proper flight experience. in the app, you also find some customizable setting and also a calibration option. The first flight mode you can choose from is a one-handed and easy to control. The second one is slightly different, with the tilting of your smartphone you control the AirSelfie2’s movements. The third two modes are using virtual joysticks. It is a familiar and a bit advanced mode to control this little machine.

To launch the drone into the air is a bit tricky too. You have to use hand gestures to fly off the drone. From the palm of the hand with the camera facing towards the pilot, a simple nudge up in the air, and the AirSelfie2 is up to take some selfies. Landing is somewhat similar. Simply grab the drone in the air and raise that hand. The drone will detect that it must be turned off. The control range of the AirSelfie2 is about 20 meters in distance.

AirSelfie2 as previously mentioned has a 12 MP camera that is able to shot HD photos and videos. With the 81° wide angle camera you can capture more detailed perspectives. Along with the application you have a timer on taking photos, you can take multiple photo shots, that you can instantly share on all popular social media platforms.

The basic advantage of this selfie drone is that you can use as a selfie stick from a greater distance, than any other stick you find. The captured video footage has no sound, the propeller blades generate too much noise.

AirSelfie2 is a great compact selfie drone. The main benefit of this drone is that is extra small, you can carry on wherever you want, and it fits in any kind of pocket. AirSelfie2 is an upgrade against the first generation of AirSelfie. The flight time is doubled, it can fly up to 5 minutes. The camera is much better than the previous version, that had only 5 MP. And the price of the AirSelfie2 is lower than the original AirSelfie. You can purchase if you are interested in two versions and four different colors: silver, black, gold and rose gold. The two version differentiate among themselves that the one has a leader bag included in the box, the other version has a Power Bank included. And also these two versions differ in price too. If you are captured by the selfie drones, take a look at this article to have a wider perspective about this category in general.

© Copyright Best Quadcopter
We use cookies to ensure that we give you the best experience on our website. If you continue to use this site we will assume that you are happy with it. Read moreOk