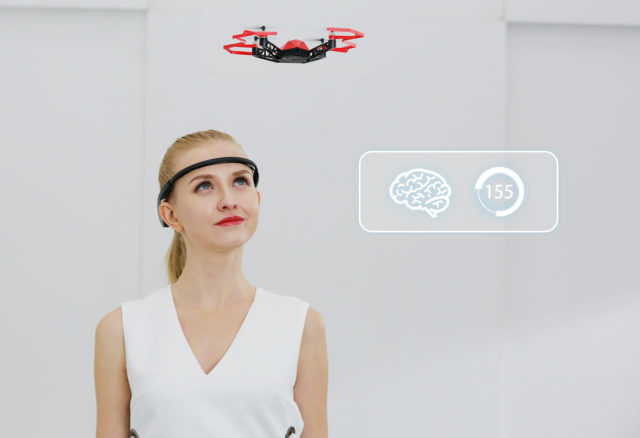 The drone can be described with only one sentence: “The future is here”. The new EEGSmart UDrone Mind-Controlled Drone can now be controlled with just your mind and you don’t to implant any chip or anything in your head. You can simply control it with your brainwaves and head movements. Previously other manufacturers invented drones  like the KF607  that can be controlled partially with hand gestures. But this is on a completely new level. Well, it’s not perfect by far, but is it definitely a promising start. Stick with us for further information.

The drone itself is really unremarkable, it’s a lightweight mini-quadcopter with 2-inch props. Covered with plastic bumpers to save it from damage when it bumps into a wall, and an 8-megapixel, 1080p-capable camera. If you ever think that your brain needs a break you can fly it easily using your mobile phone as well. In that case, it works like most similar small quads, but also has some smarts under its belt with face tracking, subject tracking, and gesture recognition.

The drone has the size of your palm, and it weights only 85g. The UDrone is extremely compact, light, and easily portable. Its portability and convenience of use make it an excellent choice for any outdoor activity.

Compared with other bigger and heavier drones in the market, the UDrone generates less momentum during crashes, thanks to its crafted lightweight design and the protective bumpers, effectively preventing the drone from destruction in case of crashes.

If you wait to find an ordinary remote control in the box we will have to disappoint you. The Drone doesn’t come with a regular remote control. Instead, you will find the EEGSmart’s UMind Lite headset, and here’s where things get interesting. You have to place it over the ears across your forehead, just above your eyebrows. Then you pair it to your phone through the UDrone app, and then set the drone into “mind control mode” to activate it. But how’s that working you might ask. Well with a lot of high tech sensors:

Flying it with your mobile device as the remote controller is an alternative and maybe an easier option. The UDrone mobile APP allows you to command the drone smoothly and effortlessly. Due to its intuitive design and build it only takes you a few minutes to learn the tricks of flying.

The camera is sensitive to light and colors, the HD camera of the UDrone captures stunning aerial images and videos. All images taken with the UDrone are consistently sharp and vivid with very little color aberration and distortion. The camera features an f/2.8 wide-angle lens and a 1/3.2 inch Sony CMOS sensor, allowing you to shoot stabilized video at 1080P and stills at 8 MP.

You can also take a photo with the drone without using any remote of course which is not a new thing. There is two option for that. Or you blink twice and the timer is starting or you show a “V” (a peace sign) with your hand.

The Optical Flow technology is the distribution of apparent velocities move of brightness pattern in an image or the pattern of apparent motion of target with the relative motion between an observer and a scene. Putting it in a simple way to understand the concept is the drone can detect the motion of movement to locate the subject and move more stabilized.  It is a feature that works by having a downward-facing camera “view” the ground surface while sending a continuous flow of optical response to the flight controller that then makes flight adjustments to keep the drone in its spot.  As a result, the drone will take clear and beautiful photos

To launch the EEGSmart, you take on the headset, put into mind-controlled mode, then focus your way to 150 or more, and the drone lifts off to a chest-high hover. Focusing hard on the drone can make it take off, letting your mind wander makes it fall, in little stepped levels. To move it left or right, you tilt your head in that direction. This feels extremely intuitive for and works really well then the drone tilts whichever way you tilt your head.

To move it in front or back you have to do the opposite with your head.  The landing is another interesting thing, to land the drone you have to bite your teeth, yup that’s all.  Once the drone is lifted, you can view the real-time camera feed via UDrone app and sync footages shot onto your phone instantly. You can initiate a focus on a subject, and the camera will do the rest. The Subject Tracking Camera can even identify a certain person and record continuously with Auto-follow as the person moves even in a crowd.

The Auto-Flight control system of the EEGSmart mind-controlled drone helps it find the perfect balance in the air. Which means that the drone can precisely fly in the midair to get that perfect shot video or selfie every time. And even with its compact size, the acceleration sensor with the three rotors enabled the drone can maintain stability in flight. The drone comes in three adjustable speed settings including indoor, outdoor, and open ground to find the optimal flying option. Whether you are indoor or outdoor, on the road or at home, U-Drone can give you a great experience.

Here are a few ideas on how you can use it: attending concerts, home gatherings, and house parties, hiking, bicycling, or any other outdoor activities.

Due to its small battery size, it can fly for six or seven minutes on a battery, which is about right for this size of the thing. The camera streams video back to your phone in real time as long as you’re connected on your phone and you’re within Wi-Fi range.

You can also take a photo with the drone without using any remote of course which is not a new thing. There is two option for that. Or you blink twice and the timer is starting or you show a “V” (a peace sign) with your hand.

The EEGSmart mind-controlled drone it’s a great, innovative and unique thing. It has a good camera but it’s not the greatest and drones are used usually to take good pictures from above. There are so many more useful drones out there which are also giving you a great flying experience. So my advice is that until you don’t swim in a money pool don’t buy it. It may be fun and can show off with that but after a few days, it will be boring. If you want to buy a drone you better buy a classic drone with more feature and learn to control it. But the choice is yours.