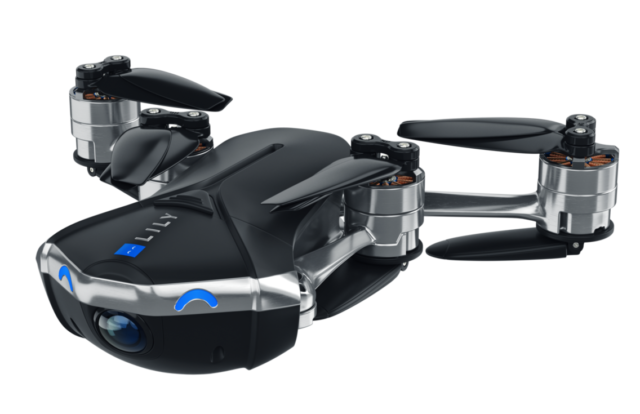 In this article you can find some informations about Lily Next-Gen Drone News. To begin, we can say that the Lily Drone is back and it’s better that it was. The new generation of drones are called Lily Next-Gen and are painted in black and blue and has a smiling face around the camera.

The Lily brand was sold to the Mota Group in January for $300,000. Another company bought the patents and around 70 prototypes of the Lily drone.

Mota company relaunched the Lily Next-Gen drones with 4K video capabilities and “follow-me” functions, which can make the drone to follow it’s user.

With just one click on the button you can capture specially moments with this brand new designed drone.

The device has also Dual GPS capacity, an 360° Orbit, automatic return to home options, video stabilization functions and so on.

You can also fly or land the drone with one touch. The device will remain stable thanks to its incorporated Smart Hover technology.

You can take the Lilly drone very easy everywhere due to the foldable legs and blades. You can pack it in backpacks or any other packing good, and have great fun. It has a weight of only 0.4kg, so you can say it’s a lightweight equipment.

Unlike it’s predecessors, the drones are not waterproof and nor can be tossed in the air, which were all specific to the Lily Next-Gen drones. This means, that the new generations are inferior products to the predecessor ones. Also as a drawback, comes the shorter flying times.

At a price of around $499 (pre-ordered) and $799 (fully equipped models), Lily Next-Gen is in a price range which includes models from manufacturers like Parrot and DJI, so the drones have competition. You can find a list of cheap drones any time.

The latest news regarding the Lily Next-Gen Drone show that you can have an easy-to-use device capable of shooting 4K videos and taking great photos with the 13Mp camera. With the new technologies included, the device is suitable for aerial photos and videos and also to have a great fun outdoor.

You can also find similar models from the competitors. Go ahead,  take a look and find the best drone for your demands.