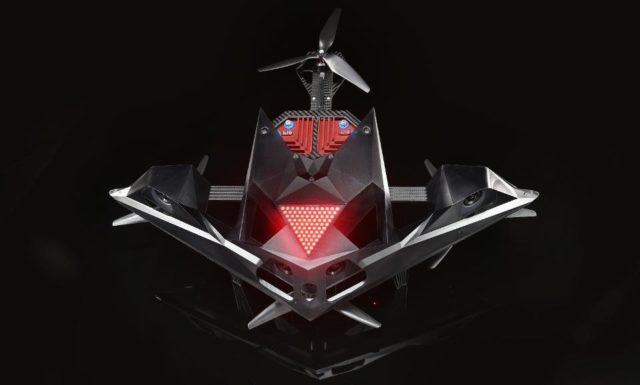 I know this is just a drone-related article, but I would give the subtitle for this article the following question “The end is near?”. Drone technology has never gone this far yet. And believe me, you’ve never seen anything like this. This drone was built to be the faster drone ever, and to win the Drone Racing League (DRL), I will talk about that later. Therefore a group of programmers came up with the idea of the self-controlled AI drone that can outsmart any human pilot and it’s called the RacerAI Drone.

This sentence can bring mixed feelings to everyone. First of all, it’s a good thing to know that our technology is really advanced because technology can give solutions to many of our problems. But those who watched a lot of sci-fi movies might think everything they watched may become real. So has technology gone too far or it’s just an innocent toy? Let’s find out together in this RacerAI Drone review.

What is the DRL?

As I told you before the drone was built to compete in the DRL a.k.a. Drone Racing League. DRL it the elite league of the drone racing competitions. You can’t just sign up to be a pilot here, only professional and dedicated pilots can be a competitor here. Just like in the Formula1. This is important because the drones are flying with a 90+ MPH. All drones are custom-built, so you can’t buy them in an online or offline store. The drone pilots are using FPV (First Person View) headsets so they have the sensation that they are in a fast machine flying through different places. They have arenas at different points of the earth and each arena is built like you’re in a video game.

The origin of the RacerAI

The AlphaPilot teams have been tasked with developing an AI pilot that can defeat any human drone pilot. The AI system must be capable of flying through gates on a racing course without GPS, data relay or human intervention. Nine teams of programmers and developers from around the world have been put together to code for months. In the end, they came up with the best software to control the Drone Racing League-designed RacerAI.The drone is built with four cameras, four propellers, and an Nvidia Xavier processor. Their masterpiece will debut at the Addition Financial Arena in Orlando, Florida.

However, the drone won’t be competing with human pilots, yet. The AI-based Racing Drones will have a special and easier courses that pit computer-piloted drones against each other. But these two categories will meet on December 6  when the best AI-piloted drone will take on a human pilot in Austin, Texas. The racetrack will be formed by straight lines and basic slaloming, with gates helpfully marked so they’re easy for computer vision systems to spot. In the beginning, the drone races will likely each take about a half minute. But as the drones are evolving the courses will too.

You might ask how exciting will be to watch these drone race against each other? At first, probably not much. But this is okay because these types of drones are the very beginning. They have to evolve a lot. And they can do this by competing against each other. Every AI system in chess that competed against humans and beat them was training against each other at first.

The nine programming teams were selected from more than 420 candidates, from all around the world. Their main purpose was to write a software that interprets data from the cameras and the drone’s inertial tracking system and then instructs the drone on how to fly.

The drone looks pretty much like a pistol crossbow. This has a great purpose to fulfill his destiny, to be the fastest drone alive. It has propellers on the front, on his left and right sides that are pointing downwards. The rear propeller points upward, keeping the drone in a perfect balance. It has two diagonal struts on the front that keeps the aircraft together, on each one of these struts are placed a pair of camera. The camera pairs can be used to see in 3D stereoscopically, like human eyes. With these two pairs that the drone has, the pilot can get a 3D vision ability for the entire 180-degree view. Above this drone has a red triangle that lights up the drone is turned on. This is just like any AI system that took over the world in the sci-fi movies.

But flying at a high speed like this has his disadvantages as well, the drone needs 40 watts of power to fly properly. And your phone’s processor uses only 2 to 6 Watts, just to help you imagine how much is that. And all this power with the size of the battery lets the drone fly only 2 or 3 minutes with a single charge of battery. But other high-quality racing drones from his league, that are piloted by humans can fly just as much.

The RacerAI drone must look frightening at first, but at this stage, you don’t have to worry about AI systems taking over. They depend very much on humans, and no matter how much better they will be, they will always have deficiencies in their system. At the moment the main problem with these drones is power-related. Because watching 1-minute races isn’t that exciting. But it has a good part as well, they aren’t a threat to us. Yet. Therefore, these drones are just innocent “toys” for our entertainment.