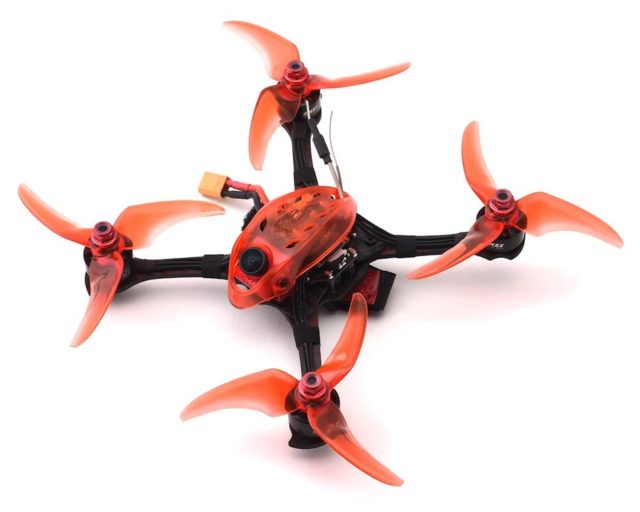 We got used to the fact that big drones like the DJI Phantom 4 have big props for better handling and controlling because of the more heavier and they are able to provide more power to the motors. However smaller FPV drones like the Larva X don’t need big props because of their lightweight, they are just as fast a bigger drone. So then why do you need a bridge between these two categories you might ask. And you ask that because you haven’t seen yet the brand new Emax Tinyhawk pro which has an incredible speed. You haven’t seen that speed on any of the 2 or 3-inch propeller based drones, and you what’s more incredible? This tiny guy can beat even some of the bigger drones with 5-inch props.

So there you have it, this guy forges the capabilities of big drones and the price and the size of a small drone. It has only one bad factor. Feeding such big props can take up much power and with a small battery, you have a reduced flight time. But if you are aware enough, you don’t have to worry that the battery dies in the middle of a race.  And another plus on the side on the Tinyhawk is the fact that is more durable. After a major crash, a big drone is a kind of useless. While a small drone can take up crashes more easily, and even if you crash a propeller or an arm you can change them anytime because you’ll get included in the package a spare set of arms and propellers.

The size of the drone is just a little bigger than a regular-sized palm. On the middle of the drone, there is a plastic beetle shell that protects the core of the drone. Both of the shell and the propellers has a dark orange colour with a little transparency which looks just incredible with the overall black colour of the drone. The drone is built from massive plastic which is durable and light, therefore it gives you excellent flight experience. However, there are some negative effects about that shell too. First of all, that plastic which is the Emax company signature design can’t perform a rollover (turtleback) when the drone lands on the back, because the propellers will be blocked.

Caddx made the camera for this drone. It’s a good company for this price range. You might have a few problems with focusing during the flight, at least some of the users said that. Besides that, you might face some isolation problems as well with the camera, like you can have dust on your camera which is quite unpleasant during a flight. As I told you in the specs part the camera is a CCD camera, not a CMOS one. To explain this shortly as possible most of the drone racers likes CCD better, it has lower resolution quality when we talk about dynamic range but it won’t have an image noise either which is a quite common negative thing in the CMOS cameras.

As you saw the drone has many pros and cons but the majority of the cons you will face while using it, because electronic devices don’t always work the same even if they are the same product. But the real question here is not why you should buy but who should buy it? And the answer is obviously drone racers. It’s a fast drone, with no intelligent flight options so I definitely would not recommend for you to buy it if you are a hobby drone user, or you want to take images or videos with the drone. The camera is good only to help you race or maybe to check out where is your football stuck on the roof, but no more. You can’t record fancy aerial footage with this one. But I would like to reduce even more the optimal future owners of this little guy.