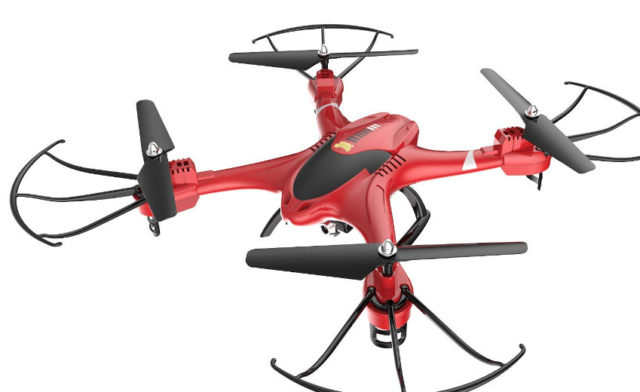 Some of you don’t want to spend hundreds of dollars on a drone, and it’s perfectly fine. Some of you just can’t afford them, or maybe you don’t see the purpose to buy an expensive one. In this article, we will show the best low budget drones, and they might be more satisfying than you think. Each of us wants something else from a drone, but there are a few things that should be among your first priorities when you’re looking for a drone. Your new drone should be as easy as control as possible, it should be a massive drone that survives minor crashes but you won’t find this out until you crash it yourself. Other things that is nice if a drone has are the metrics of the flight range and long flight time. So let’s find out together the Top Quadcopters Under $100.

The Holy Stone HS200  is a perfect start in your relationship with drones. It’s a beginner-friendly drone,  and the drone features a 2 MP camera along with advanced features such as return home, altitude hold, and one button take-offs and landings which is really useful for each and every drone virgin. This quadcopter is also a great beginner-friendly drone because it has four available speed modes, so you can learn at a slow speed how to fly a drone. This amazing drone isn’t just enjoyable and comes for a reasonable price, but it also looks really good. You won’t be ashamed of owning this drone.

You got a 3.7V 650 mAh battery included which will give you up to 9 minutes of flying time and it takes about an hour to charge. But if you got bored of this waiting you get some extra batteries due to the removable batteries. The controller lets the drone fly away up to 120, but when the FPV mode is active it’s limited to 50m.

The camera of the drone is a 2-megapixel 720p camera that allows you to stream, and record videos and images at a resolution of 1280 x 720 pixels. However, if you wish to record them you would need a memory card that’s enough to store all of your footage. The controller does not come with a screen, but it has a phone holder so you can use your smartphone to receive the FPV video feed.

Most of you already heard of the DJI company which among the best in the drone game. They usually make really great and expensive drone but now they came up with the Tello where they have the same quality with fewer flight options because they wanted to put this drone on the market with a lower price. Therefore, they made this drone with a limited budget.

The Tello’s best features are its great videography and photo modes. You are a little limited with the 5 MP camera but if you press a button on the app, you can access a few flight options. You can tell the drone to film while flying up or backward or while circling around a subject, therefore you are able to make awesome transactions when you edit the videos. And if you’re not at a good level of controlling the drone DJI got you. The Tello can sense obstacles underneath him, this function is most important when you execute a takeoff or a landing. But unfortunately, it can’t avoid obstacles that come from the sides as more expensive drones can.

The built-in camera can take 5 MP pictures and 720p videos. Your mobile might have a better camera but this drone has a better camera than drones in this price range. You can access the Telo app which is available for both Android and iOs, therefore, you got a live view from the drone’s camera which makes it easier to get a nicely framed shot.

The MJX X400W  is a compact drone that has a good build quality and it’s built from a tough and flexible body. For the joy of the beginners, the propeller guards will help to avoid any damage to the drone or the surroundings. The red accents on the white body make for an elegant design. The drone looks pretty much like a spaceship, so if you are a Star Wars or Star Trek fan this is definitely for you.

This drone handles well when flying, it’s really responsive to all of your commands. The climb and turning rates are very good and provide a performance to satisfy even experienced drone users as well. Because of the 6 axis gyros the drone has very good stability even in windy conditions, so you can use it in almost every condition.

The FPV stream is available via  Wifi, and you can view it on your smartphone using an installed app that is also available to all of the operating systems. The camera can be activated using both the RC or the app to record photos and videos, however, you can see more details when you are using the phone. The camera which is capable of recording in HD 720p has decent quality and provides sharp images and videos, it can’t be used on high levels but it’s enough to save sweet memories for yourself.

The Syma X5C-1  is one of the best drones under 100 dollars and it’s a great choice for new drone pilots. This drone is of a good quality build, and is very fun to fly, until you can, because besides all the pros there are some cons as well, like the short flight range, and the low-quality camera. Also if you enable all the features the flight time is reduced to 5 min, and it takes around one hour to charge it back. Along with its great flight performance, you will find that this drone is also quieter than most which are because of the brushless motor that has a lot of advantages. The enclosed bottom battery bay gives the X5C-1 a sleek look, that hides all wires and helps the aerodynamics as well.

After you ordered the drone you will find along the The X5C-1 quadcopter an extra set of propellers, a 500 mAh 3.7V battery with a USB charger (it’s advised to use only that for charging),a screwdriver, a transmitter, a micro SD card reader, a 4GB SD card, and the users manual where you can find a lot of useful information about the smart options the drone has.

This drone comes with the typical high and low-speed modes which is great for every beginner. In the lower speed setting, the drone is easier to control and you have higher chances not to break anything. For more experienced flyers who want to go faster, simply switch in on the higher mode, therefore, you’ll get more fun. You can also do flips at the push of a button. This drone comes equipped with a camera that is capable of recording in photos with 2 MP camera and take 720p videos. The camera doesn’t take really clear photos and videos given its low price. This drone makes a great trainer that you can have minor crashes repeatedly without worrying about damaging the quadcopter.

At first look, you can tell (if you’re an expert in drones) that this one was made after the DJI’s great creation the Mavic pro. But just on the outside, inside the two drones are very different. The Eachine E58 can do less than a DJI Mavic, but for such a price it’s forgivable. Thanks to the foldable design the drone is really easy to transport This aircraft is a very stable quadcopter that fights the wind efficiently. But don’t be confused about the strong motors, this drone isn’t the fastest drone on the market, and just like the others, it’s really  It’s beginner-friendly.

You can fly the drone for like 9 minutes with one charge, and it takes approximately one hour to charge it back fully. However, you can buy an additional 3 batteries for around 100$ if you don’t like waiting one hour before having another 10 minutes of fun.

The built-in camera is 2MP with 720p resolution and wide-angle and surprisingly better quality than most people had expected. Live Video transmission has no lag, which is amazing detail in our opinion and this helps a lot your FPV experience. This is due to the fact that the drone store the footage directly on a MicroSD card, the drone can’t record automatically on your phone so be careful to always have some free space on your card.

Besides the fact that the drone isn’t a perfect match for the DJI Mavic its ability for a lot of features that the Mavic can do it too. These features or intelligent flight modes are the following: Headless Mode, Altitude Hold, Gravity Sensor, Automatic Takeoff and Landing, 3D flips, Out of Range safety. These features can improve your fun while flying the drone.

It’s one of the best quadcopters for under $100. It’s one of the top-rated bestsellers ever. Luckily, this amazing drone is still available in most of the online markets. Not just it has an amazing value for the money, but it comes with a complete FPV package. That’s right, it may not be the best drone on the list but the Remote Controller comes with compensates for everything. You don’t have to pull out your phone all the time to put in on the RC because it has its own big LCD screen that shows you everything your phone can.

But let’s talk about the biggest minus as well. The built-in camera is just, 0.3MP 480p resolution camera. The other disappointing thing about the drone is the fact that isn’t able to do any intelligent flight options like a return home, automatic landing, etc. The only thing this drone is capable of is making 3D flips and transmitting live to his own display.

This drone may be different from the other, but that’s okay because we all are different and we have different tastes. At first, when you hold the UDI 818A it might look a bit flimsy because of the lightweight but that only helps the aerodynamics. The drone is kind of a massive one, and the 360-degree propeller guards keep the drone safe for any minor crashes.

The wide space propellers provide for increases the stability while flying and makes this drone easy to fly, even when there are weak winds out there. This drone has a low-speed mode for beginners, and after you mastered the control of the drone you can change the speed to a higher one.

This drone is based on a design that is a few years old, so it does not have an altitude hold function so you always have to keep your hands on the RC. However, it does feature a headless mode which is great for filmmaking. And it also has a one-key return to the pilot function. It can also perform flips at a push of a button, which isn’t the most useful feature but it can be entertaining for your audience.

The included HD camera which is the only 1MP is and it’s able to catch videos in 720p in a 1280 x 720 resolution. Therefore the image quality is somewhere between low to average. The drone isn’t capable of FPV transmission, so the images and videos are stored on the SD card.