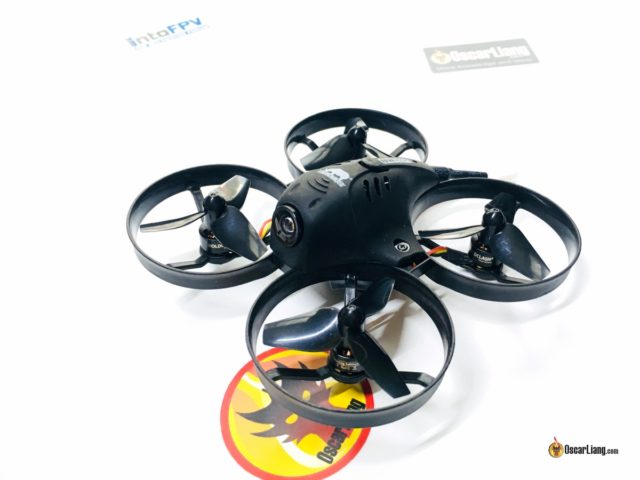 The BWhoop B06 made by BoldClash is a whoop drone which means that is really small, only 8cm in width and length as well (without the camera). Most of the time they have a brushed motor and an FPV camera because usually these guys are controlled by wearing an FPV headset. They are ideal for indoor, capable of flips, rolls and fast climbs due to their power to weight. But don’t let the size fool you because these drones are capable of achieving incredible speeds, that’s why they are used for racing.

These tiny whoops comes in all shapes and forms, and all of them are below the standard 8cm. You might ask what can be so different about these drones. Like all of the persons have the same standards, but different personalities these drones to have different “personalities” and styles. They are fun to fly and because of their low price, it might be a good hobby to collect them. If you want to know what’s so special about these whops, and especially in the B006 read this BoldClash BWhoop B06 review to find out more about the world of tiny whoops.

The BWhoop B6 comes in a nice transparent box that looks a lot like a lunch box, so from 8:00 to 16:00, you can have your lunch in the box and from 16:00 to 20:00 you can store your drone in the box (kidding, don’t use it for your lunch). But let’s see all the well organized parts that you’ll find in this awesome box:

The distance from motor to the motor is 77mm and the quad weighs around 28g, this weight is without the battery. The BWhoop is bigger than a traditional Tiny Whoop due to the larger 40mm propellers. A usual whoop has only 31mm. But most of the users find this motor and propeller combination more efficient and powerful during the flight. The video transmitter is placed beside the camera and the flight controller is at the very bottom of the drone, that’s why you have to be careful with the landings. You can access both of them by removing the screws alongside with the shell. Also, the FC is soft mounted, this way the vibration caused by the motors is reduced.

Looking at the drone you can observe that is looking really good, and it’s well-protected. The drone looks pretty basic, which is good for a person who like the minimalist style, like me. It doesn’t have a ugly antenna that is coming out from the body. Which also has its pros and cons. Aesthetically it’s a better choice, but practically it’s not that good idea. When the antenna doesn’t face the direction of the controller it loses signal. Having a vertical antenna gives you a better range in both the control and in the FPV distance as well.

It has a really serious and professional style, and the black color is just a perfect choice. You also have a white canopy, and propellers so if you like you can have a white drone, but I would stick with the black color. Around each propeller, there is a propeller guard to ensure the safety of the drone in the case of a crash. The body is also well protected with that black shell. Both the body and propeller guards can be removed by unscrewing the screws.

The quad is preinstalled and physically it’s ready to fly from the moment you took it out from the box. But first you will have to connect it to a receiver, for that you just have to follow everything that’s in the users manual (if you haven’t done that before). The drone also has Betaflight 3.1.6, and the ESC’s are BLHeli ESC so you can only run Oneshot125 with them. If you want to update the firmware on the flight controller, you will have to select SPRacing F3 board.

You will find the radio receiver located on the bottom of the FC. There are many options for radio receivers when purchasing this quad, including the most popular like Flysky, Futaba and Spectrum.

The BWhoop B06 also uses brushless motors other than a brushed motors which has a lot of benefits. Brushed motors is known to burn out easily, and if not, they do wear out after about 10 hours of flight time on average. But brushless motors has a longer, better performance and they make less noise. The only bad side about the brushless motors is the fact that they are a bit heavier, and don’t forget that in the case of a tiny drone every gram matters, but with enough power, the weight doesn’t have to be a problem. Therefore it’s still a better choice to buy a brushless motor drone when you’re looking for a drone.

It’s really easy to fly the drone. The powerful little motors are capable to fly even in windy conditions. The drone will fly quite good, but you’ll have a sensation that something holds you back, so for a better performance, it’s better to use it in clear conditions or to use it indoors. Don’t worry, with a little attention you won’t break a single thing.

The FPV works great on the drone, you gonna get a clear image as possible from the 800TVL 120 FOV camera. But from a certain distance, the image will start to glitch so pay attention to your distance where the FPV doesn’t work that well. You can change the channels by pressing the button that is placed on the top of the quad. Also, the camera can be adjusted 10 degrees.

The flight time for this little quadcopter is 4 minutes, give or take a few seconds. The drone doesn’t have any intelligent flight mode so don’t expect it to return home automatically. To be sure that the drone won’t fall down and it gets “home” safe set a timer for 3 minutes 30 seconds, and when that is over go on and change the batteries (if you have a spare set).  The flight time might seem little but comparing to other whoops it is actually a good time.

Overall the drone is built very well. Both beginners and the more advanced users will enjoy using it. The flight experience is just great with this little aircraft. The drone has a stable flight and still has maneuverability and moves really quick. And that’s pretty much everything you need in a drone race or from a drone in general. It’s also capable of flying in acro mode, so you can execute flips and rolls with it. It also has brushless motors, which is pretty unique. It’s built with 450mAh/80C LiPo battery which is capable of flying for about 4 minutes, which is just great. It also has some minor disadvantages. Like it’s heavier with 7 grams from his little brother the B05. It doesn’t have any safety process in his software, so it won’t notify you when the battery is low. I say having only these few disadvantages is a good thing. You clearly won’t find a drone which is perfect. But this one is pretty close to it.

If you’re interested in purchasing the drone, check out Boldclash.