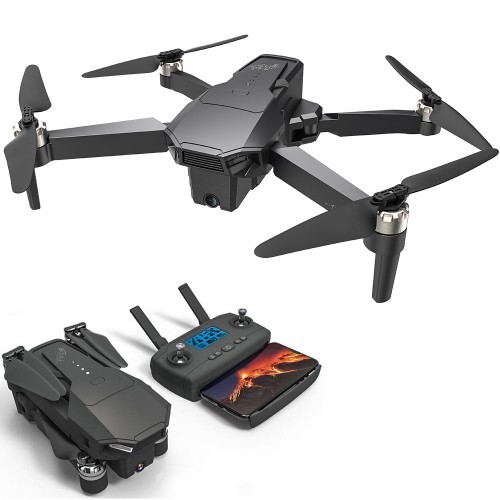 For sure, many wish to own a high-end drone like the Mavic Air 2. But in that case, the quality you wish for has a really high price that not all of us can afford. However, we have some great news, there is the KaiFeng KF107 with GPS and 4K camera which you can get for just 200 bucks. It not just works great but also features a foldable design, a nice flight range, and excellent battery life.

So if you look for a low-budget drone that can keep up with most of the drones on the market this is the drone you should go with. Even if you are a beginner there is no need to worry about controlling this drone because it has a well-written manual and some intelligent flight features that will make it easier to create cinematic footages.

The drone has a foldable design, but rather than on the sides, the arms will fold on and under the drone, this way saving more space on the sides. The drone is covered with black ABS plastic which is durable enough to survive minor crashes and light enough not to overload the motors.

The drone measures 11 x 17.7 x 7.8cm when it’s folded and 42 x 32 x 7.8cm when you unfold it, so as you can see it the length will be just one-third of its full size. The drone weighs only 500 grams, so you still need to register it to the FAA. At the end of each arm, there is an 1806 brushless motor, and under that, there are the LED lights will help you in the visual orientation of the drone.

The battery for this drone is a 3000mAh one which will give the drone enough power to fly it for 25 minutes. However, if you have a more aggressive flight style and you often use your intelligent flight options, the time may be even less. But some sellers can offer you a package with multiple batteries. So if the time is not enough for you just go with multiple battery options. To fully charge your battery you will need to charge them for 180 minutes.

The controller is a stylish little device. The phone holder on this thing is foldable just like the drone itself. The controller connects to the drone on a 2.4GHz bandwidth. The connection is strong enough to give the drone a 1500 meter flight range, that’s more than 1KM, which should be enough for anything you want to capture.

The package includes a lithium-ion battery for the controller, so you don’t have to mess with cell batteries. Also, the FPV on the drone works with a 5G connection, so your phone should be 5G available in order to watch the FPV. On the controller, there are some buttons for different functions like the return home function. Also, on the controller, there is an LCD screen which shows you different information about your drone and it’s orientation.

The camera on the KainFeng KF107 is a 4K HD camera. For photos, it can make photos in 4096×3072 and the max resolution for video is 2048×1088 at 25FPS. But if you reduce the resolution you can capture in higher frames per second. The camera has a built-in image stabilizer, so even if you capture something while flying your image will be stable. The camera angle can be adjusted with 90 degrees, the angle can be adjusted remotely from the controller. Also, there is a secondary camera on the bottom which works as a sensor as well. You can use that camera for recording, but it will have a pretty bad resolution.

This drone is a great choice for every person that wants to get a high-quality drone for less than $200. It has great potential for making good footage. First of all, it has a 4K capable camera, which pairs with 25 minutes of flight time and a 1.5Km flight range. This will give you enough freedom to make awesome aerial footage. But that’s not everything, the drone also has intelligent flight modes and a GPS positioning system which will help you in the positioning with the drone. And on top of that, it has a foldable design and a transport bag in which you can keep the drone when you travel with it. That being said, overall it’s a great drone which is a has a great price-value rate.

If you wish to get a KaiFeng KF107 you can order yours from Gearbest or Baggood.