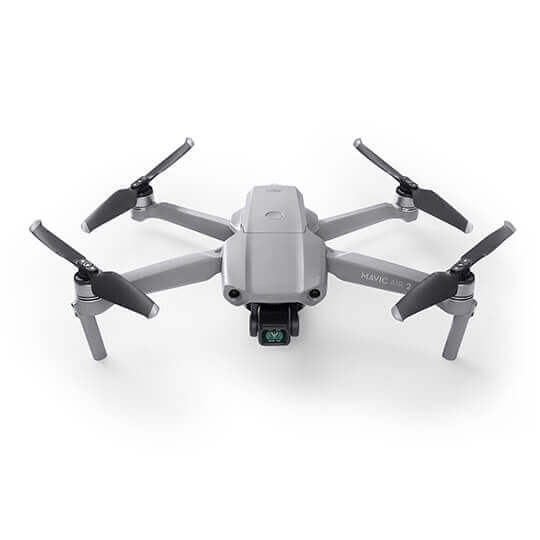 Could this model be the first ”crossover” drone? There have been many rumors going around about the Air 2S, and it seems they might get closer and closer to the truth. Even though the FPV Combo was a huge breakthrough for FPV fans, flying a regular quadcopter in an aerobatic style is just not the same. Therefore, is the DJI Air 2S: ‘S’ for “Sport” – An Upcoming Drone? Will it be the one to make everyone happy?

The best way we could describe the DJI Air 2S is somewhere between a folding quadcopter and an FPV one. This model could be a great choice for people who want to experiment with FPV but still are not ready to commit fully. It is a frequently met phenomenon, simply because many beginners quickly crash their FPV drones and, to be fair, we would also prefer a simpler version at first rather than crashing it on the first try and seeing our money go down the drain. Taking into consideration the fact that the name is ”2S”, rather than ”3”, it is expected that the updates will not be huge, but simply a few improvements that will tweak the model and make it more fun and accessible for the users.

Therefore, let’s see what specifications we can expect from this highly rumored drone.

One detail about the obstacle avoidance sensors makes us believe that this new model might be something more than just a quadcopter. They are located at the front of the drone, just above the forward vision sensors, tilted slightly forward. Because of this, the drone will be able to sense an incredible amount of space in front of it.

Usually, all the other models have the sensors located at the rear of the aircraft, which is an appropriate feature for quadcopters that are only used for photographic and video graphic purposes. On the other hand, placing them at the front means it will make it much easier for the drone to avoid obstacles, even at higher speeds, because of how much space it can capture.

One aspect that took us by surprise though, was that the drone will lack side vision sensors. This is quite important, and you can understand what we mean especially if you have ever tried to fly a Mini 2 in Circle Quickshot. Most pilots are so used to the 360 degrees obstacle avoidance that anything shorter than that can cause some issues even for the more experienced ones. Even so, by far it is pretty clear that the Air 2S is planning to offer a FPV opportunity, considering it has 20MP, 1” CMOS sensor and 4K 60 FPS video.

This is very believable, as the Mavic Air 2 had OcuSync 2.0, it is almost logical for the Air 2S to be packed with OcuSync 3.0. This would make it possible for the drone to have an improved latency, hence easier high-speed flying. Some might ask why the need for goggles? Well, the truth is that it is simply more fun this way, and also way more immersive. Many people are simply mesmerized by that bird’s-eye view, without needing to perform any stunts, loops, or rolls.

The best proof for this is the launch of the original Mavic Pro. Back then, that was the time when the goggles were also revealed. People were just as excited about both of them. Some even had the chance to try them on, while a few DJI employees flew the drones in a small safe zone. Even in these conditions, the fans were blown away. So, it is clear that there is a market for the FPV experience, even without the acrobatics.

If we were to look back, we can all remember when the original Mavic Mini was quickly replaced with the DJI Mini 2. Reportedly, this happened because the CEO was not pleased with the camera quality of the Mavic Mini. We can expect the same in this case. So there is a chance that the Air 2S will come with an improved camera. Even though the Mavic Air 2 already has an amazing one.

There have been rumors about an IMX686 sensor that will be able to capture 64 MP photos and 4K, 60 FPS videos. Therefore, anything is possible!

At the release of the Mavic Air 2, the company proudly announced that the drone will have an ADS-B receiver. It lets the pilot know if there are other drones flying around. The disappointment came when it became apparent that only the models in North America had that feature.

This might be the chance for DJI to make up for it, and include the receiver in this new model. And also make it available to everyone.

For many of us, when we see the letter ”S” in a model, we think about ”Sport”. While this is very possible, there are also quite a couple other options. Either ”Slim”, as for a smaller version, or ”Stripped in weight”, so the drone might be below 500 grams. The latter option is not as believable, because we expect that it would be quite hard to make the drone this lightweight. Our guess still centers around the ”Sport” version, considering the improvement in the obstacle avoidance sensors.

In conclusion, there are a few things to get excited about. Especially because quite a few of these rumors seem to be close to the truth. Even so, we can not say anything for sure, until we see the official release. It might be sooner than we expect! So, make sure to keep an eye on the DJI official website. And all their other social media, Facebook, Twitter and Youtube. We are just as excited as you are, especially to see if we got any of these rumors right!