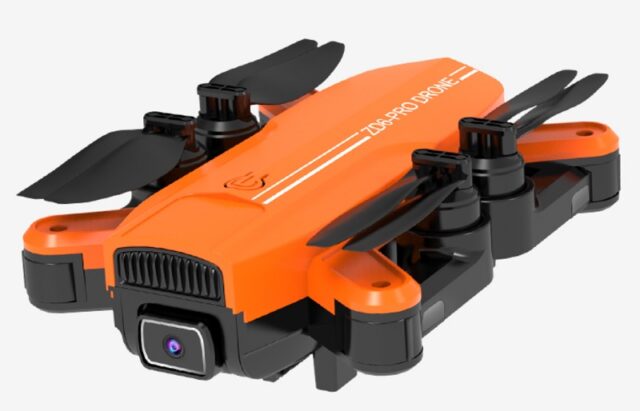 Not so long ago, we’ve seen the Funsky S20 and now we’ll have a chance to take a closer look at the FUNSKY ZD6 PRO which is a Foldable Quadcopter that has been released recently. It has amazing specs and some quite particular features, and all that for an entry-level price. The most amazing things about this drone are the foldable design and the 6K resolution camera.

Up to 500 meters far off distance;

Around 28 minutes of perseverance time.

As we told in the introduction, it has a foldable design. The general build has nothing extraordinary in it. It has four arms with a pair of propellers at the end of each. The power button is placed on the top of the drone, and the camera is placed in front of them, just like we’re used to from a drone.

The only thing that can be modified is the color you wish your drone to be. The FUNSKY ZD6 PRO can be ordered in three different colors: orange, black and white.

The drone comes with a 7.6V/1600mAh that can let the drone fly for 28 minutes. This number is great when you compare it to other drones. The battery is a modular LiPo battery that is safe to handle by anyone. With the battery, there is a provided USB cable. For the battery’s safety use only that for charging the battery.

As for the range, the drone works with a 5Ghz frequency, that can let the drone fly as far as 500 meters. This is not the greatest you can find on a drone, but at least you can always have your drone insight

One of the greatest features of the drone is the dual positioning system (GPS + OFP). Besides, it has safety features such as fly back home. This activates automatically when the drone is about to exit the maximum range or when the battery is going low.

However, there is more. The drone has some intelligent flight features as well, like optical flow, waypoint flight, intelligent following system, gesture control. After you get to master all these features, it will be easier to make amazing footage with the 6K camera built-in camera.