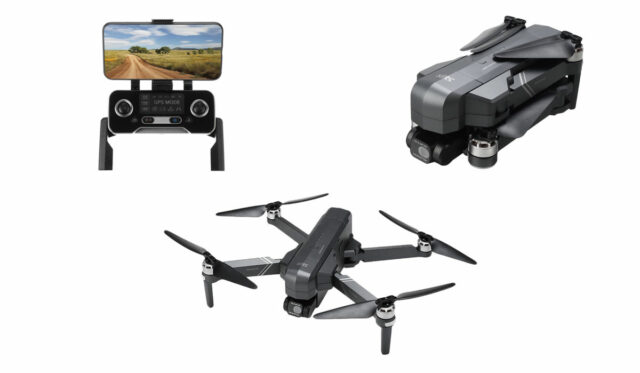 SJRC F11S 4K PRO Drone is the new generation ‘S’ version of the SJRC F11 4K Pro. This drone is produced by SJRC. This brand is known for making super good products at very affordable prices.

SJRC F11S PRO is a powerful drone with a high-resolution 4K camera, GPS and FPV via WiFi.

F11S Pro is additionally equipped with quality brushless motors that create lots of power and flight time being up to 26 minutes. The 3S LPO package can be properly charged via the USB Type-C port.

The drone has the function of safe return home, and thanks to it the SJRC F11S 4K Pro automatically returns to the take-off point in case of loss of the RC signal or the low voltage of the flight battery. In addition, RTH can be triggered manually.

SJRC F11S PRO is portable and very easy to carry, it has a system of folding arms that allow you to carry it without inconvenience. These kinds of drones are much easier to handle compared to the larger and bulkier ones, so they can be put in a suitcase and be easily transported on any trip.

Compared to other drones, the SJRC F11S 4K Pro drone is better due to its multiple features. It is an intelligent drone, GPS is very useful in exceptional situations and offers more security. The fact that it is so easy to carry is definitely a plus for those who travel and want to include it in the suitcase in its EVA case.

The photo and video quality and the flight duration recommend it because it offers a satisfying experience to the one who uses it. With a 4K HD camera, this drone can capture amazing images and videos from the sky. The onboard SD card allows you to record videos and photos at 4K resolution, as well as on the phone via WiFi at 720p resolution.

The safe return home function makes the SJRC F11S 4K Pro drone much safer. It automatically returns to the take-off point if the signal is lost or the flight battery runs out.

Thanks to all these features, this drone is also suitable for beginners, because they do not have to worry about orientation and with the push of a button, it comes back.

And besides all this, the SJRC F11S 4K Pro is also available at a fairly affordable price.