There are few strange drones on the market and in this TYRC TY6 Sky Overlord Quadcopter review you’ll see one more. In the last years, new strange-looking drones appeared, like ROVA, which is a flying square.

For just $49, you’ll get a drone which is the size of a smartphone while folded. It doesn’t have the regular foldable arms. Now that I think of it, I don’t know what to say, where the arms start and ends. Because of this, I’ll speak more about its features, rather than it looks. What is easy to understand from its appearance is how easy this drone can be carried away and does not have a regular controller.

Mainly, this drone was made to be flown indoor, being able to take off and land from you hand. Also, if the weather is calm, you can try to take it outside, but be careful.

The TYRC TY6 Sky Overlord Quadcopter has many flight features. It has Altitude hold, Headless mode, G sensor, 3 flight speeds and since there is no real controller, it uses Fly-by-app.

In case you wonder what is an Altitude hold, it’s a feature very common. This feature makes the drone hover in place. The Headless mode makes the drone easy to fly, not having to worry about its real orientation.

The G sensor however is something that is not really common. While connected to your phone, you can control the quad by tilting your phone. 3 flight speeds are great for precise flight maneuvers and Fly-by-app means that you need to be connected to you phone in order to pilot the drone. 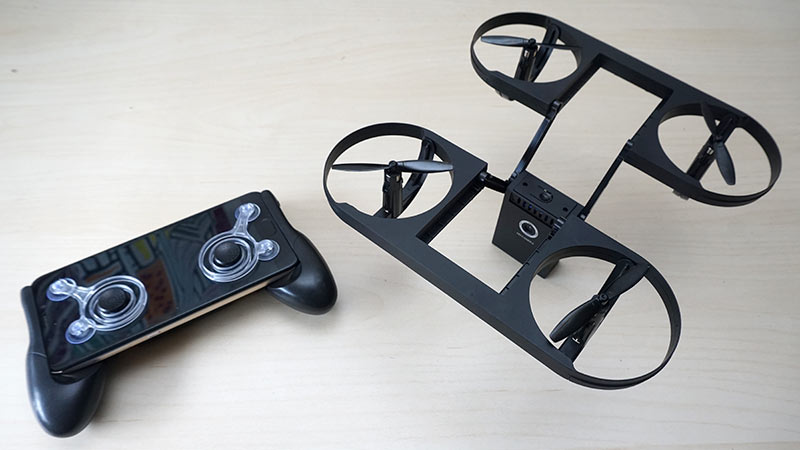 While unfolded, the camera is right at the bottom, offering a good center of gravity that helps you record smooth films. the TYRC TY6 Sky Overlord drone uses a 720 HD camera and the video is viewed and recorded to your phone through FYD FPV app.

The 3.7V 750mAh LiPo battery offers 5 minutes of flight and the control distance is about 30 meters.

As has been noted, this is a drone designed for indoor flight and while folded, becomes really portable.