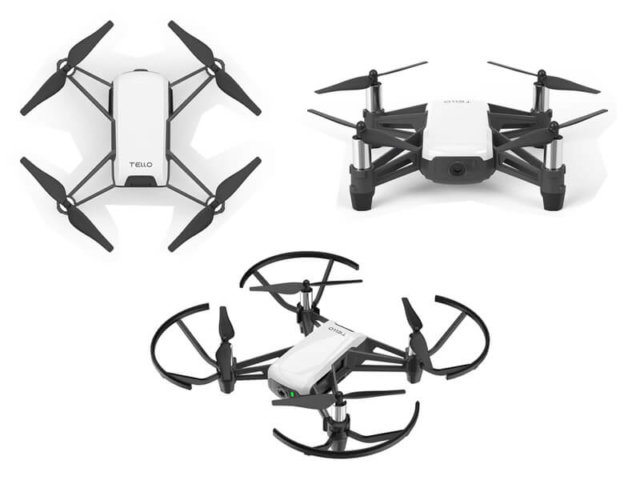 As large a demand there is for high-tech and heavy drones, we can also admit the desire for small, affordable drones for beginners. Drawing inspiration from one of their larger models, DJI brings out something to appeal to their younger customers. So, it could be said it is an indoor-intended toy drone. Though it has an impressive set of assets for something that would be found within that very category. Let’s get deeper into that and begin the DJI Tello Quadcopter review to uncover this recent model’s pros and cons. 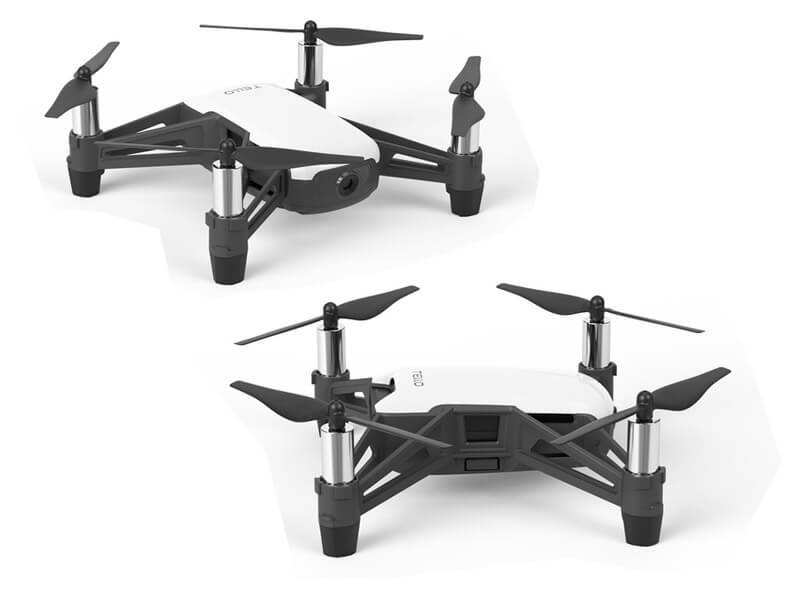 Coding was first used by Parrot with their AR Drone and more recently Mambo. They used Tynker, which is a similar language to the one that is found in DJI Tello Quadcopter. All in all, there are not many drones that you can easily program, but this feature should be seen more and more in the next future.

One of the most important features for this drone is the ability to program it to fly like you want. You don’t need great coding skills. However, it can be confusing the first time. Therefore, you might want to watch on Youtube something like “how to program your Tello with Scratch”. In case you didn’t know, Scratch is a programming language developed at MIT that is targeted at children. So, after a 5 minute tutorial, you should be able to program your own flight. Therefore, this drone can be the best quad for a kid. It’s fun, educational, and just $100.

While programming it, you can make it fly specific routes based on the code you wrote. Like I said before, even though there is no manual to tell you what to do, learning to program this little guy is not difficult at all. After all, it’s meant for kids and this coding will let you fly the drone without a proper controller. Since there is no RC, you’ll either fly it ‘by coding‘ or from a phone via its app. Of course, like in most cases, using your phone as a remote controller can give you a bulky feeling that we don’t actually like.

Talking about controlling the drone through a phone, there are many devices that are compatible with Tello. Also, if you don’t see your device among the others, don’t worry, because they are constantly upgrading the list. If you are an Apple user, it requires IOS 9.0 or later. The phones are: iPhone 5s, iPhone SE, iPhone6, iPhone 6 Plus, iPhone 6s, iPhone 6s Plus, iPhone 7, iPhone 7 Plus, iPhone 8, iPhone 8 Plus, iPhone X, iPad mini 4, iPad mini 4 Wi-Fi + Cellular. 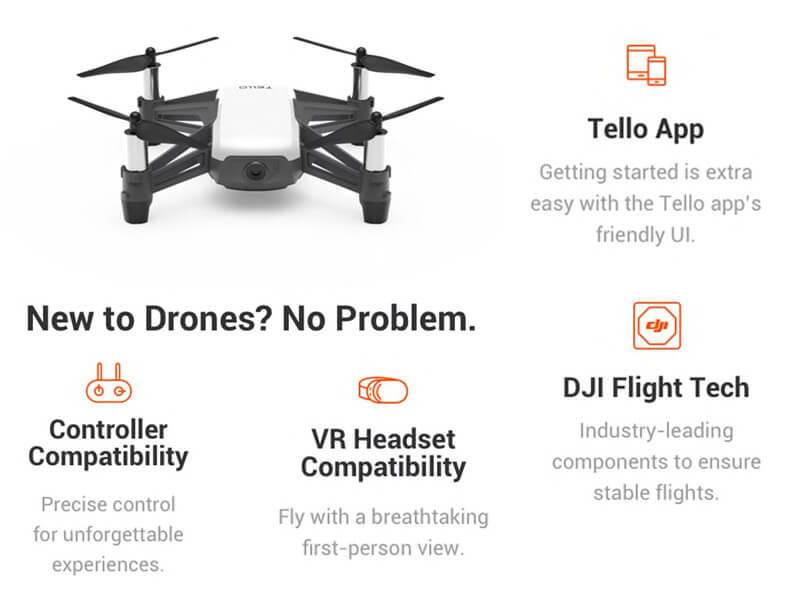 The IR Sensors of Tello

If the coding part didn’t impress you enough, well the IR sensors should. Firstly, there are no IR sensors for a drone that is cheaper than $300. Secondly, these sensors make the DJI Tello Quadcopter become extremely stable in all directions. This is really helpful especially while taking off from a bad surface and when avoiding obstacles.

Every flight begins with a takeoff. Usually you let the drone on a hard flat surface and just increase the throttle. Well, you can do that with DJI Tello Quadcopter but there two more ways to do it. I’m talking about the take-off from you palm feature. Thanks to its IR sensors, this little quad can safely take off from your child palm.

The other way to start flying is simply throwing it in the air. Because of the “the throw & Go feature” the drone will start flying as soon as it gets airborne. To do it you simply have to select the throw and go feature from the flight menu, then simply throw it. Doing this can be scary for the first time. We don’t want to break a DJI drone, do we? Therefore, the first time you might want to try this feature over a soft surface, just in case.

Tello Can Be Flown by Everybody 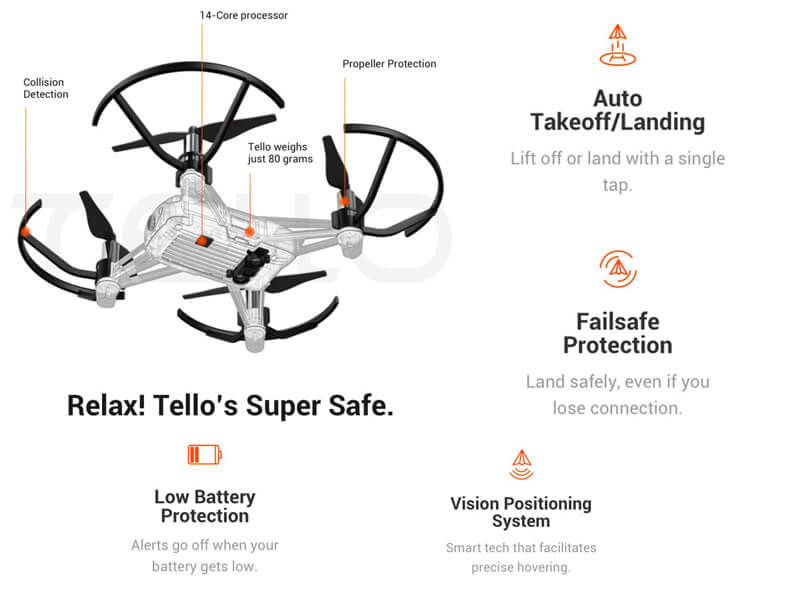 In fact, the DJI Tello Quadcopter is intended to be a beginner-friendly drone. Also, the quad is for those who want to learn and have a great time while at it. This drone is small and compact, factoring in a 80g total weight. All this with a frame that is not larger than average adult palm. Moreover, it features brush-less motors with extended rotor bases to be used as landing arms and is able to perform some daring stunts, live stream too. Its camera is a 5MP one, capable of capturing 720p video – definitely not the best, but more than decent for the model at hand. Additionally, it has image stabilization software, to help enhance the quality of pictures and frames recorded. What’s more, it can be connected to a VR set in order to get a first-person view while using it!

Like I said, there is a digital image stabilization to compensate the absence of a gimbal. However, the recording will get affected if there is a small wind. Moreover, this feature is also found in Parrot Bebop and it has its perks.

The estimated flight time of the Tello is a more than average 13 minutes. In case you’re not satisfied with its flight-time, you can buy a spare battery here. Even if it will probably do better inside, it can be used outside too, provided the weather is calm. Safety is also not disregarded, what with the propeller guards and intelligent software which offers you features such as low-battery warnings, automatic landing and takeoff, or vision-positioning system. There is a lot of room to add and customize (from accessories to trajectory and flips). 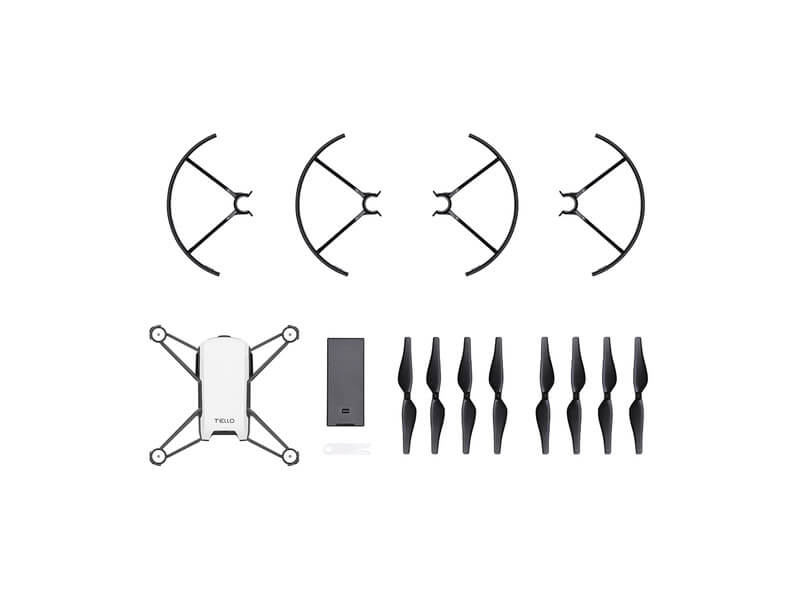 As has been noted, Tello can do many things and all that comes for a small price of $100. If a small, cheap drone for a newbie flyer is what you need, the DJI Tello Quadcopter will likely impress you. Moreover, we can finally say that everybody can buy a DJI drone.