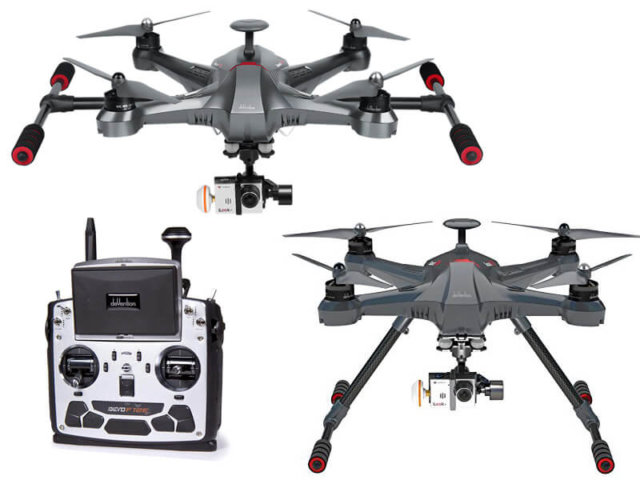 Walkera Scout X4 Quadcopter Review – One Of The Best Quadcopters

The Walkera Scout X4 quadcopter it’s still keeping its promise in bringing new life to aerial photography, it is around for quite some time and it’s still keeping up with all the new and demanding drones. Quadcopter companies release new drone models as fast as they can fly. For example, the DJI Phantom which shook the multirotor market a few years back is now losing ground because newer models push further in drone sophistication. 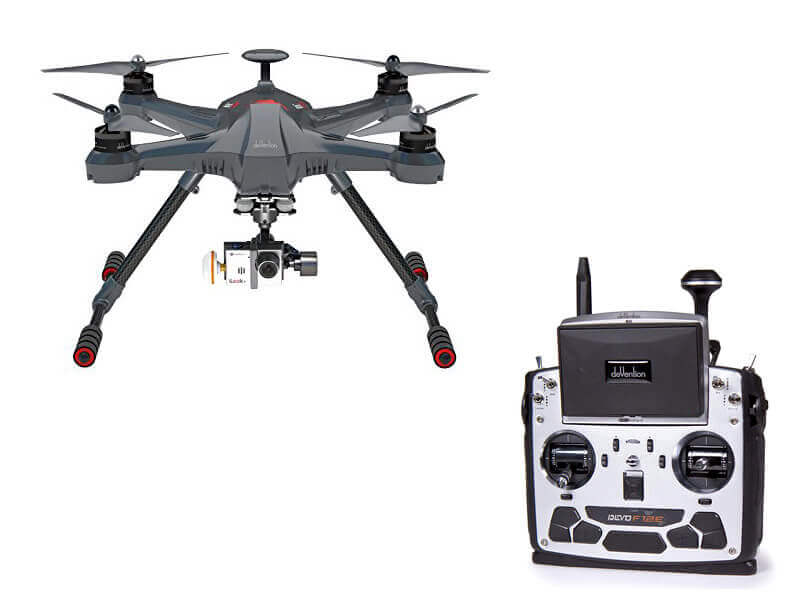 But the Walkera Scout X4 is still an exception. It comes with multiple features like long battery life, GPS mapping track, a mini octocopter because of extra motors and it can be set to follow its owner via a smartphone app, again with the help of GPS. With so many features, pilots can take amazing aerial images and it helps the drone keeping up with the demands and face the newer drone models.

The Walkera Scout X4 quadcopter it is an attractive option for those who want a drone that can be upgraded to an octocopter. The answer is in Scout’s X8 upgrade kit which transforms the Scout X4 into a compact octocopter.

An upgrade kit is an attractive option for those who want to increase the capacity of Walkera Scout X4 quadcopter. The feature enables double rotor count and the lifting capacity is twice better than as a standard Walkera Scout X4 quadcopter. The Scout X8 kit for the standard Scout X4 needs to be bought separately and it comes with all the tools required for an upgrade to an octocopter. However, because of the extra motors, the battery will be drain faster and the flight time will be shortened.

The Walkera Scout X4 quadcopter is a great alternative for expensive high-end drones and is keeping the demands of the multirotor market with these flight features:

There is a possibility to buy this quad with a stylish aluminum case. On the other hand, this depends on the seller and the package’s content should be checked, in order to see if the seller provides with everything you want before purchase.

Usually, the quadcopter comes with the following: 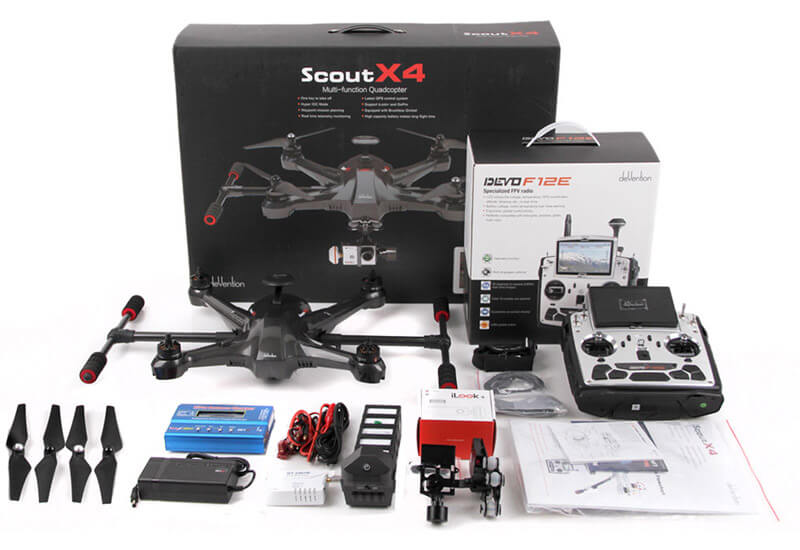 Once you receive the delivery, you can take the drone out of the package, place the gimbal, the camera, charge the battery and read the manual. Some say that the manual is too difficult to understand but you can access YouTube or Facebook for more information.

This drone has incredible horsepower and the materials used on the body and rotors are strong and lightweight made of plastic and carbon fiber.

The quadcopter also had a retractable landing gear. If you want to choose another gimbal, the long legs allow for plenty of space. However, you should watch out for the landing and be easy on them, the legs are pretty fragile.

Many pilots claim that the Walker Scout X4 quadcopter is very durable and the drone stays stable even after losing a prop of a motor. The drone is available in black, white and gray.

The 5400mAh battery is a powerful one and it will give to the Walkera Scout X4 about 25 minutes of flight time.

However, the flight time will shorten if you add a heavier camera.  This is not a specific product problem and it happens to every drone out there. In addition to its built-in components, the Scout X4 can carry 500 grams, which means that you can easily add an average GoPro action camera.

The Walkera Scout X4 quadcopter uses the DEVO F12E controller, it is a versatile open-source APM fight controller by ArduPilot. It is an upgrade version of Walkera DEVO 12S RC controller and it has a new design and a 5-inch FPV LCD screen. You can simply connect the flight controller to a computer via a USB cable to configure it and start flying around. The controller has a 3000mAh Li-Po battery.

The DEVO F12E controller has some interesting features like:

You can navigate by using Google Maps, all you have to do is to download a free Mission Planner software. A total of 128 waypoints can be used in a single mission with different parameters, such as altitude.

The high-quality controls of auto-level and auto altitude allow you to fly level and straight. You can also use the “simple flight” mode, which makes the Walkera Scout X4 quadcopter one of the easiest drones to fly.

One great thing about this controller is that no programming is required. You can use an easy desktop utility to load the software with one click. This way you can set up the controller with quick visual displays, a point-click mission planner, and a full ground station. You can also do all the mission planning’s via a wireless connection.

The Walkera Scout X4 features a Walkera’s G-3D and iLook+ camera and gimbal system. This camera can give some pretty nice videos and photographs out of the box. The drone can be flown in first-person-view (FPV) due to a built-in video transmitter that provides a video feed to the Devo F12E.

The iLook+ is a dedicated video camera. It cannot be used as a standalone action camera like a GoPro Hero. Power is drawn from the battery and the image quality from the iLook+ is not as good. However, it comes pretty close to a GoPro and with the addition of a micro SD card allows the recording of video or photographs.

The Walkera Scout X4 quadcopter is also available in a GoPro kit for pilots that want a better video performance and it comes with a TX5803 5.8 GHz video transmitter. The G-3D gimbal is compatible with a GoPro Hero 3 as well with GoPro Hero 4 because the iLook+ camera was designed to have the same dimensions and buttons as a GoPro. All you need is to attach your GoPro to the G-3D gimbal and attach a video transmitter to it.

The included G-3D gimbal features a pitch control range of -130° to +90° plus a roll range of approx. 45° and the overall controller accuracy is 0.02°. It also supports stick position and rate modes. The camera can be manually moved or it can work autonomously to help keep the camera in the same direction even if wind turbulence causes the drone’s position to fluctuate.

If you want a better and heavier camera the Scout X8 kit can solve the problem. In X8 configuration, the drone is capable of doubling its capacity to about 750 grams and it had a Sony RX100 gimbal with HMI converter. This means you can carry a heavier and better camera and gimbal system as long as it is within the supported capacity.

The Walkera Scout X4 has a lot of incredible and unique features that make one of the best quadcopters to buy. Some of its features are: 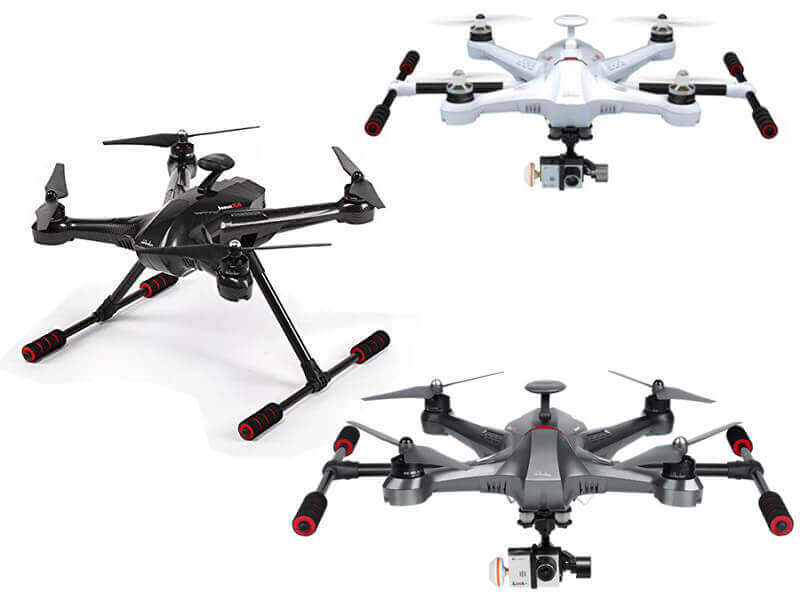 The Walkera Scout X4 quadcopter is a capable drone that can be upgraded from four rotors to eight rotors. No other quadcopter have this unique feature. This makes the Scout X4 a versatile model and a drone for photographers because they can choose a larger and heavier camera. The FPC feature is amazing for those that want photographs and videos. Also, the Walkera X4 has a long battery life, powerful motors and it’s easy to navigate it. The drone is also highly resistant.