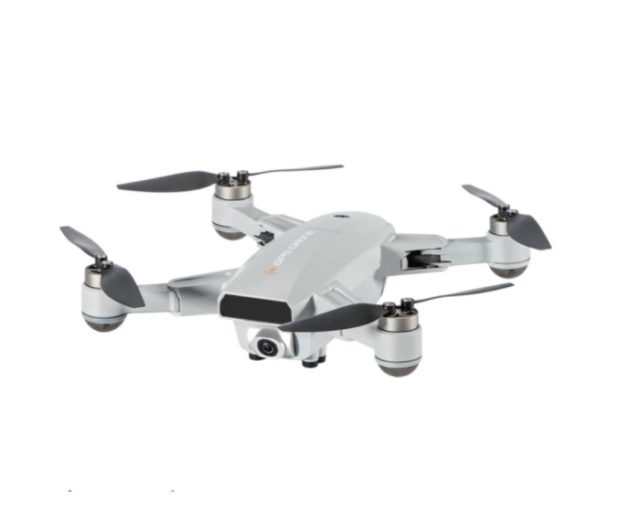 JJRC is not a new company in the marketing business. JIANJIAN TECHNOLOGY (JJRC) has been producing drones since 2009. So with 10+ years of experience, they are producing better and better drones. They made the JJRC X16 such a great drone, that it can compete even with DJI Mavic Mini. The JJRC X16 Quadcopter can capture footage in 6K and is paired with a lot of intelligent flight functions. All that for a really tempting price.

Battery (the number is depending on your order)

The outside shell of the JJRC X16 Quadcopter is made out of ABS plastic, which is a popular option. This material is useful against little collisions, but it can’t protect the inside of the drone from dust or water. Overall the drone weighs 197g, so you don’t need an FAA registration. And last but not least, the drone is built with brushless motors, which are more efficient than the brushed ones.

The remote controller is an important part of the package. If it’s done badly, it can make your experience only worse. Thankfully, this is not the situation in our case. The Controller for the JJRC is a well-built device. All the elements, like the joysticks and the buttons, are easy to reach, so the controls are seamless. The controller is powered by 3 AA cell batteries, but these are not included in the package, so you have to buy them on your own.

Also, there is a small screen in the middle of the controller, which is useful because it tells you important telemetry Infos. Unfortunately, you can’t see an FPV view on the screen, but you have an option to attach your phone to the controller, which can work as a secondary screen. And if you do that you can see the FPV as well.

The controller works with a 2.4GHz bandwidth, which is strong enough to give you a 500-meter range.

The quadcopter has a 7.6V 1450mAh battery in the package, which can give the drone around 25 minutes of flight time in optimal conditions. The battery is a modular one, so you can handle it safely when removing or inserting.

The manufacturer declares that the drone’s camera is 6K, but that’s pretty much a scam. The resolution for a photo is only 4800x2700p which is closer to 4K, and the videos are only in 1080p. However, this is still a good resolution, which is more than enough for personal usage.

The camera can be connected to your phone, which will give you an FPV (First Person View) from the camera’s angle. After you connect the camera to your phone, you can attach it to the controller which has a phone holder. The FPV range is also 500m (in optimal conditions).

The camera angle can be adjusted manually, and the lenses are set to 120 degrees.

With an included GPS the drone has a better positioning system. This not only helps you navigate it, but the other smart functions will work more efficiently.

This is an interesting function that requires your phone as well. Within the app open this feature, and you’ll see a map. On the map, you can draw your route and the drone will fly in that direction.

Just select this feature, and tap on the object you would like your drone to follow. Then the drone will follow the moving object from a 5-20 meter range

You can control the drone either by the controller, or your hands. Yes, the drone is set to recognize some gestures and react to it. The controls you can initiate with your hands are only photo and video mode. I know it’s not much, but it’s a fun way to use your drone.

You may also know this mode as orbit mode. You just select an object and the drone will fly around it in circles, this will generate a cool cinematic effect.

The drone really works fine and can fit both beginners and more experienced users. It has really nice features like almost half an hour of flight time. 500 meters of range, and a 4K capable camera. And all this is paired with a bunch of flight options.