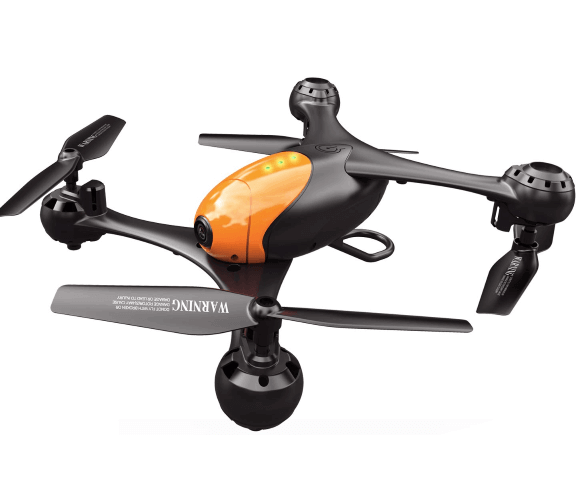 The ScharkSpark SS41 Beetle Quadcopter is a well-built drone that will give you a lot of features for a low price. So if you’re hyped to get a new drone, but you’ve waited for a cheap but professional drone, your time has come.

This is a small drone, perfect for daily usage. The drone is small, so it’s easy to carry, and as a bonus result, FAA registration is not needed. The drone is an RTF (Ready To Fly) drone, so right after you’ve got it, you just need to calibrate, and you can pilot your newest gadget. The flight experience, along with the features, won’t disappoint you.

Regarding the size, it’s a mid-sized drone. It measures 11.4 by 10.8 by 2.4 inches, with a weight of 117g, so you don’t need an FAA registration. The drone can easily fit in in your regular backpack or a drone backpack.

The design of the drone is a regular and good looking drone. It has a shell with a glossy black colour of the body and as detail an orange nose. So it looks just like a small beautiful beetle. The arms are placed in an interesting position on this drone. The first ones are under the camera, with the motors placed up, and the rear ones are above the camera level, with the motors facing down. This interesting build will give the drone a stable flight. The power button is on the top of the drone, and next to it there are some LED lights, which tells you the batteries status.

Because the drone itself is small, it can hold within only a small battery. So the ScharkSpark SS41 drone has a Li-po 1000mAh 3.7V battery, which can give you around 14-16 minutes of flight time. This isn’t the longest flight time that you can get for a single battery, but if you buy another battery you will get around 30 minutes of flight time which is a nice time, that should be considered. To charge a single battery it will take 150 minutes, so plan ahead your flights and charge your battery in time. To charge the battery use only the provided cables, it will be better for the battery.

The remote controller has a nice look and builds which fits just right in your hands. Everything is placed ergonomically, which allows you to reach every single button easily. On the controller, there is only 3 main button: 2 joysticks, and the power button. The rest are on the sides. The controller doesn’t have an LCD screen, but it has a phone holder on which you can see the First Person View from the camera. But for that, you have to use the companies dedicated app for this drone, called ScharkSpark app. The max range for the controller is 330 feet, which isn’t much, for personal use it should be enough.

The drone has a dual-camera system, which gives you 2 possibilities to catch your favourite moments. The front-facing camera can record videos in 1080P, while the secondary camera which is placed on the bottom of the drone can capture videos only in 720P. You can switch between the cameras within the app, but you can never use them both at the same time. The bottom camera is mostly for depth sensor, so it’s advised to use only the main camera if you want a better and clear image.

Both of the camera lenses of the camera have filters, which optimizes your photos and videos in bad conditions. This way you don’t have to mess with editing and such things. The company also made the cameras with an anti-shake build, so turbulence won’t affect that much your footage.

The drone doesn’t have that many features, but the ones it has are really useful and fun to use.

With this feature, you can optimize the drone to your needs. If you’re a beginner then you should start on a low tier, and as you evolve you can switch to higher gears.

This is a very important feature for people who want to take photos all by themselves. You just set the drone in a place with the altitude hold features, and the drone will recognize your face. After it’s set there are two signs you can do. You can show it your palms or a victory sign. And the drone will take a photo of you or start recording depending on the sign.

Drones get lost, all the time. But not this one. Whenever the battery will go low, or the drone goes near to it’s  It can be carried away by a burst of wind. It may also continue flying when it loses signal with the controller. However, not the ScharkSpark SS41 drone! When it loses signal, it turns to return home for landing.

The drone is a good choice to whoever wishes to get into drone piloting business. It’s a small, compact drone that is easy and fun to handle. The drone has a dual camera which is a great thing, but the most it can do is 1080p. The drone has a pretty good flight time and range, and besides that, it has some built-in features as well.

If you’re interested in buying the ScharkSpark SS41 Beetle Quadcopter you can do it on Amazon.