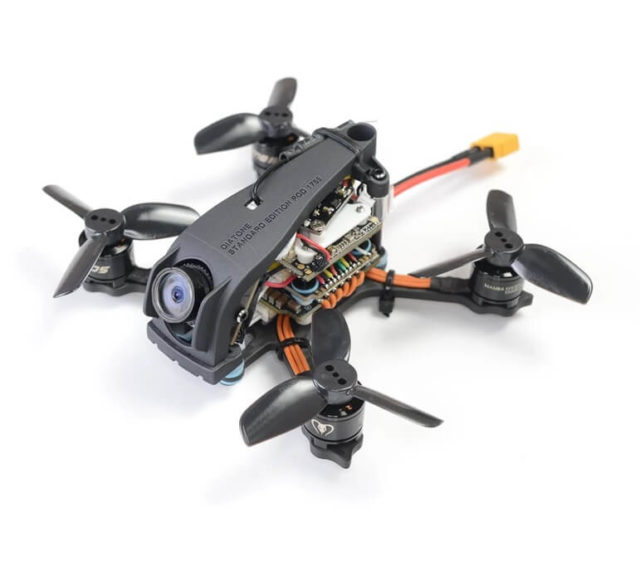 The Diatone GT R249+ Quadcopter is one of the newest series of micro quadcopters released from Diatone. The drone is built with a 115mm wheelbase and 2.5-inch propellers that come with 1105 5500kV motors, which are a perfect choice for a drone with these dimensions. Everything on the drone: the FC, ESC, and motors are all Mamba branded, except the FPV camera and VTX which came from RunCam.

The first thing that you will observe is the polished look of the drone. The build of the drone is well put together. In the package, you got you will observe some thoughtful parts like the buzzer, spare screws, cable ties, etc. However, unfortunately, only one set of propellers are included.

The canopy that keeps the whole drone together is made with an injection-molded technique. This provides a tidier finish and lighter weight as well as providing much more torsional strength. The design is not just very eye-pleasing but also very practical. It includes well-thought-out features like the camera protection molded in.

The canopy is common across all of their 2019 GT models, and you can get it in transparent, white, or black colors. In the kit you will also get 2 battery straps, they are very light, only 2g and 150mm long.

First of all, you should unlock the video transmitter which is a Runcam TX200U. By default, this is set to 25mW transmission power and many of the channels cannot be accessed. If you hold down the button for 10 seconds you can unlock the VTX. It means that you can have access to all available channels. More than that, the 200mW transmission power will be available via betaflight OSD (tramp protocol).

Next, you’ll need to add your own receiver (there non in the package). You don’t have to use telemetry because the XM+ has a great feature that sends RSSI over an auxiliary channel. So, it can be displayed in beta flight OSD (once the firmware is updated). It’s very easy to wire up with the flight controller already pre-wired.

Last, you can connect the drone to the computer and configure it on the betaflight.

On this drone, there is a Mamba 20A 4-in-1 ESC just like on the one that runs BLHeli_S firmware working over DShot conventions (max DShot 600). The burst current rating of the ESC is 25A for 5 seconds. It is likely useful for these little engines, the ESC’s do get a digit warm driving the 1105 5500kV engines. However, not all that hot to stress over it.

I would stress over how effectively a 15A ESC would deal with the draw. So, I imagine that while the maximum amp rating would most likely be adequate. I would have worries over the life span of a more modest ESC.

An incredible little incorporation on the ESC is a minuscule low ESR capacitor (25V 470uF) which assists with restricting the electrical clamor influencing the video feed and Flight Controller estimations.

I am truly dazzled with the 20x20mm Mamba F405 Flight regulator just like the Diatone GT-R239 – It has a very much idea out format with a simple to get to, great measured welding cushions.

There is a pre-fastened wire to interface the signal should you wish, and a pre-patched wire to associate with your sequential RX as well.

I referenced beforehand that the PID’s have been set in the mood for running 3S voltages. When running 4S you should change the tune to dial out some high choke swaying. Likewise, the engines do get very warm running on 4S. therefore, changing the tune to permit the engines to run cooler is energetically suggested.

Regardless of the motions, I felt right comfortable flying the Diatone GT R249+, immediately after take-off. Yes, the tune needs change yet the flight qualities motivate so much certainty that 30 seconds into my lady flight, I dropped all misrepresentation and just tore it around flying full-scale acro moves.

Another extraordinary expansion to this little FC is the 16mB of glimmer memory for discovery logging. It appears to be that, with the default settings, the glimmer memory will catch around 5 mins of flight information, (a generally similar measure of time as flying 2 packs). So, you can without much of a stretch investigate the distinction in attributes between 2 diverse tuning arrangements.

The FPV camera is attempted and tried RunCam miniature quick, with low dormancy and incredible WDR light taking care of. Unfortunately, the regulator for the FPV camera has not been incorporated. Even if, the default settings are alright for me, however, they do leave the shading somewhat cleaned out – I might want to change the settings to improve the shading that appeared in the presentation, fortunately, I have a regulator from a past buy to empower me to do this.

The VTX is important for a combo from RunCam which combines the Micro Sparrow FPV camera with RunCam’s TX-200 VTX.

The TX-200 can yield a limit of 200mW, in any case, as guidelines in numerous nations request, it is bolted to the 25mW force yield naturally. For HAM or Restricted Radio administrators and other qualified pilots, opening the more powerful yield choices and confined frequencies of the VTX is sufficiently simple, simply hold the catch on the VTX for 10 seconds.

This little VTX is intended to be connected to the rear of a miniature measured FPV camera, yet Diatone has chosen to forego utilizing this, and have planned a plate for it to be mounted inside the stack.

The TX-200 doesn’t have a computerized show so you should disentangle the LED blazing succession which advises you of which Channel, Band, and yield power you are utilizing. On the other hand, you can arrange IRC Tramp to permit the FC to control the VTX recurrence, through the OSD.

The ideal battery for the GT-R249 is a theme for some time, the center of that discussion is 3S versus 4S. Some state that the extra voltage from running a 4S pack isn’t sufficient to balance the extra weight of the additional cell.

Did I notice the quad is pre-arranged to run on 3S? Truly, many occasions I think! Ground-breaking lightweight quads, for example, this 2.5″, are commonly pretty touchy to PID changes, channel changes, and the heaviness of the battery you are utilizing.

I think the heavier pack – the more touchy to tuning changes. Thinking about this, tuning for a 450mAh 3S and a 650mAh 3S may require less PID change (assuming any) so, utilizing these various limits at 4S voltage.

With the extra cell of a 4S goes to a (generally) 33% expansion in the general load of the pack. Along these lines the distinction in weight from the extra limit of the pack is likewise 33% more prominent, potentially making 2 PID profiles a need if utilizing 2 diverse limit batteries. Because of this, I think Diatone decided to stay with a 3S tune for the default.

In conclusion, Diatone has done truly well with this little drone. The Mamba FC, ESC, and engines are an especially amazing mix. The RunCam FPV camera and the TX-200 VTX combo are attempted and tried pairs that function admirably together.

The casing is actually pleasantly completed and the additional items that are given are broad. The string storage previously applied to the screws shows astonishing tender loving care and the discretionary signal is a truly decent touch. It would be pleasant if Diatone could give some base PID’s to a 4S tune, yet we’ll simply need to deal with that for ourselves.

You can buy the Diatone GT R249+ Racing Quadcopter on Amazon and Geekbuying.