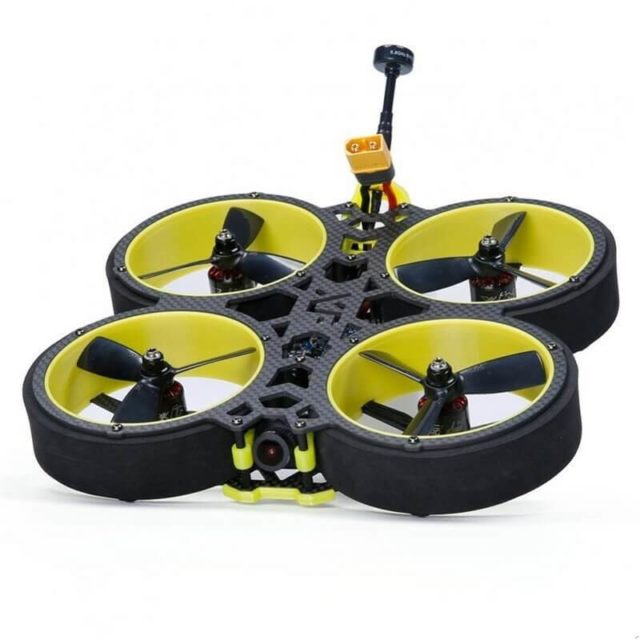 The BumbleBee is a great drone born from collaboration. iFlight and Laurent Athenol decided to work together and create the BeeBumper frame. iFlight has already made drones with a good reputation, like the iFlight DC3 HD. To be honest, the iFlight BumbleBee Cinewhoop had a lot of mixed reviews from reviewers. They say the drone is outperformed by most of the competitors while at a higher price point. Today we will find out whether or not is this true?

This cinewhoop is made specifically for angle mode with a drone on it. The drone can provide cinematic flying while flying steady and smooth. The motors on it work like a beast.

The cinewhoop comes as a BNF for analog and DJI. The analog 4S version is cheaper and will cost you around 300$. Although, the preinstalled receiver is optional, you have multiple options to choose from.

If you ever need more accessories for your quad, you can visit iFlight, to get stuff like TPU GoPro mounts and ND filters.

The iFlight BumbleBee Cinewhoop came nicely placed in its box. In the package, there were some extra sets of props, some extra screws, and a micro USB adapter. If you get the DJI version you will get a USB-C adapter since its FC and AirUnit use USB-C.

The whole quadcopter has a really nice color-match. The drone has 3d printed parts in black and yellow making it visually appealing. The frame is a unibody design, so if you break an arm you have to replace the whole drone. The design is pretty simple, just two plates connected, with standoffs to support the foam and 3d printed PLA ducts.

However, there is one bad thing about the frame. If you want to work on the quadcopter or modify anything, you will have to take off the whole top plate, which is held by 12 screws. Also, the ducts are PLA and not TPU, so after a few crashes, the PLA ducts can easily crack.

Every single iFlights product uses for their electronics the Succex-e 20×20 stack. The market is full with 20×20 F4 + BLHeli_32 ESC stacks, but the iFlights makes are probably the best. The BLHeli_32 is a great choice, it makes you able to run RPM filtering and 48KHz. And these should be your first two modifications on this quadcopter.

The VTX is connected to the antenna with an MMCX pigtail. However, The RP-SMA connector is held by a TPU mount, which is not the best idea since the TPU has flexed the vibrations, always unscrew the RP-SMA connector and make it lose. This sometimes produces noise in the video feed.

The drone comes with a Caddx Ratel which is one of the best cameras on the market right now. The camera is paired with a 2.1mm lens. The lens offer a great field of view so it is perfect for cinematic flying. The 1.6mm lens would be too wide, and too unrealistic.

iFlight regularly utilizes unibell configuration engines, and there have been instances of double/uni-chime engines around the web. Also, the engine looks equivalent to their NexGen engine that is unibell yet has an obvious mechanical production system that shows that it isn’t unibell.

iFlight has changed their engines since the BumbleBee came out and form a 1.3 version with a 1408 engine that is higher and loses its bent plan. The two adaptations offer a similar KV and ought to perform about the equivalent. The iFlight NexGen engines are truly outstanding in the business, they should be on par or shockingly better than any available at the present time.

The quadcopter on paper appears as though it should be the best. Planned by the cinewhoop ace Laurent Athenol this quadcopter should be the end-all top tier cinewhoop. There are a couple of clarifications why the quadcopter flies so awful. However, the most significant is: “this isn’t a free-form quad, yet an apparatus to catch film” when utilized in that setting, it is very acceptable its specific employment. When individuals initially get it, they begin doing flips and rolls and get disillusioned at the presentation. However, this thing is so weighty it can scarcely fly, and it should be.

To get the best presentation you should streak the freshest rendition of BLHeli_32 and Betaflight. Set the PWM Frequency to 48Khz, empower RPM separating, and incapacitate air mode. On more up to date forms of betaflight the tune isn’t a factor in-flight execution, what you need to zero in on is sifting.

Take a stab at exploring different avenues regarding separating however you shouldn’t slide right to one side since the entire edge is one major ringer resounding vibrations, sifting is truly significant on this quadcopter even with the entire stack suspended in chewy candies.

However, after the setting is applied and new props introduced the BumbleBee performs much the same as the cinewhoop it was intended to be!

In conclusion, the iFlight BumbleBee is recognized as one of the most exceedingly terrible 3″ cinewhoops being outflanked by practically all opposition while being more costly and heavier. In any case, the stage has potential, we have seen numerous records on Thingiverse with genuine channels for 3″ props that should give this quadcopter the push it urgently needs.

The fundamental inquiry is would it be a good idea for you to get it? What’s more, the appropriate response may disillusion you. Likely not, Cinewhoops are apparatuses, not toys. They can catch HD film and not tear at a field. In the event that you don’t have the time and tolerance to tame this monster, you should look somewhere else. Look at our guide on CineWhoops to see which is the best for your necessities.