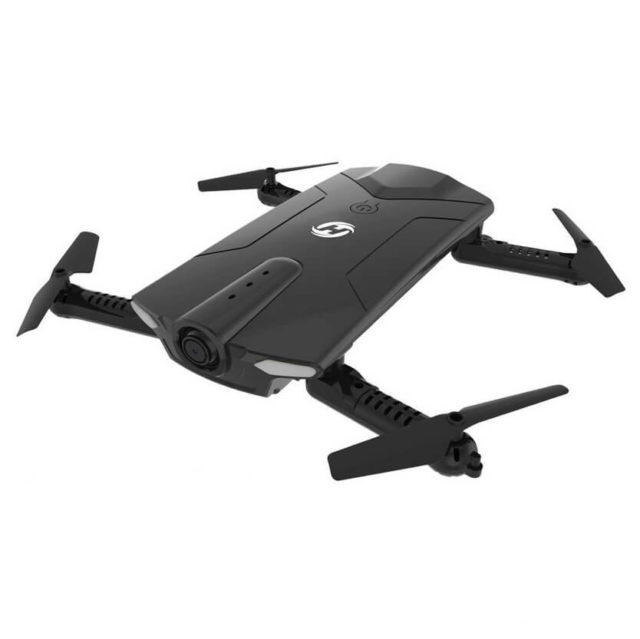 The Holy Stone HS160 quadcopter is a compact device with some relatively good video quality. This portable drone comes with a downlink for video footage. The arms are foldable and due to the slim build it’s very is easy to carry it anywhere, especially if you carry it in the provided dustproof bag.

The drone fits the best the beginners and intermediate hobbyists. Aside from the real-time downlink and the spare batteries, this drone comes with features like headless, multiple speed levels, and so on. With this drone, everyone can learn the fundamentals of aerial photography, so it’s a great way to start a new hobby. But let’s take a deeper look at the specs, so you can get an idea whether or not this drone is worth it for you.

Dust-proof bag for carrying the quadcopter

4x screws for the drone

For those who are more experienced in the drone industry, the HS160 might seem familiar. The HS160 and the Wingsland S6 has a lot of similarities in their design. Both of them feature a slim design with the camera fixed in the middle of the drone. As I said in the introduction the drone has a foldable design and a carrying case which gives you a better experience when transporting the drone.

The HS160 is made out of ABS plastic which is very light and sturdy, so it will survive minor crashes. More than that, the coating on the drone comes in red or black color. Also, other features on this drone are the LED lights next to the camera. And the LED lights under the arms give you a pleasant look.

The transmitter for the drone looks quite good and it fits just right in your hands. It has a really futuristic design and features all the important buttons that a controller might need. First of all, there is a big red button in the middle, which is the power button, you can’t miss it. And next to it there are the two throttle joysticks. Under those, there is a button for calibration, safe landing, and a light switch. On the shoulders, there are buttons for taking photos and speed modes.

The remote controller’s range is between 50 and 70 meters. And has a phone holder, which is very useful due to the fact, that the drone has an FPV feature. Also, the drone can be connected to a 3D VR headset. This is the best experience a drone can give you because you can see from the first person what the drone sees.

As for the battery, you get two of them in the package. One battery can give you 8 minutes of flight time, so in total, you will get 16 minutes of flight time. However, some environmental features like strong winds, extreme hot or cold can cut several minutes from your total flight time. The batteries are easy to change so you won’t lose much time changing them.

Light flying and not using features can save the battery life, allowing you to fly for longer. Once the battery drains out, it will need about 100 minutes for a full charge.

Holy Stone Hs160 Drone comes with a 720p camera, this is not the best you can get, but for its price range, it’s pretty good. With a camera like that, you can capture decent images and videos. Also, with the FPV navigation, you can create an even better user experience.

The camera on the HS160 is really impressive and can capture clear video footage. However, With the altitude hold enabled it will be much easier to take aerial photos. The streaming on your phone is also quite enjoyable.

If you wish to pair it with First Person View (FPV) goggles, make sure that it’s compatible with your drone. Using FPV goggles with the HS160 quadcopter can create an amazing experience. Also, you will feel like you’re in the cockpit piloting the drone. The quality is also good, but it won’t give you the same experience that a high-end drone can give you.

The flight performance of the quadcopter is surprisingly impressive considering its price range. Even though it is clear from the size of the motors that it’s not a powerful drone, it flies relatively quickly. Also, with the speed regulator and the altitude hold everyone can easily learn the basics of piloting the quadcopter.

I have an eagle pro obstacle course, could this be used as a drone racer?

Does it come with drone batteries?

Does it come with its own charging cable to charge the batteries of a drone?

Can I use it with a windows phone? specifically, Nokia Lumia?

Can you face the camera down or does it only face forward?

How long is the battery life?

Where is the SD card located?

In conclusion, the Holy Stone HS160 is a small drone created for personal use. However, it works surprisingly well. The hardware qualities like the camera, transmitter, and battery and not the best by far. But if you want a drone for an unprofessional level it might be good for you. Also, the best part about this drone is that you can get it for a relatively low price.

If you want to buy the HS160 you can get it from Amazon.