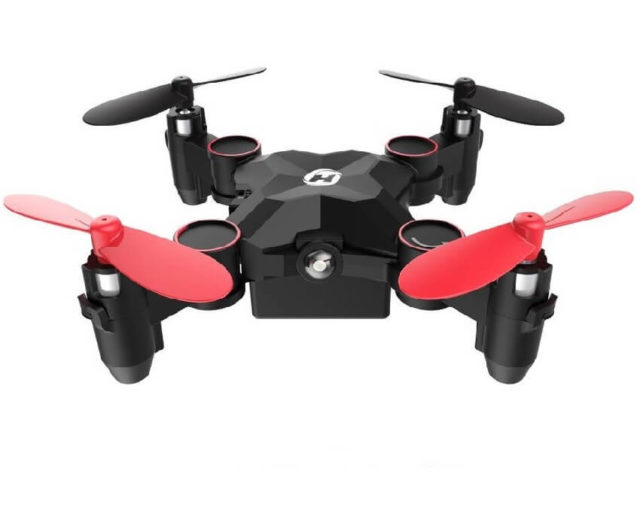 Holy Stone is best known for making great mid-sized drones for a low budget. One of their best creation is the Holy Stone HS175. But now the company wants to show their worth by making a great small drone as well. The Holy Stone HS190 Quadcopter is priced at  $29.99. It is one of their cheapest drone available. But the question here is that is it worth it for just a small drone?

First of all, the Holy Stone HS190 Drone is among the most popular small and foldable quadcopters around the world. It’s mainly designed for children and beginners, so you won’t be able to create amazing footage with it.

It may not be able to capture amazing footage, but it has the capability to rotate at 360 degrees Also because it’s child friendly, the drone is extremely safe, it has propeller guards and a low-speed function. So everyone can learn step by step the basics of the drone.

Overall it’s a small and lightweight drone, that can fit even in your pocket. Also, the size of this quadcopter also makes it possible to fly it both indoors and outdoors. But let’s take a deeper look into the specs of the drone.

When the foldable design was introduced among the drones, it was available mostly for bigger, high-end drones like the DJI Mavic Air. But with time, this technology arrived at the smaller drones as well. And thanks to that the HS190 is now available with a foldable design.

When you get the package first you’ll have to unfold the motor. Then, you will have to unfold its arm until they click. When you did that, the drone is ready for the flight. As you touch the drone you will feel how sturdy the structure is, which is kinda rare for these small drones.

The drone has a black coating on it with red details. The propellers are also red and black. The front ones are red, the red ones are black, so you can easily detect the orientation of the drone.

The drone also has a few LED lights and as such, which comes especially useful in dark environments. So it won’t be that difficult to see it at night during a flight.

When unboxing the package, you will notice that the HS190 quadcopter is stored in a huge controller. That big controller is not just a decoration, that is the remote controller itself. It is a small size drone. And it can fit inside its remote controller. This way, your drone, controller, and storage box will be at the same place all the time. you can easily take it with you wherever you want to go. The remote controller has great resistance. It is made from hard plastic. The plastic used for the drone is ABS plastic, which is strong enough and will not be easily damaged.

The controller is not that comfortable to use, due to its size. But all the commands are work really well on it. And it has a distance of 30 and 50 meters so you’ll always have to be close to the drone.

Now let’s see what’s behind the cover. After all, it’s useless to have a nice looking drone if it can’t fly. The drone is very agile and quick, however, it requires a good environment to fly to its best potential. It’s best for the drone, not to have wind outdoors. Because even the slightest wind will make controlling this drone quite challenging. The Holy Stone HS190 drone’s design is not exactly meant to create a perfect aerodynamic. It is kinda flat and square, which is not the optimal build for an aircraft.

However, this drone is even more enjoyable when it comes to flying indoors. The drone has some useful specs like the altitude hold, the headless mode, and 360 degree flips. These will make your flight sessions more enjoyable.

The Holy Stone HS190 has a really nice and enjoyable design. The drone itself fits best the childer and beginners overall. The drone is made with a lot of attention to detail. This can be noticed through the high-quality build and the creatively built remote controller that contains the drone within.

If you want to purchase buying the drone you can do it on Amazon.