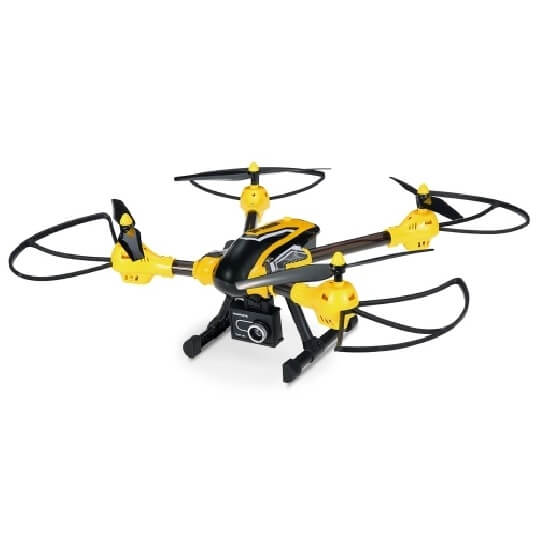 In today’s spotlight will be the Kaideng K70C Quadcopter a.ka. Sky Warrior. It has many cool features, including a remotely motorized gimbal, which is very responsive. It has a camera by default, but you can change that into any other sport camera. The camera mount is compatible with almost any other sports camera on the market GoPro Hero Series, Xiaomi, SJCam, and DJI. The arms are placed well on the quadcopter, and under each arm, there is a LED light. Due to the landing gears and propeller guards, even a beginner can learn how to fly this thing, because it will be resistant to most hits and crashes. However, the drone has some lacks as well, so before you buy it, make sure to read this review about the Kaideng K70C to know all the pros and cons.

Due to its coloring, the drone might look a bit toy-like, but it’s a serious drone with serious features. It doesn’t look as serious as a Snaptain A10 which is a bit more professional and minimalist. But you might be surprised how big this drone is, actually, it measures 55.7 x 53.8 x 17.5 cm which is quite big for a drone. If you want to transport the KAIDENG K70C Quadcopter you should get a quadcopter backpack. The quadcopter weighs around 300g, which is really not that much for a drone with these dimensions, but you should still get an FAA registration for it.

As you see, the drone has a pretty big bumper, and propeller guards as well. These do a pretty good job protecting the drone from an actual crash. But you should still be careful when flying the drone. The outside is made out of durable ABS plastic, but it can crack easily. The motors on the drone, are so strong that they can lift anything up to 500g. So when you attach a camera to it, or anything other than that, make sure it’s less than half a kilogram.

Another important aspect that you should consider on a drone, is its battery capacity and flight time. In this area the KAIDENG K70C Quadcopter is somewhere in the middle, it’s not the best, but not the worst either. The drone comes with a 7.4V 2000mah Li-po removable battery.

This amount of energy can give the K70C a flight time of 9 to 10 minutes. But this is depending on your flight style as well. The good thing is that the higher resolution of the camera won’t affect your battery life, because the two are not connected. The battery provided is a modular battery that is easy to handle, thus you can change it in no time if you have a spare battery. The 10 minutes provided can be enough or not enough depending on your preferences. The charging time for one battery is 300 minutes, and there is no option for fast charging.

The transmitter is quite bulky and looks pretty similar to a professional grade transmitter. It has a lot of buttons and switches, but most of the buttons are enabled with small icons so you should easily find out and learn the purpose of each one. Besides, there are two little LCD screens on the transmitter, one on the bottom, and the other on the top.

And for the technical details, the transmitter works with a 2.4 GHz bandwidth, as it’s shown on the transmitter, and can give the drone around 300 meters of range. This is not much either, but it should be enough. Usually, any distance more than 500 meters can be dangerous because you can’t see the drone anymore, and you’re flying “blindly”.

The camera that is provided to the drone is a 720p camera that can make stills in 2MP. Just like every sport camera, it has a wide lens, so it has a large field of view. And the gimbal has a function, that most quadcopters don’t have, the possibility to adjust the gimbal to 90 degrees.

The whole supporting system, including the camera mount, has an anti-vibration feature that completely eliminates the ‘jello effect’ on the drone’s footage. As we said earlier, the camera mount is compatible with most sports cameras like the GoPro Hero 3.

The camera mount is well placed, which means that even with a wide view, the propellers or the arms, won’t get into the shot. By placing an SD card and an SD card reader into the package, Kaideng shows us how much they care for the customer experience. Having, an SD card as your main storage is much better than saving your footage on your phone.

Like any other drone on the market, KAIDENG K70C Quadcopter has features as well that can be used with only one press. The first one is the Headless Mode. It will give you easier orientation control despite where the drone’s front is pointing at. The other one is the One-Key Return. So, whenever the drone is too far, or the battery is upon to die, just press this button, and the drone will land automatically.

However, it doesn’t have one significant feature. Due to the lack of any type of depth sensor, the drone can’t do altitude hold. This means when you want to make a still photo you have to keep your fingers on the throttles all the time.

Overall the Kaideng K70C is a pretty good model. It was built with decent flight time and flight range. Unfortunately, the specs are more suited for a beginner rather than a professional. It looks and flies pretty good, and the build is tough. The worst part of the drone however is the lack of altitude hold. That’s a feature that every drone should have. Other than that I find the drone pretty great. It’s a good thing that you can change the camera to your favorite camera. This way all your footage could have the same resolutions.
If you’re interested in buying the drone, you can do it on Gearbest.