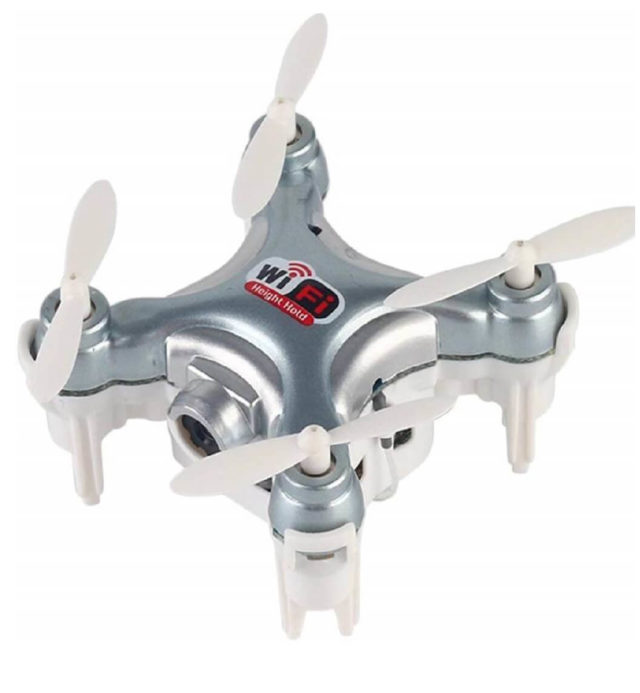 You may have seen a lot of mini drones, but there are only a few that have that many features that this little guy has. It may be the only mini drone that has altitude hold and FPV. This is a great feature because keeping the drone steady in the air it’s one of the hardest things to do for drone rookies. Also, the drone has a compact design where the drone can be placed in the controller, this way you don’t need a drone backpack to have a place where you can keep your drone.

As you unbox the Cheerson CX-10WD Mini, you will see the gigantic controller, which is the most stylish remote controller I’ve ever seen. The drone can be ordered in golden, silver, and rose-red colors. It is made out of ABS plastic, which is a light and durable material, that is often used in the drone world.

The drone itself weighs only 18g, so it’s super lightweight. The wingspread of the drone is 30 mm, so it can easily fit in the palm of your hand. The drone comes in a regular X shape, with the camera in the middle. There is a big wi-fi sticker on the top and the on-off switch on the side. As for the bottom, there is where the tiny wires can be found which serves as a wi-fi antenna. Due to the small dimensions of the drone, and weak motor, it can’t be used outside, because even the smallest wind can disorient the drone.

The Cheerson CX-10WD-TX Mini can be controlled in multiple modes. First of all, there is the classic controller, or if you prefer you can use your smartphone as well to control the drone (but I prefer the regular controller, with physical buttons). The controller has the same colors as the drone itself.

As you saw the drone is placed in the middle of the controller. The compartment is closed with a transparent door. There are many other drones that can be stored in their controller, but I believe that this drone-controller duo has the best design I’ve ever seen.

Overall the controller doesn’t fit that naturally in your hand, due to its huge size. On the controller, there are the basic two controller sticks and the shoulder buttons. With the left one, you can switch between the modes, and the right one initiates the automatic landing. The throttles also work as a button. If you press the left one, you can switch between the three-speed modes, the speed modes are switched when you hear a beep sound. if you’re a beginner make sure to start with the lowest speed. If you press the right throttle, the drone will initiate a 3D flip.

The camera on the Cheerson CX-10WD Mini is a built-in camera. Unfortunately, there is no room or enough power in the drone to hold a sport camera. The stock camera is a 0.4 MP one, that can make videos only in 720×576 pixels, so you won’t become a professional content creator with this drone. But it’s good to fool around at home. The footage recorded with the drone is stored on your phone, so there’s no need for an SD card.

The subsequent recordings are obscured with bunches of clamor and pixelation. You can have a great time with the camera, however just that. The camera’s ongoing video feed can be shown on your cell phone (cell phone/tablet) through the “CX-10WiFI” APP. This application is accessible for both well known portable OS. Likewise, you can download it for Android gadgets from here. Lamentably, the FPV has some slack and it is hard to fly the CX-10WD in completely first-individual view mode.

The CX-10WD is one of the best mini quadcopter. It has a sturdy build and features like altitude hold, which is super useful for beginners. Also, the 3-speed modes can easily help you learn the basics of drone piloting, and evolve as you learn. The drone has an FPV mode as well, but it’s not the best you can get, you will observe some lag in the stream. However, it’s a great way to start your drone experience, you can learn the basics of the control and the aerial photo/video-making process. And last but not least, it offers way more than any other mini drone, so it has a great money-value rate.

If you’re interested in buying the Cheerson CX-10WD you can do it on Amazon or Gearbest.