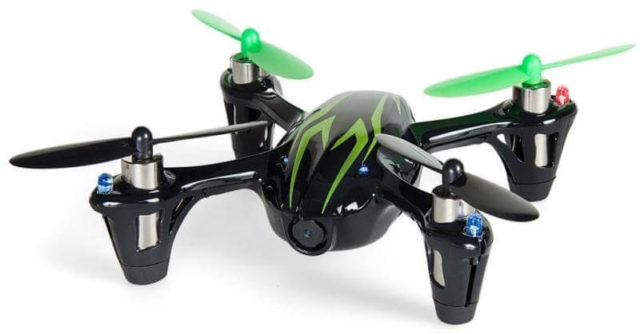 This year, Hubsan announced the release of the new Plus range of quadcopters, therefore, beginning a new line of updated models, with great features and equipment. One of them is the Hubsan X4 H107C+. Being given the fact that the X4 H107C+ range of RC quadcopters is already a success, it’s pretty clear that these new innovative versions have to reach even higher expectations.

Therefore, here are the outlines of the new model: it has a frequency of 2.4GHz, the flight time around seven minutes, and the charging time is about 40 minutes. Also, it has 2.4G technology for anti-interference, so you don’t have to worry when more quadcopters are flying in the same area. Another thing about the X4 H107C+ is that it can go in basically any direction you want: up and down, forwards and backwards, left and right turning, and left and right flying.

If you were to put this model and its predecessor, the H107C, side by side, here are the things that you would notice. First off, the new model definitely has a more tech feel to it, like it has been inspired from the looks of Imperial StormTroopers, at least aesthetically speaking. We could definitely see StarWars fans going crazy over this design.

Aside from this, you can notice LED light in both the front and rear of the drone, so you can spot it easily. Also, underneath the fuselage, there are small holes that make a grid-like pattern, for ventilation purposes. There is also a mock one on top of the fuselage. On the side of the body you can find the power button, which has a simple flap design and also blends incredibly well with the overall look. For easy access to the battery, the rear has a slide-in integrated design. On top of that, the easy access is not even that necessary considering the fact that on the side of the body is a USB port, which allows you to easily recharge the battery, without removing it.

Again, in comparison with its predecessor, the drone has an improved camera. This means a better resolution of 720P for video and 2MP for photos. One thing that hasn’t changed is the absence of any FPV video downlink. Also, something that is worth mentioning is that you will need a gimbal if you aim for well stabilized videos. Even though this isn’t a drone for filmmakers, you can have a great time playing around with this feature and you will be able to learn a couple things, before you eventually turn to a drone that has greater camera specifications.

Something you will definitely notice about the flight capabilities of this drone is its stability in the air. Even so, the altitude hold feature could definitely be improved. This is because even in the best conditions, like simple, indoor flying, there seems to be some trouble. Meaning, the drone will fluctuate in altitude within 30 centimeters, or more. There are definitely other models that perform way worse, but this is still not something to easily overlook, especially because these fluctuations grow in windy environments.

After you have learned about this, you might believe that flips are harder to perform for a drone that has this type of issues. Well, turns out this is not the case! In contrast to other toy drones on the market, this model does not plunge after every flip. This definitely means something! It is also worth mentioning that even though it has problems maintaining altitude levels in hover mode, it keeps its posture quite well when flying outside, even in an environment with light winds.

When it comes to flying modes, there are only two: Normal and Expert. The expert one makes the drone reach its highest speed possible. Also, another thing that is modified in Expert mode is the throttle sensitivity- 100%, in contrast to Normal mode, where it is 50%. Of course, you can modify these numbers yourself, to any value, if the extremities don’t particularly suit you.

Does this version have headless mode?

Does the left hand throttle stay in the down position, or spring back in center?

It stays in a down position.

Is this drone appropriate for a kid?

Yes, but you need to be aware of the blades- they can cut or sting pretty badly, if someone comes in contact with them while the drone is flying.

Does it work with FatShark goggles?

No, as the drone does not have a transmitter.

All in all, this drone is great for beginners, as you can learn slowly, step by step, not only how to fly a drone, but also how to take videos with it. After all, everybody has to start somewhere! And who knows? One day you might become an expert, and remember your first drone, which taught you all of the basics. We believe this drone is worth giving a try if you want to have some fun, especially because you can find it at a great deal on Amazon. Have a safe flight!

Eachine Novice 3 Racing Drone: Best All In One FPV Package