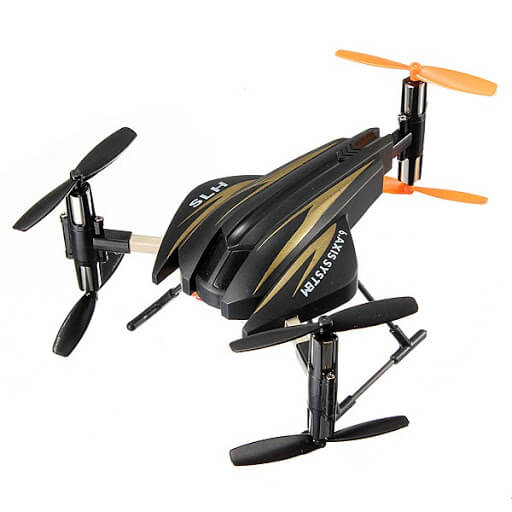 In today’s article, we will review the Scorpion S-Max 6047 which is quite a special drone. As for the dimension and the design, it might look a bit childish, but it’s a really powerful and strong drone, that requires much attention when flying. The drone is manufactured in China, and it comes without a built-in camera, and there is no place to attach a sports camera on top either. So this drone is more suitable for people who already have a drone, but also want something spectacular as their second drone for a low price.

The best part about this drone as you may have seen is the fact that it’s a tricopter, meaning it has 3 propellers, instead of the usual 4. Also, every motor is a dual motor, so it has a set of propellers both up and down, which gives the drone a stable flight.

As the name suggests SCORPION S-Max 6047 looks like a scorpion from above. It’s nothing new in the drone industry to give animal names to the drone, for example, there is the Parrot Anafi FPV Quadcopter or the JJRC X15 Dragonfly.

The structure of the Scorpion S-Max is very similar to a helicopter, but instead of two motors, it has three, which are arranged, in a triangle form. This build is called a tricopter. And one thing, to make it even more interesting and effective, each motor is a dual motor, meaning that it has a motor with a propeller both up and down, so in total it has 6 motors. The motor below is the exact copy of the one above, but this one is “pushing” the drone instead of lifting like the one above. The 6 motors are very important, because the drone is very heavy, and needs this kind of power.

The battery is placed under the drone, right under the canopy and it can’t be removed. So it’s not an option to get multiple batteries to make your flight time longer. The battery that comes with the drone has a 500 mAh capacity. This will be enough for 6 minutes of flight time. To fully charge the battery, it will require 90 minutes of charging.

The controller provided looks pretty similar to a console controller. It fits just right in your hand, and it’s very comfortable. There is an antenna on the top placed in the middle. And under that, on the front side, you will find an LCD display.

The controller works with a 2.4 GHz frequency and has 50 meters of range. So it’s, better to use it indoors. But the motors are strong enough to fly it outside as well. The controller can be powered up with AA batteries, which are not included in the package. As for the buttons, it has the main joysticks for the control and some button on the side. On the left side top buttons, you have the flip mode, which is marked as “thumbing action”.

To start SCORPION S-Max 6047, you have to plug in the battery first, then power on the transmitter and sync them. The drone has powerful motors and a 6 axis gyro, so it stays very stable in the air. Most of the drones have only a 3 gyro system, and they are pretty stable as well.

The drone is also able to make flips. Just make sure it is enough space to perform. But unfortunately, this is the only thing the drone can do. There is no altitude hold, no camera. So you should be a good pilot in order to use this drone well.

SCORPION S-Max 6047 is quite big, but it’s stable both in the air and on the ground. However, the overall build quality is not the best. The props can easily come off, and the battery can’t be removed, only if you force it. It performs really well in the air, the controller is responsive. And it has pretty good money for value ratio. But as I stated in the beginning, buy this only if you already have a drone, because this flier is quite limited.