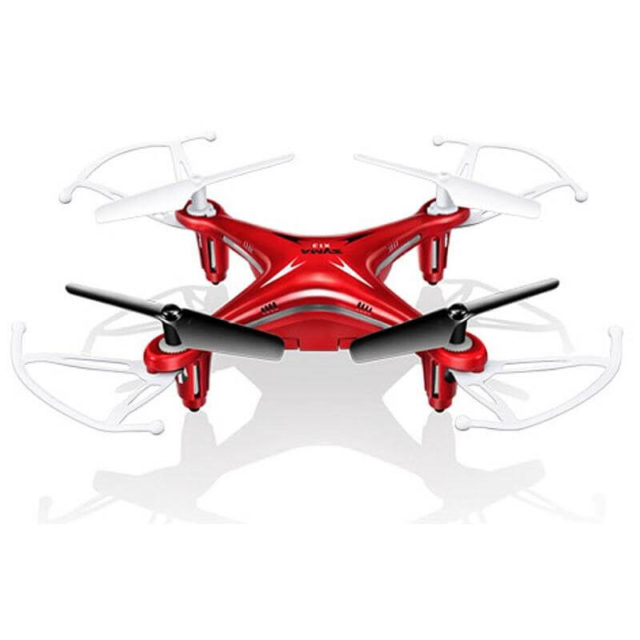 Syma is a brand that has become well-known for producing quality quadcopters that are very stable and easy to fly. Therefore, the Syma X13 Storm Drone model proves to be no exception to this tradition. One thing that stands out in its case is that, compared to other mini quads, the X13 Storm (also known as the X13 Miracle) is incredibly stable when flown indoors. Even though people generally do not trust buying cheap toys and mini quadcopters, simply because for many, the quality is questionable, this is not the case for Syma. They deliver the best quality, no matter the size.

All these being said, the Syma X13 Storm will make for a very good first quadcopter!

Some people tend to be a little surprised when they first open the box, as they wouldn’t expect the size of the drone, considering it is a mini. This might be because it comes ready to fly, so you do not have to add or screw on any extra parts. Your only responsibility is to load 4 AA batteries in the transmitter, and there you go! Also, you should know that the size is not as big as it seems, as the drone is fit for both outdoor and indoor flying. Of course, when flying outdoors, you might want to look out for any heavy wind.

Another thing that stands out just when you start flying it is the noise, which might be a bit louder than you would expect. This is because the props are engaged through the main gear, and not directly on the motor shaft. But don’t worry, the difference isn’t big.

If you have problems spotting the drone when you are flying it, 4 blue LED lights can be found in the front and the sides of it and red lights on the back. This also helps for orientation. For the same reason, the front propellers are black and the back ones are white.

In comparison with other mini quads, the X13 Storm has an enclosed battery compartment and power switch, something you wouldn’t expect for models this size. Therefore, there are no hanging wires or a partially exposed battery, which leave the X-shaped body clean and give the drone an overall ”finished look”. The only downside, in this case, is the fact that you can not fit any battery bigger than 250mAh inside the drone. Even so, you can still attach it below, with a rubber band.

The first thing you should know is that you do not need to connect the battery and manually power up the drone- you just flip the switch we mentioned above. Talk about convenience!

Even though the power of the battery is not in the high range- 200mAh , the flight time is actually rather impressive- 6 to 9 minutes. This is possible thanks to the lightweight body and small and light motors.

If this is not enough for you and you still want a bigger battery, we wouldn’t advise anything bigger than 300mAh. This is because you might end up with a sluggish drone when the battery starts running low. Also, flips are no longer possible due to the added weight.

The Syma brand has built a name on their stable and easy to fly drones, and the X13 Storm model is no exception. With a 6-axis gyroscope, it keeps the same stability when flying both indoor and outdoor, which doesn’t usually happen with mini quadcopters. Also, hovering and keeping the drone in one position is no challenge either. It is also a rather obedient drone, as you won’t wake up with it flying away and claiming independence.

The motors are not exceptionally big, therefore do not expect this drone to zip around in the air like other big models. It is not slow either, so the speed is appropriate enough for someone who just starts to learn the wonders of drone flying. Of course, you can set two flight speeds from the controller- low and high. Also, you actually have a couple benefits from this speed- it simply cannot go fast enough to crash it and end up wrecking it. Another thing that adds to this is the lightweight body, meaning the impact can not be too harsh. Therefore, it is perfect for beginners.

When it comes to flight features, nothing lacks. You can do flips in all four directions and fly in headless mode. For flips, all you have to do is press the upper right button on the transmitter and hold it down while you move the right stick in the direction you want the flip to be made.

The package of the X13 Storm drone includes:

Overall, this drone is great either for kids or beginners. The simple commands, controlled speed and great flight performance make the X13 Storm a great learner quadcopter. Also, let’s not forget that it is basically impossible to wreck, so what more could you wish for? If you already have someone in mind who would take great joy from receiving this drone (maybe yourself too), you can find it for an amazing price on Gearbest and also AliExpress, in two different versions.

Eachine Novice 3 Racing Drone: Best All In One FPV Package