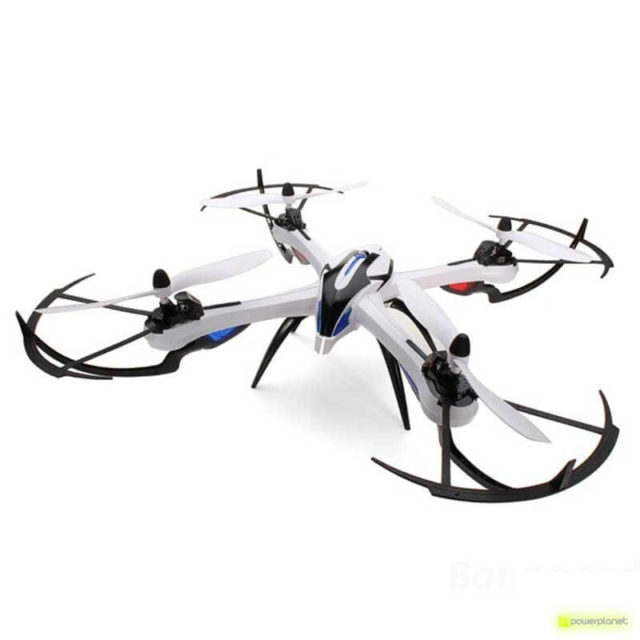 A real staple piece in the world of drones, the Tarantula X6 Quadcopter is a great gadget that stands the test of time as one of the best quadcopters made by JJRC. At a really affordable price and not to mention the incredible design that catches your eye from the first glance. But first, let’s see what recommends it.

Lets begin with what we observe first. The name of the drone isn’t just randomly picked, it is clear that the design was inspired by a tarantula, thanks to the tall and slightly arched landing skids and long arms and, most importantly, the cockpit which clearly resembles the face of a spider. The length of the skids also allow you to install a Mobius cam or even a higher capacity battery. The design also contributes to stability and durability. Because it is so big and powerful, the occasional brisk breezes won’t be a problem.

In order to make it easier for the pilot to orientate, especially in dark environments, there are also 7 LED lights, found one under each arm, two in front of the cockpit (which also double as spider eyes) and one on top of the quadcopter.

Up until now it is safe to say that it is a pretty cool drone!

Some people might see it as a downside, but others see it as a possibility to choose what fits them best: Tarantula X6 Quadcopter does not have a built-in camera. Therefore, you can pick from a wide variety: you can either get a camera from the same producer, which are either a 60 fps, 720p HD one, or a wide-angle, 30 fps, 1080p Full HD. If these don’t sit quite right with you, you can also pick a higher quality one from brands like GoPro, or Xiaomi.

The camera can be installed on the specially designed mount, that has a vibration reduction system which will guarantee stabilized, jello free videos. Also, you do not need to worry about the camera affecting the flight performance, as the powerful motors have no problem with the added weight.

Even though the first impression might be that it is not the most qualitative and durable transmitter, you might be surprised to learn that the material which is made from is actually a quite durable plastic, so you don’t need to worry about using it with gloves.

On it you can find an LCD screen that displays any important information you might need, like the speed mode, battery percentage of the controller, or the strength of the signal. Speaking of batteries, it needs 6 AA ones which don’t come with it, so you need to get them yourself.

Through the controller you can set the flight speed between 3 values: 40%, 60% and 100%. Also, on the right of the LCD screen you can find two buttons, one is for taking photos and one for recording videos, but they will only work if you have a stock camera mounted on the drone.

Because it is a sturdy quadcopter, it will perform its best even in the harshest conditions. Also, the flip modes are quite exciting, as the drone flips perfectly, even when it is only 1 meter high. If we consider speed, it is a very fast drone, which becomes even faster in Expert mode. Even so, it can be accessible for beginners, as it is easy to maneuver and has Hyper Intelligent Orientation Control, which means that losing the orientation is no longer an issue, even if the drone is 300 m far from the pilot.

Before you begin your first flight, you need to carefully install and secure the prop guards and landing skids. If you somehow happen to drop a screw inside for example, make sure that you take it out before starting up the drone, even if it means that you have to take it apart, because any metal parts can produce short circuits which will definitely take a toll on the receiver board.

The motors come with a tiny connector which proves to be incredibly helpful when or if you have to replace them. Therefore, instead of spending one hour disassembling the whole drone just to change one dead motor, the time is cut down to 5 minutes.

One thing that could be a negative is the fact that there is no on/off button on the drone or transmitter, so you need to take out the battery after every single use if you want to turn off the quadcopter. Also, if we are to talk about the modes, one that doesn’t work properly is the return to home one. If the connection with the transmitter is lost, the command will not be executed. The drone will just turn off and fall to the ground.

All in all, taking into consideration the occasional flaws, this is a good, powerful and sporty drone which fits best beginner and intermediate pilots. If you want to test it out yourself, you can find it on Amazon for far less than you would expect, especially because of the creative and futuristic design.