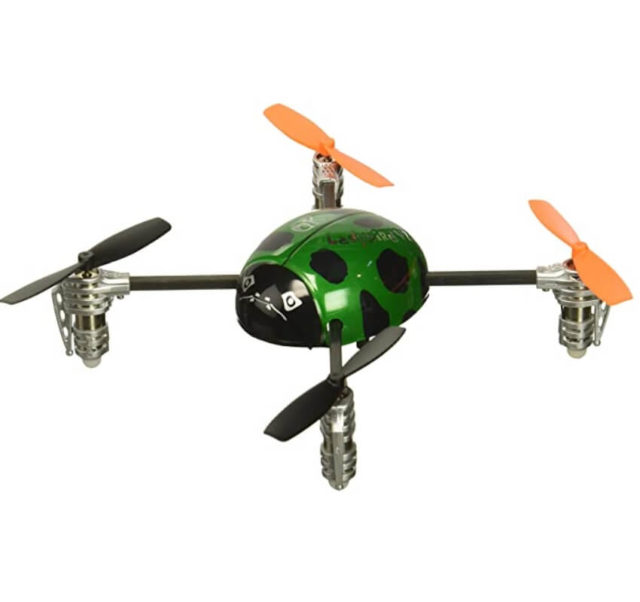 The Walkera Ladybird Quadcopter has a very suggestive name. You don’t have to think twice before noticing that he got the name thanks to its design which makes it look like a ladybird. It comes with a creative design, vivid colors, and great built quality, which offers you unexpected durability. As the name and the build suggest this drone is not the ideal filmmaker drone. Instead, it’s a good toy for the children or a nice display item for drone enthusiasts. Because, other than flying indoors, the drone can’t do much.

In the drone industry, it’s not unusual to name your drone after a flying insect. For example, the JJRC X15 Dragonfly did the same thing. But let’s talk about the built. Overall, this is a really small quadcopter, that measures only 8.5cm x 8.5cm x 3cm, which means that it easily fits in your palm. This means, that the drone needs only a small motor to fly fast. So don’t be fooled by the size, because the motor on this quad is quite powerful. Due to the small dimensions, it is quite easy to fly and even an inexperienced drone owner, can pilot it.

Another benefit to the drone is the cheap price and the fact that every part on it can be easily replaced. Even in the basic package, you get a set of 4 props, so don’t worry if you break a propeller, because there will be an extra one for you. But you shouldn’t worry, because the LadyBird is an extremely durable little drone. And even after several crashes, it will keep on flying.

The construction of the quad is quite simple. The four arms are connected to the receiver board, and there is a battery box, where you can insert the battery.

When it comes to a cheap drone, you don’t have high expectations. That’s why the controller of the Walkera LadyBird Quadcopter, will really amaze you. First of all, it allows you to monitor the speed and gyro in real-time and the battery level. Also, you can perform 3D maneuvers pirouettes, rolls, and flips with this small quad.

The 7mm brushless motors are responding immediately to the controls. So if you buy this drone, you will get it with an agile drone.

The Ladybird comes with a 3.7V 25C 240mAh LiPoly battery in the package. This amount of power is enough for 6 to 8 minutes of flight time. Most of the micro quads with similar dimensions have the same flight time, so it’s not too little nor too much. You can always get more batteries to multiply your flight time, but with this done I don’t think it’s worth it.

Walkera LadyBird Quadcopter offers two flight modes, the Stability and Stunt mode. The first permits you to utilize both high and low rates, and it will fly extremely quickly and at very steep points, without flipping. It is truly valuable for newbies to the universe of drone directing.

Then again, the Stunt mode is for those with more experience, and it permits the drone to flip. For the situation that you flew with different models from a similar class, you must have as a main priority that the V2 can accomplish flips physically, implying that pushing the drone completely over until it is even once more, is required.

The Ladybird accompanies the capacity to be controlled with the Devo RC arrangement yet has as a top priority that your regulator will require the S type.

According to the accomplished pilot surveys, to accomplish improved control of your drone, you can have a go at utilizing the Devo7E regulator, which accompanies better and less hardened control sticks. This makes the control of the V2 a lot simpler and smoother, and the actual regulator is incredibly ergonomic.

In general, this is a tiny drone, which is ideal for indoor use, yet in addition incredible with handling the breeze when flying outside. To assist you much more with your choice, we have made a short rundown of advantages and disadvantages. Here they are:

All things considered, the Walkera QR Ladybird V2 is perhaps the most ideal alternative for the individuals who need to get into the universe of Drone side interest, figure out how to turn into a drone pilot, and have a great time en route.