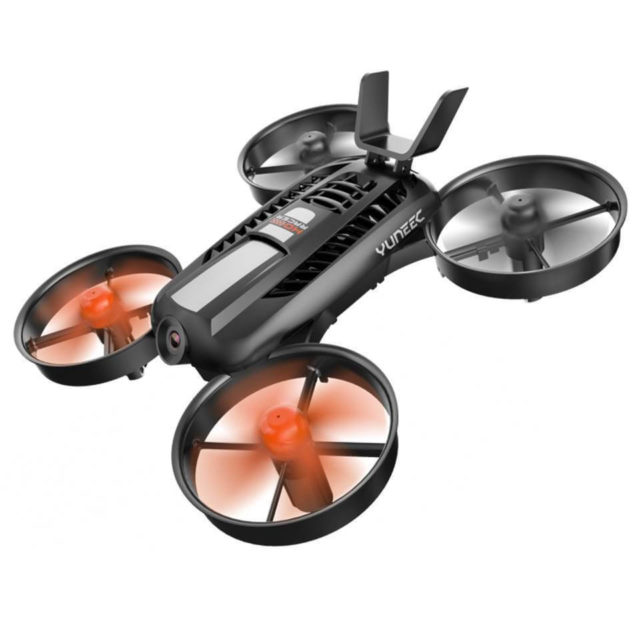 Yuneec presented some great drones so far, like the Typhoon H Pro and the Firebird FPV. But they went even further and released an HD Racer at the Consumer Electronics Show (CES) in Las Vegas in the form of the Yuneec HD Racer. This race quadrocopter is a Ready To Fly model, which will be intended to enter into the world of FPV racers.  The Yuneec HD Racer costs $179.99, but it’s stuffed with a lot of great features. But if you want to find out more, make sure to read this Yuneec HD Racer Quadcopter Review till the end.

The new Yuneec HD Racer is a sturdy drone that is a great way to enter into FPV racing for all those who do not want to deal with individual components and the complicated structure of an FPV racer. Thus, the Yuneec HD Racer is designed as an RTF racer and should allow a lot of racing fun thanks to its compact and agile size.

Other than the practical build, it has a really eye-catching design. The drone is built from ABS plastic which is durable and lightweight at the same time. For even more security, the drone comes with a propeller guard. This makes the drone even safer for itself and the environment too. Due to its small motors, the drone doesn’t behave well in windy conditions outside. On the other hand, it can be used indoors as well. The movement can be easily controlled, so you won’t cause any damage.

Due to its small size, the drone can bear only a small battery. The battery that is provided to the drone is a 1S LiPo battery. It has a capacity of 550 mAh is used to store energy. This amount of power is enough for a 6-minute flight. This depends on some conditions such as weather, flight style, and environment. The battery can be easily removed, so if you want a longer flight time, you should consider getting multiple batteries.

The package of the Yuneec HD Racer includes an ST6 remote control. It can also hold any iOS or Android device using a smartphone holder and can be expanded with a mobile app. A special feature of the Yuneec HD Racer is the integrated and ready-to-fly digital video link. It transmits the live image of the camera integrated into the quadrocopter in HD. It has a short delay time (latency) to an iOS or Android device, which acts as the display of the ST6 remote control. If desired, the live image can also be transmitted to the display of the optional FPV headset. The FPV camera of the Yuneec FPV Racer records videos in 1080p at 60 fps. It can also record in 720p at 60 frames per second.

The Racer from the Yuneec comes with different flight modes. It allows the pilot to choose between a flight condition with limited roll and pitch angles ( Angle Limit mode ) or an altitude mode with automatic maintenance of the flight altitude. In Altitude mode, the flight altitude is automatically maintained with the help of a pressure sensor. If you let go of the sticks during the flight, the HD Racer automatically stop. It also floats until it receives a new control command.

The Yuneec HD Racer Quadcopter is not a usual racing drone. First of all, it doesn’t have that nude and raw design that most of the racing quad has. But that’s not a bad feature. Other than the design it flies really well and it can keep up with its competitors.