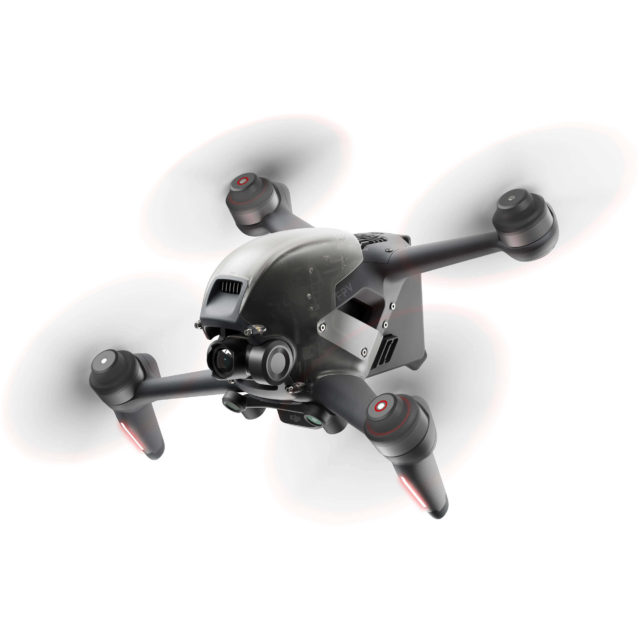 FPV drones are great. They combine the high-resolution footage of a sports camera and the agility of a racing drone. So having an FPV drone, can they open up new possibilities for creating aerial footage. However, things are not that easy as they may sound. Creating an FPV drone is a challenging domain because sometimes it requires you to build and customize your own drone. But DJI went a step further and created DJI FPV Quadcopter that requires no assembling from your part and still delivering high-quality footage.

DJI FPV Quadcopter has a very promising look, it looks really futuristic and stylish. You can get the outside shell in black or yellow colour. The propellers, arms and the lower part is finished with black colour. The drone is mostly built from plastic, instead of carbon fibre. So it’s kind of flimsy, it can break easily, especially if you fly it at a high speed. The drone is not foldable, so it’s advised to keep the drone always in a foamed carrying case.

However, when you hold it in your hand it feels quite solid, mostly because of the big battery, but we will talk about that later. Due to the big battery, the drone weighs around 795 grams, which is above 250 grams, so you’ll have to register this drone to the FAA.

One main thing why this drone is a spectacular one is due to its battery life. Most FPV drones have a Li-Po battery that lasts only 3-4 minutes of flight time, and you have to charge them for a pretty long time. But not this one. The DJI FPV drone has a huge battery, that will provide 20 minutes of flight time. This is only 10 minutes less than the popular DJI Mavic Mini 2. Of course, this means that the drone will get heavier and bigger. But every single person who’s into FPV drones will choose this option over everything else.

The second controller is a motion controller, but you have to buy that separately. It feelers pretty much like and old joystick controller that was used for games. This is very easy and intuitive to use. There is a trigger that is for acceleration. When you move it to the sides, the drone will move as well. So it’s like a video game. Especially if you use an FPV Goggle

Usually, in the case of a normal drone, the camera is always on the level, But when flying an FPV drone, the camera will tilt with the drone. This is the same with this drone as well, except that it has a DJI camera with an internal stabilizer.

Because this drone comes from DJI so you could expect a high-quality camera from the DJI FPV drone. And I can tell you that the drone will meet all your requirements. When it comes to the camera there are no jello effects, no shakiness, the propellers won’t be seen in the footage and so on. Also, the drone has a great feature, that when you press the pause it will level up himself instantly no matter his current position.

As for the resolution of the footage, the camera on the drone is a DJI sports camera with a 1/ 2.3” 12MP CMOS image sensor, which will make a pretty clear image, especially when the environment you’re filming in is bright. The FOV is 150 degrees and it has a 35mm lens. The cameras highest resolution is 4K in 60 FPS or if you prefer higher frames per second you can downgrade the resolution to get a 1080p at 240 FPV. The camera can take pictures and videos simultaneously, and you can choose between H.264 and H.265 codecs.

First of all, when you power on the drone, it will make a really cool robotic sound. Setting up and flying the drone is pretty easy. But you should be careful all the time because this is a pretty powerful drone. Because the drone weights a lot it has really powerful motors as well. You can observe this better when you launch it because then it will go in the air faster than any other drone you saw before.

DJI FPV Quadcopter is a professional drone, but even a total beginner can learn how to fly it due to its different flight modes. There are 4 flight modes on the drone. With Beginner mode your speed will be reduced to a maximum of 20mk/h, in sport mode, you can go with 75 km/h and there is a manual one, where the drone moves freely, but it won’t be able to do flips, and lastly the fully manual where you can use the drone to its full potential. In that mode, the drone can go with a max speed of 87 km/h

Another interesting thing about this drone is the fact that DJI came up with the idea of creating a simulation for the drone. This is mostly recommended for beginners, but even experienced pilots can use it, to learn how to fly properly this drone, without crashing it.

DJI FPV Quadcopter is by far the best FPV drone you can get. The drone is not the cheapest, but if you’re in the videography business, this is something that you should definitely consider buying. The quality of the parts are great, the camera resolution is awesome, the drone moves quickly. So it has everything you might need from a drone.

You can buy the DJI FPV Quadcopter from Banggood, B&H Photo Video and BestBuy.