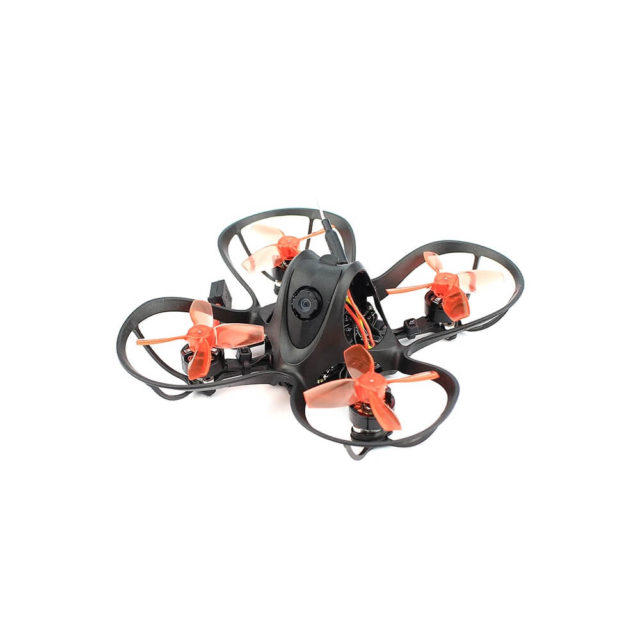 If you have been waiting for a 65mm indoor brushless whoop from Emax, we are happy to present you with their first attempt of creating one. People have many different opinions involving this model, some positive and some not so good, each depending on their own circumstances. Here, we are going to present all the specifications, facts and experiences of other users, so you can make a decision of your own. Therefore, here it is, the Emax Nanohawk Tinywhoop, a promising model.

As a brand, Emax is known to give extra attention to details and never slip in any mistakes. Therefore, in the case of the Nanohawk Tinywhoop, it has a carbon-fiber underbody and a plastic shell on top. The biggest minus is that the prop guards are also made from plastic. They do not succeed in actually protecting the propellers in a possible crash. Many people have stated that after they happened to crash the nanohawk, one or more propellers bent. Even though they tried to unbent them and it looked like the propellers were fine, they still had to deal with a lot of shaking in the camera. The silver lining though is that you get two extra sets of propellers. So they are easily replaceable. In case you run out of the extra propellers provided, not any kind will fit, just the Emax ones.

The Runcam Nano 3 camera is included and it has a resolution of 800 TVL. This isn’t definitely anything too exquisite, but considering its size, it offers something decent. Others prefer the Caddx Ant Lite, but this depends a lot on each person’s preferences and experiences. If you are new to the game we recommend first sticking with the provided camera, then if you feel like you would benefit more from another model, you can always do the swap.

Not only is it an AIO flight controller, but it also contains the 5A ESC’s, plus a D8 FrSky SPI receiver, which is integrated. On top of the controller, you can find the VTX mounted, which is capable of transmitting 25mW, a good value for the size of the drone. Something you should know is that the band and channel settings can be modified through Betaflight OSD via SmartAudio. All in all, it is a flexible controller that will do its job without letting any room for disappointment.

The battery included in the package comes with a GNB27 connector and a six port USB charger. The latter has PH2.0 connectors and two pigtails to connect the GNB27 batteries. Indoors, the battery will provide you with a flight time of around 2:30-3 minutes, but outdoors, the story changes up a little. Meaning, the battery will run out in approximately 1 minute. On the other hand, if you switch to the 450mAh batteries, they tend to perform better. It will reach 4 minutes indoors and 2 minutes outdoors, which are the best values you could possibly get. If you still consider that you might benefit from a much higher capacity, we do not exactly advise you to do so. The quad might not be able to function properly if you put too much power in the battery.

Overall, the performance is good, but it seems like this drone is not exactly fit for flying indoors, contrary to its advertisement. This is simply because of the disadvantage we mentioned in the beginning- the high possibility of bending the propellers. In an indoor environment, it is much more likely to crash than in an outdoor one, so this is where the issue appears.

Flying it outdoors on the other hand, seems to be actually a good option. You can even zip around and do some acrobatics, so you have a guaranteed fun time. Also, you do not need to worry so much about possible crashes, and your propellers are more likely to have a longer lifespan.

Finally, this is not, by any chance, a bad Emax product. The main issue here sits in the way the product is advertised. In these conditions, it is not by any wonders that some buyers end up disappointed. Because it is claimed that it is a beginner indoor drone, it definitely ends up confusing some people. Therefore producing a couple bad reviews. Considering the fragile propellers and prop guards, the model is more likely to have a longer lifespan.

Especially if you fly it outdoors, where you can actually have a bit of fun with it and not worry so much about the obstacles. Also, because when you are or might be a beginner, crashes are more likely to occur in a difficult environment. So you might end up spending more time repairing and replacing propellers than actually learning how to fly this drone.

Of course, the best advice we can give in the end is that you should get this drone from Amazon. It is better to see for yourself who is right and who is wrong in this debate. It is no denying that you will have a great time with it either way. Especially if you are even just a little bit familiar with flying. All is left to say is, enjoy!