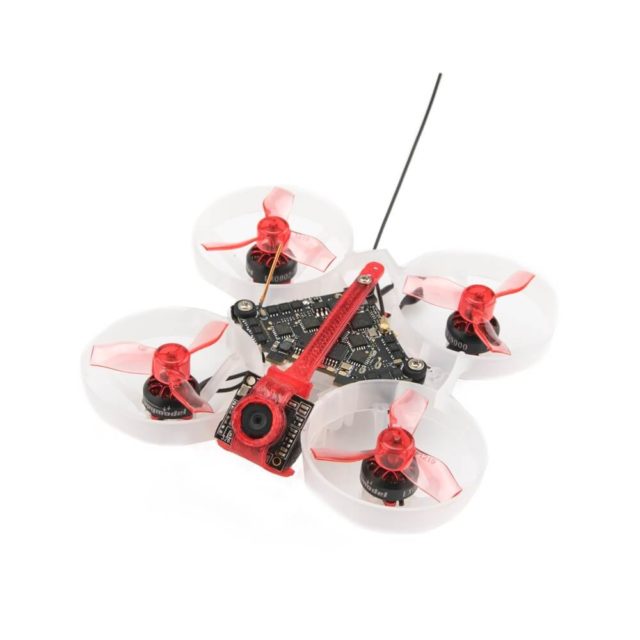 A new model has recently been released on the drone market, and fans could not be more excited. We are talking about the Happymodel Moblite6 Tinywhoop. It claims to be a new, fresh version of the already popular Mobula6. Even so, its competitor is also its brother, if we may call it this way. The also insanely appreciated Moblite7. These are both great models, but the Moblite6 version tends to get a little more love. We were as curious as you are right now to find out why, so we did a little research. After going through this article, it is up to you to decide whether this new release deserves all the attention it receives.

One definite thing about the Moblite6 is that it is far more agile than its competitors, the Moblite7, or the Mobula6, simply because it is much lighter. This is possible mostly thanks to its skeleton design, which is able to meet both the beauty and functionality criteria. Even so, this advantage comes with a few other disadvantages. The only thing that somewhat keeps together and supposedly protects the flight controller is a small TPU strap, which also serves as a camera holder. This being said, many people felt like this is too much to ask from a simple piece of plastic. In addition, others noticed that the camera is not held tight enough, so an extra screw is needed. Other recommendations include also rerouting the long antenna, so it does not end up getting caught in the propellers, therefore compromising them. These are all small issues that, thankfully, all have an easy fix. Therefore, as long as you are aware and take care of them, there should be no issues.

The team at Happymodel decided to use a RunCam Nano4 Lite. It is certainly an interesting choice, because while it has only 18.5 grams, it also has a 1/3″ CMOS sensor, and a horizontal resolution of 800TVL. The lens has a FOV of 160 degrees, while the signal system is PAL/NTSC, non switchable. The image quality definitely won’t be something you have never seen before, but it might be just enough if you want this Tinywhoop for just a little fun, and don’t plan to film a documentary.

They connect via a standard PH 2.0 connector. It is true that compared to the Moblite7, which gives you up to 10 minutes of flight time, the Moblite6 falls behind with just 4 to 5 minutes, so, half the time. In this case, it is really a decision based on preferences only. If you would rather have some more flight time, go with the Moblite7, but if simply good handling is not enough for you and your standards are much higher in this department, then the Moblite6 will be your best friend and partner in crime.

The motors that this drone comes with are brushless, and also a new model, the Unibell 0802, 19000KV ones. They have a configuration of 9N12P, with a stator diameter of 8mm and a stator length of 2mm. They have only one 1S LiPo cell, and a weight of 1.7gr. We would say that these specifications put these motors in a middle group, so you can not expect a sky-tearing speed, but we also promise you you will not be left disappointed.

The controller used in this case is called Happymodel DiamondF4, and it has a built-in SPI Frsky receiver and a switchable 25-200mW VTX. The receiver has an IPEX antenna connector and a normal dipole antenna. Of course, as we mentioned in the beginning, this part of the Tinywhoop is extremely fragile, especially because it has only a TPU strap to protect it and hold it together. Therefore, you will need to be extra careful if you want to keep the controller in just one piece, so make sure that you avoid flying this Tinywhoop in an area where many obstacles are involved, and also the risk of crashing is higher.

At a final glance, the Moblite6 is not necessarily a Tinywhoop made for beginners, especially because of its fragility to any possible crashes, no matter if they are light or hard. Of course, it is made for indoor flying after all, so with just a bit of experience you should not have any issues with it, considering it has a good controller and mechanism overall. If you have not yet been convinced and still want to see for yourself why the Moblite6 is the favourite child in the Happymodel family, then you can head up to Amazon and get it yourself, with the controller of your choice. We are definitely looking forward to your experience!