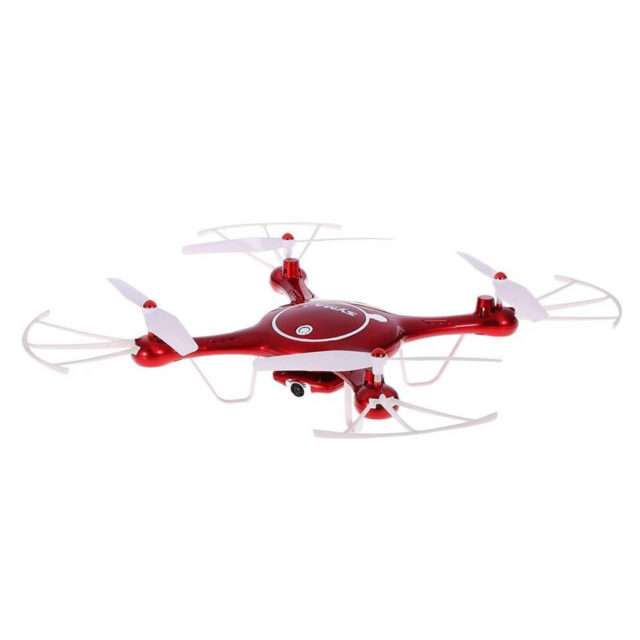 It is already well known that the Chinese manufacturer offer a wide variety of models that become well recommended quite quickly, as they are also a good fit for beginners. Therefore, our review today is of the Syma X5UW Quadcopter, a model that stays within the standards Syma has already accustomed us with.

This time, Syma has outdone itself in terms of design, for both the Syma X5UW Quadcopter and the remote controller and we can say that it was a successful attempt. The flatness of the quadcopter contributes to aerodynamics, therefore allowing a longer flight time. The low-profile landing gears provide better stability than the ones before, in case you would be in the situation of a hard landing.

Even though some people consider the shiny red plastic a bit on the girly side, we would say that it is actually an advantage, mostly because the drone becomes more visible both in the sky and on the ground. Also, thanks to the material that makes it lightweight, but also strong, the model becomes resistant to corrosion and water. The main gears are protected from excessive dust, hair strands, grass, or other such things due to the fact that they are enclosed in the mainframe. The propeller guards can be easily attached to the aircraft thanks to the clip-on system, so you will not need any screws.

If you plan on flying during nighttime, the 5 LED lights have got your back. You can find red ones on the front and green ones on the back, one under each arm, and one on top of the aircraft.

The remote controller is as stylish as the drone, mainly white, with red details. Even though it does not have a LCD screen, or too many buttons, it is definitely user-friendly. On the front panel, besides the two usual control sticks, the right hand one that controls the distance and the left hand one that controls speed,  the only command you can find is the power switch. The rest of the four buttons are found on the shoulder of the remote, two on each side. The left-frontal one allows you to start or stop the video recording, while the left-rear one takes photos. Moving forward, the right-rear one engages the automatic take-off and landing, by short pressing it. Also, you can switch between the two flight speed rates by short pressing the right control stick. One beep means the ”Low” setting has been activated, while two beeps indicate ”High”.

Syma X5UW Quadcopter can be controlled in three different ways: through the remote controller, virtual sticks, or the smartphone. As fun as it may be to control it by tilting the phone, we would advise beginners to use the remote controller first, in order to get used to the controls and the flying style.

Once you gain a bit of experience, you can freely start using your smartphone and the Syma GO app, for both Android and iOS. It makes it easier to monitor the camera and control the drone, while also offering the chance to draw a route on the map for the drone to follow, also known as Way Point Mode.

If it might happen that the drone starts flying abnormally, the recalibration of the gyro can be done by pushing both sticks to the lowest right position.

The camera does not come attached to the body of the drone, so it has to be mounted on the belly. Even so, there are no visible wires or antennas, but the angles of the lens can not be modified in any way.

The good news is, it has a micro SD slot which is already loaded with a 4GB memory card. Therefore, the recorded videos can be directly stored on it, without having to use your smartphone for this. Also, you can expect better image quality, simply because the material, both photo and video, is not saved from the live-video feed, something that frequently happens in the case of other WiFi FPV cameras. When using the Syma GO app we mentioned earlier, it will be stored both in the smartphone’s and camera’s memory.

The resolution is 1280 x 720 pixels, but a noticeable downside is that the video frame rate is less than 25 FPS, and the colors are less saturated, in contrast to other WiFi cameras. The good part though, is that it offers better sharpness.

To put it simply, the motors are very powerful. They can be armed in two ways: either by pushing up and down the left throttle stick, or by moving both of them to the lowest inner position. The drone can reach a vertical height of 40-50 meters and an horizontal range of 80-100 meters. Also, the built-in six-axis gyroscope makes it very sensitive to the user’s commands.

The speed can be controlled through the available ranges, high and low. For beginners, the best option would be to start with the low setting, which is also great for indoor flying. Then, after some practice, advancing to the high one, as this one is more agile and responsive, while also improving wind resistance.

How far away can you fly with the WiFi mode, outside?

We would suggest 10 meters, as a longer distance might cause losing control of the drone because of poor phone WiFi signal.

What would happen if the drone would go out of range?

What sizes can the phone fixed mount hold?

Is this drone rechargeable?

Yes. The batteries are removable and rechargeable.

What is the largest MicroSD card I can use?

The only card you can use is a 32GB one.

What age is this drone for?

This drone is for ages 12 and up and adult supervision is required.

The package of the Syma X5UW includes:

Overall, Syma X5UW Quadcopter is a good toy drone that is suitable both for beginners and more experienced users. It can also pose as an impressive gift, while also not drying you out of resources. You can find it either on Amazon, in two available versions, or on GearBest, for a very reasonable price. Even if you buy this for yourself or someone dear, the happy owner will be pleasantly surprised by the beautiful design and powerful performance. Happy and safe flying!