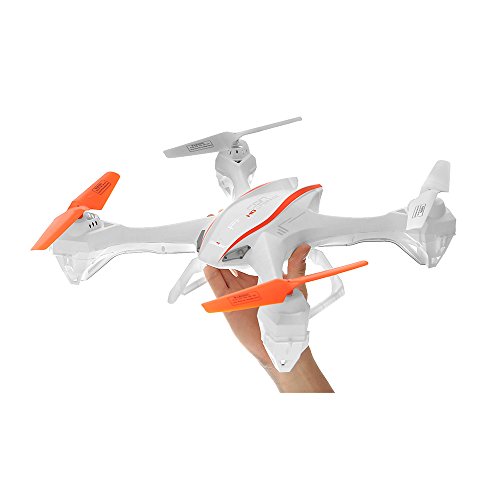 Either you are a beginner, or a more experienced pilot, we recommend looking into the UDI u842 Falcon Quadcopter. It is an affordable, but also reliable and sturdy drone that is ready to fly out of the box and has just enough functions to be both helpful for novices and fun for pros. If you are curious about the more detailed specifications of it, you can find them below.

The 3.7V 1000mAh LiPo battery is rechargeable through an USB cable, which means that this allows you to fly as many times as you would like, without having to buy a new battery each time. Depending on your flight style, it can last between 7 to 9 minutes with a range of approximately 30 meters.

Or at least this is what UDI claims about their drone. When you actually lift it up in the air, things are a little bit different. On the bright side, the flight range appears to be bigger, even up to 100 meters. The disadvantages lay in the specs of the battery, as it is not as good it should be. The flight time is actually somewhere around 5 minutes, with a low battery warning as soon as 30 seconds into flight. Overall, not that great. The good news are that the batteries needed for the UDI u842 Falcon are widely available, so you could just as well buy a couple more and switch them when they run out. This way, you might get a longer flight time without having to wait for the battery to charge.

The UDI u842 Falcon can do more than just perform stunts during flight. It can also record aerial videos and shoot amazing pictures. All of this thanks to the incorporated HD camera, that comes with a resolution of 1280 x 720. Even more, the pictures are captured at a rate of up to 30 frames per second. The only slight downside is that the colors in the videos are a little bit faded. With this considered, this camera is still quite amazing for the price range, with a quality many might not expect. An important note is also that if you wish to mount a GoPro camera, this is not exactly an easy thing to do.

An overall impression is that the UDI u842 Falcon flies well. The 6-axis flight control system allows you to record smooth video footage by ensuring perfect stability during flight. Even though this is a larger model, many pilots have claimed that it has better stability than some smaller ones. To control this drone, you have a 2.4Ghz remote transmitter which can operate with four different channels. This makes it possible for you to perform stunts and set up the drone according to your experience level.

The stunts we just mentioned are so easy that they can be done at just a push of a button. Therefore, we need to mention 3D flying, a mode that makes the drone perform complete rolls and flips. Also, there is a 3D mode available that allows for more manoeuvres to be performed, and consequently improving the fun and overall flying experience.

In addition, you can choose between two different flight modes: beginner and intermediate.

In the beginner one, the UDI u842 Falcon will not react as quickly to the commands and it will maintain its stability in the air. Therefore, it makes it easier for beginners to get used to the controls and how sensitive they are. One disadvantage is that if you happen to fly in a windy environment, you might find the quadcopter a little bit harder to control.

In the intermediate mode, the drone begins to be more faster and maneuverable, as it is more receptive to the commands.

Is the camera adjustable, or fixed?

The camera is fixed on the body of the drone. Therefore, it can not be turned upward, or downward, but the drone can move up, down, forwards, backwards, and it can even turn around.

What is the flight time?

As we mentioned before, it can vary. If you are recording and have the lights on, for example, you have between 7 and 9 minutes. Otherwise, if you simply fly, you can enjoy up to 10 minutes.

Can you watch the recordings in real time?

No, you can record on a SD card and watch the footage on a computer afterwards.

The package of the UDI u842 Falcon includes:

Overall, this model is designed with stability and ease of use in mind. The flight modes make it easy for any beginner to learn how to fly while also making it easy for an experienced pilot to have fun. Not to forget the photo and video abilities that it has, which can be a great way to record memories. If you believe the UDI u842 Falcon is the right fit for you, or maybe an amazing gift for someone else, you can find it at a great price on Amazon. Do not forget to let us know about your experience with it!