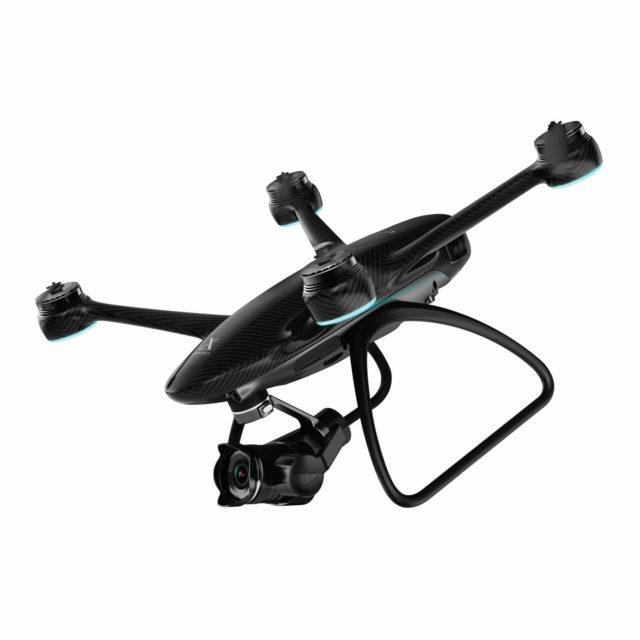 When you look at the specifications, XDynamics Evolve 2 Quadcopter has packaging – micro 4/3 sensor with interchangeable lenses, 4K / 120 fps and Pro-Res, a flight time of 33 minutes and a range of 11 km. Drone pilots have been waiting a long time for a drone to stand between Mavic 2 Pro and Inspire 2 / X5S and XDynamics Evolve 2 could be just that. Let’s take a closer look at the features that make this drone such an excellent choice for pilots looking for a cheaper and smaller alternative to Inspire 2.

Since this is an aerial photography platform, let’s start with the camera. On the bottom, the Evolve 2 carries the new Astra MFT camera, which is equipped with a Sony micro 4/3 sensor. This is actually the same sensor size as the popular Panasonic GH5, as well as the DJI X5S camera.

The Astra MFT can record 4K videos at up to 120 fps with a maximum bitrate of 100 Mbps and, unlike prosumer drones, can record to both micro SD and CFast 2.0 memory cards using H.264 / H.265 video encoding and Apple ProRes. While the Astra MFT lags behind the DJI X5S resolution (the X5S has a 20.8MP sensor and can record up to 5.2K), it has a 25% higher dynamic range and can record at a higher frame rate in 4K resolution.

The design of the Evolve 2 is a much more elegant version of the original Evolve, while still retaining its Phantom-esque design. The integrated body/chassis is made of a single sheet of carbon fibre which, despite its lightness, has a tensile strength over 50 times higher than plastic. Due to this fact, the Evolve 2 weighs just only 4.34 lbs (with props, battery and camera) and, as a result, is able to reach a flight time of up to 33 minutes.

Unfortunately, some of these weight reductions may have come at the expense of additional hardware: the Evolve 2 has no obstacle avoidance sensors in any direction, although it does have LiDAR facing down and optical flow for accurate landings.

In every corner of the Evolve 2’s carbon fibre frame is a 530Kv brushless motor – generating 1.7kg of propulsion each – allowing the quadcopter to reach a top speed of 57 mph (only 1 mph from the top speed of Inspire model 2). With so much tap power, a reliable connection is a must; the new ground station controller has a range of 2.5 miles (4 km) but can reach up to 6.8 miles (11 km) with the two removable antennas installed. And rather than requiring the use of a smartphone or tablet, XDynamics designed the ground station with two built-in touch screens – a large 8 ″ screen and a 5.5-second secondary control panel. Internal ground station control is powered by a 1.8 GHz ARM processor and GPU.

Priced at $ 3699, the Evolve 2 is more than double the price of DJI’s Mavic 2 Pro, but $ 2,000 less than the Inspire 2 / X5S combination. This puts it in a good position for drone pilots who want to upgrade from Mavic 2 without sacrificing all portability or paying over $ 5,000.

Many people hoped that DJI would launch a Phantom 5 with interchangeable lenses that could fill this gap in its drone offerings, but with the officially dead Phantom line, XDynamics Evolve 2 will probably fill this gap. The XDynamics Evolve 2 drone is available for pre-order now with a $ 50 refundable deposit. Thus, if you are thinking of purchasing one, we recommend you go to xdynamics.com. Delivery is expected to begin in April this year.

This drone is the brand new, much more improved Evolve model, Xdynamics, went to the drawing board and redesigned and produced a completely new version of the drone, taking into account all the before complaints and customer feedback. The body line of this drone has been completely thinned and they have even reduced the size of the landing gear.

One of the biggest complaints about this drone from customers was that you couldn’t take it on the plane, you should check it or try to cram it into the overhead compartment. So they went ahead and weakened that. dynamics has also reduced the thickness of the arms. The new drone has a metal radiator at the bottom, along with obstacle avoidance and an incredible range of 11 kilometres.

How is that possible, you ask?

Well, the controller on the Evolve 2 will be similar to the power of many new drones that will come out – in other words, you will have a range of 6 kilometres. But with Evolve 2 you can attach additional external antennas to the back of the controller. If you put high gain antennas, you will get 11-12 km of autonomy.

They have also made improvements to the controller which now has a touch display on the front, its dual touch screens have thousands of nits of brightness and twelve kilometres of autonomy. The battery life is 40 minutes long on this drone model, which is impressive. Evolve 2 is also quieter, as one of the biggest complaints of their Model 1 was that it was frustratingly noisy.

The camera is almost professional – 4k 120 fps with a 4/3 inch sensor with a detachable lens. This will make it the lightest drone carrying a 4/3 inch camera, as other drones with a similar camera are much larger and heavier professional models. The camera is also removable at the touch of a button. More so, the drone weighs about 1.9 kg.

The XDynamics Evolve 2 drone offers a carbon fibre fuselage and propeller arms with a magnesium undercarriage, plenty of power and flight time, and a four-thirds micro camera. The payload makes the purpose of this cool drone very clear, this is a high-end camera drone.

The original Evolve drone was a good cornerstone for the company, but now that they’ve learned how the market works, we’re glad to see the huge leap from a 1 / 2.3-inch camera to a 4/3 microsystem. The camera we use to record our videos, Panasonic GH5, has the same sensor size and costs almost the same price as the Evolve 2 with lenses. We had high hopes for a drone model with a camera of this calibre and we look forward to putting some of our goals on this drone. Let’s not forget that XDynamics Evolve 2  Quadcopter also offers a crazy connection radius, with connectivity over 6 miles. Laws make it difficult to use this in the United States, but derogations may be provided and other countries may take advantage of this