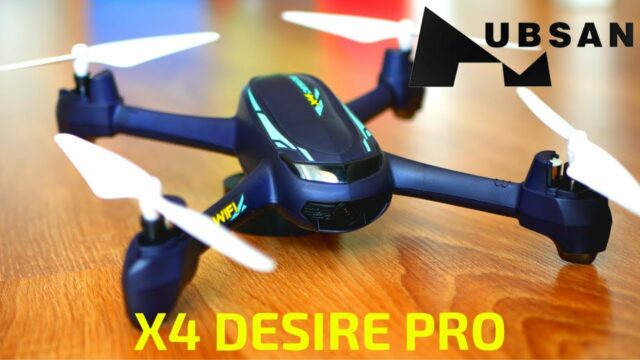 As soon as you unpack your  Hubsan X4 H216A Pro Quadcopter, you will be able to tell that it is an amazing drone for its price range. You might have heard about it under the name of Desire Pro, a great tool for aerial photography, and much more! It is also a good option for both beginners and experienced pilots, so no one gets left behind. If you want to learn more about it, follow through with our article and decide whether this will be your next acquisition or not!

Hubsan seems to know a thing or two about the first impression, because the packaging of the X4 H216A Pro alone is simply impressing. The drone comes in a protective laminated cardboard box that features pictures and details about the drone. Usually, this type of packaging is only available when purchasing from a store, but in this case it looks like online shopping is valued too.

The drone has a solid and high-quality feel, even though it is made out of plastic. It leaves the impression that it could handle a hard landing or occasional knock-out, without too much damage. Alongside the sleek design, there are also LED lights that make it easier to spot the drone.

It is a ready to fly model, with pre-fitted propellers, so all you need to do before your first flight is to charge the battery and download the required app. It is really easy to charge the drone, as you only need to plug the battery into the charger, and then the charger into a standard USB port. The only downside is that the charger has a slowly flashing red light that does not really give you any information of when the charging is complete. Other than this, there are no other disadvantages regarding the design of the X4 H216A Pro.

Even though the WiFi FPV camera is able to videotape in 1080p HD quality, the results are not exactly commercially worthy. This is because it does not feature a mechanical gimbal. Therefore, it is placed in a fixed position, unable to rotate or compensate for the wind. Also, the angles can end up being quite awkward, and it might not be suitable for professionals.

Other than that, the image quality is impressive in ideal conditions, especially considering the price range. Also, the experience is unforgettable thanks to the ability to view real-time video streaming on your phone. The bird’s-eye view can be a thrilling feature for beginners, as the drone can automatically travel along a waypoint path.

The X4 H216A Pro is quite unique in this department. Usually, you would find that your smartphone can be an optional method, rather than the controller. In this case, the phone can be directly connected to the drone through WiFi, and then the controller can connect to the phone via Bluetooth. This way, a direct drone-phone connection is made, meaning you can leave your controller at home. This comes with a number of advantages: one less bulky thing to bring and worry about, no more desperate battery searches, and space-saving.

The downside is that due to the WiFi connection, the flight range will be limited, in comparison to a 2.4GHz connectivity. Even so, because the X4 H216A Pro is such a small model, you would not really be looking after a long flight range. This is because it becomes very possible to lose the drone out of sight. On the other hand, if you really feel like you need something more, a WiFi repeater/amplifier will add up to 300 meters, which should be more than enough.

As for the flying experience, there is not much we can complain about. Thanks to the incorporated GPS and flight functions, the X4 H216A Pro is really easy to use. This makes it a perfect fit for beginners and commercial users, who want to learn all about drone flying before investing too much money. Some have reported that it seems to fly quite sluggishly, but it is only noticeable if you have experience with more advanced flying power.

A fun feature that makes the drone directly fly to a on-screen, pre-selected destination right after take off. Therefore, it is easy to control the X4 H216A Pro, which gives you more time to relax and enjoy the experience, especially the camera features.

With just a press of a button, the X4 H216A Pro will rise up in the air. By pairing this with the waypoint function, you can witness a completely automatic flight plan.

The X4 H216A Pro features a superior and precise hover capability, thanks to its streamlined body, the two powerful engines and advanced flight control system.

One of the most confusing things as a beginner can be figuring out the direction of the drone. With the headless mode, you will not need to worry about this anymore, as the drone will take into consideration your commands only, ignoring its own orientation.

If the connection between the drone and the controller is lost, or the batteries are running low, the drone will automatically return to its last take off point. Therefore preventing any crashes, or even losing the X4 H216A Pro.

Are the photos and videos taken saved on the phone or the SD card?

They are saved on the SD card.

Does this model work with VR goggles?

What is the control range?

Do you have to re-calibrate the X4 H216A Pro each time before flight?

Overall, the X4 H216A Pro is a model thought for high-quality flying for both beginners and more experienced pilots. Considering the high number of features included, the price range is something to be amazed by, and in a good way. If you want to test this model out yourself, you can find it on Amazon for a great deal.