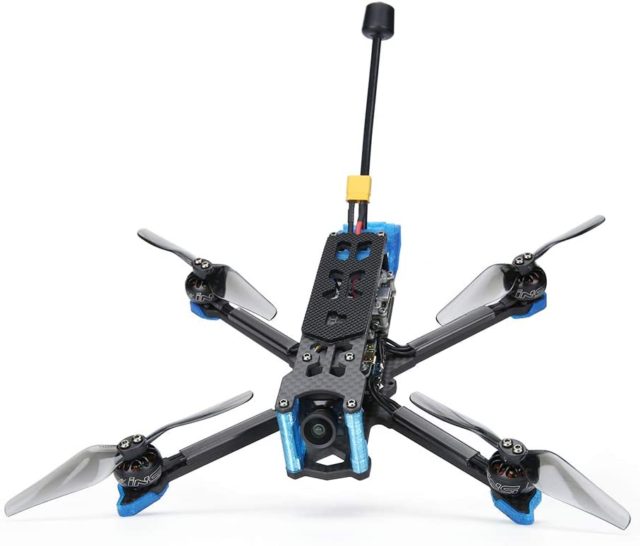 After the iFlight Alpha A75, here is the iFlight Chimera4 FPV Quadcopter. The iFlight manufacturer did not intend to let the 4-inch micro-racing wave pass. The Chimera4 4S LR version is equipped with a Vista box and a Nebula Nano Caddx camera, for digital video feedback compatible with FPV headphones and DJI remote control.

The drone comes in a classic X-shaped structure, with a 4 mm thick carbon bottom plate, including the arms, and a 2 mm thick top plate. Six 2.8 cm spacers connect the two plates. The motors are brushless Xing 1404 3800KV – this is the “Speed ​​Cruiser” version, as opposed to the “Cruiser” version equipped with 3000KV motors. The aircraft comes with two sets of propellers: Gemfan 4024 and Nazgul T4030. The direction of rotation is “props out”, ie the direction opposite to that of Betaflight by default. TPU clogs protect the ends of the arms. The flight controller is a SucceX-E mini F4 based on an F4 processor, flashing with Betaflight, with an active OSD and 4 UARTs in total. On the top of the drone, you can find a 4 in 1 Succes-E mini 35A BLheli_S and DShot600 ESC.

The camera connects via a cable that runs from the flight controller to the Caddx Vista box at the rear of the aircraft. Its antenna is a 10 cm long LHCP polarized model, which is planted in a TPU part on the back. For transport, you can remove it by pulling lightly. It is important to pay attention to the loops created by the antenna cable, which is quite long. The camera is in front: it is a Nebula Nano (1.4 x 1.4 cm) inserted in the foam block that allows it to be fixed on an assembly of 1.9 x 1.9 cm. The block is screwed on two pieces of TPU sliding in the front uprights, with the possibility to adjust the inclination at will. The camera is slightly backward, which allows it to be protected from some shocks. Behind,

Right in front of the flight controller, held by a TPU piece, is a battery-free buzzer. The Chimera4 4S LR with Caddx box is controllable with a DJI radio remote control. For my part, because I don’t have a DJI radio, I added a TBS Crossfire Nano RX receiver. Everything has been designed for easy integration: it must be inserted in the part of the TPU that holds the video antenna (inside the structure). In addition, the dedicated TPU GPS part allows you to attach an Immortal T TBS antenna. The pins of the 4 welds (GND, + 5V, TX, RX) to be made are small, but even with my chronic inability to weld, I managed. I limited myself to removing the 6 screws from the upper carbon plate, without even removing the flight controller.

The power supply requires a Lipo 2S to 4S with an XT30 plug. iFlight offers a piece of rubber that must be glued to the top of the back of the structure: it is a non-slip battery. In fact, there are two of these pieces in the box. The equipment is completed by 3 belts of different sizes to secure the battery. Note that the flight controller’s micro USB connector is easy to access, as is the USB-C connector on the Vista box. iFlight offers a USB / micro USB cable and USB / USB-C in the box.  Without a battery, but with a Crossfire receiver and an Immortal-T antenna, the Chimera4 4S LR weighs 178.3 grams. This is slightly more than Flywoo Explorer LR HD 4p (165 grams).

Switching to Betaflight Configurator is inevitable to check the Betaflight configuration, present on the Chimera4 4S LR in version 4.2.0. iFlight handled most of the settings, including PIDs, GPS. But it’s up to you to choose the arming method, flight mode, buzzer activation, Flip Over After Crash, and GPS Rescue.

Note, however, that GPS Rescue on the Failsafe tab is not enabled. It’s up to you to do it. It is also up to you to test the correct operation of the GPS – it is only active when a battery is connected, the USB connection is not enough to provide it. Take all the usual precautions when activating GPS Rescue for the first time. That is, close to the ground to check if it does not cut the engines, then in height if it does not push the engines enough. Keep in mind that buying cold GPS signals is pretty quick – and almost immediately when changing the battery. You also need to activate the Vista box, update it (via DJI Assistant FPV 2), and pair it with DJI headphones.

Can I use a Futaba t8fg super remote with this drone?

Is the long-range system only for use with a DJI remote?Z

Can use the new v2 DJI goggles and controller with this drone?