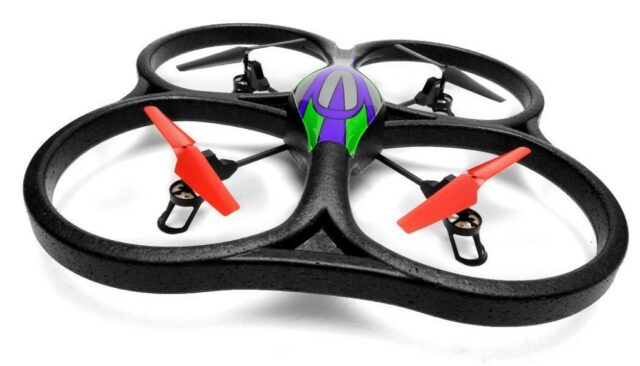 Today, we will be talking about a mini drone that is mostly fit for anyone: either a beginner, pro, child, or adult. The WL Toys V262 Cyclone Quadcopter is a beginner friendly, ready-to-fly drone that is especially known for its durable construction. The brand WL Toys has been around for years now, creating awesome air toys, especially small-scale ones. The V262 model is an exception to this rule, as it is larger in size by comparison, and also heavier. Nevertheless, it is still an amazing drone that is worth our while.

We mentioned before that the V262 Cyclone model is bigger and heavier in comparison to other drones from the WL Toys manufacturer. To give you a better idea, the V272 model has the following dimensions: 4.5cm x 4.5cm x 2.5cm and a weight of 13.7 grams. Quite a big difference we dare say. Even so, this difference comes with its advantages, as the extra weight gives the drone more stability in windy conditions, therefore handling turbulence like a pro.

Also, another important fact about the V262 Cyclone is its high durability. This comes from its molded foam canopy shell that can handle light crashes or hits, graphite booms that improve strength while decreasing weight, and four rotors protected by plastic housing. Other than this, the overall look is kind of impressive, as the molded foam canopy shell is black, two propellers are also black while the other two are red, in order to help with differentiation, and an interesting design on the body. LED lights are also present under each rotor, and they flash quickly until the gyroscope has oriented itself, while also indicating which is the front and the back of the V262 Cyclone, for easier navigation.

You will notice that on the transmitter there is also a LCD screen that provides you with important information about the drone and its flying status: trim values, the amount of power that is being consumed, and the status of the drone rotors. The only downside that you might encounter with this transmitter is that it requires AA batteries, six of them to be more exact.

As the V262 Cyclone is beginner friendly, its controls are easy to learn. Also, it is a large and powerful enough drone to be able to remain stable and upright when it comes to windier conditions. The 8 to 10 minutes time of flight is just enough to tire out any pilot, especially if you are dealing with any special circumstances. But, if this time is not exactly as much as you would wish, you can always buy a spare battery. Do not worry, on the V262 Cyclone, the battery is easily accessible, so you can switch it out without the help of any special tools.

Flying the V262 Cyclone could not be easier. It is properly calibrated out of the box, so after the battery is plugged in, you should put it on a flat surface as soon as possible. To recognize where the ground is and to be able to maintain its level, the drone uses its internal gyroscope. For a quick lesson, here are the general capabilities of the V262 Cyclone:

With the left stick, you can control how high or how low the drone can go. Also, you can turn it to the left or right, and the drone will do so slowly. There are four different possible speed modes. They offer either 40%, 60%, 80%, or 100% of the power and manoeuvrability. This is highly useful, because this way as you advance in skill, so will the drone. Other fun features include the ability to fly backwards and forwards, and also to dip and leap in any direction without turning.

How you can modify the V262 Cyclone

If you want to turn the V262 Cyclone more to your liking, you can do the following things. To lighten the overall weight, you can remove the foam cover as soon as you become comfortable and confident flying the drone. By doing this, you can handle it easier and also make it faster. Also, you can attach a GoPro, even your smartphone, or other small model cameras to record while flying.

The package of the V262 Cyclone includes:

The V262 Cyclone is amongst the best models a beginner could buy. Nevertheless, it is a great option also for people who are looking for a ready-to-fly drone for everyday use. The things that set this model apart from the rest are the trick mode and the adjustable sensitivity, as not too many beginner drones often include them. If you do decide that the V262 Cyclone is a good fit for you, you can find it on Amazon for a great price. Let us know about your experience with it!