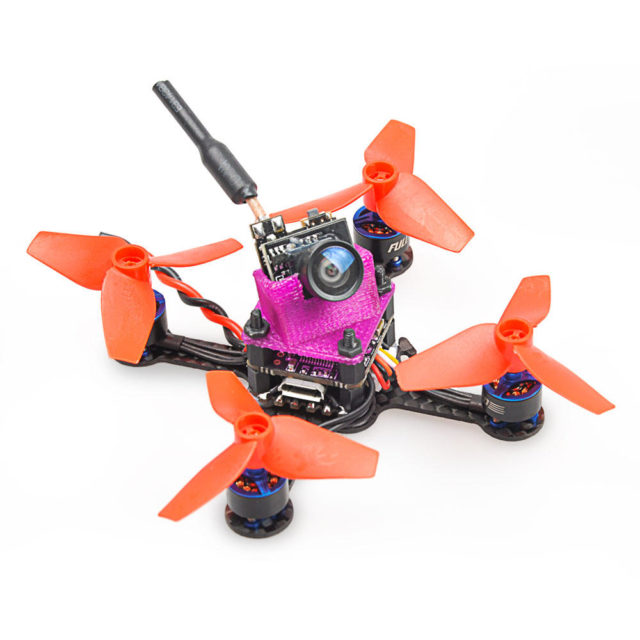 The market of quadcopters holds a dozen of mini quadcopters and what we mainly know about them is that as small as they are, they prove to be fast and efficient. With this article we will make a deep analysis while going through a FULLSPEED BEEBEE 66 Quadricopter Review.

The developers who came out with this model are Full Speed RC, the same company that produced the highly successful Leader 120. Similar to this are also the following models, the JJRC H36 or MJX X909T

Fullspeed BeeBee 66 is a micro brushless powered FPV racer quadcopter or in other words, a brushless Tiny Whoop. Along with the powerful drones that are designed for aerial photography and have all kinds of tech improvements, mini drones are also searched by the people who start their experience in drone flying.

I also want to add that this model right here comes in two versions: BeeBee 66 standard and  BeeBee 66 Lite. Of course there are some differences between the two: the former is more expensive that the latter, the standard BeeBee 66 package comes with prop guards and upgraded camera protection canopy, which makes it tougher.

Thanks to this detail, BeeBee 66 Lite is much faster than the standard version and reacts to commands slightly quicker as well. Another advantage is the flight time, which is a bit lengthier too, an aspect which many users will appreciate.

All in all, the standard version is suitable for those who need more stability and security, especially those who fly for their very first times, whilst the Lite version is the way to go when you are an experienced user and you do not need fancy features.

How it works and what its inside holds

The Camera – it seems to be similar to the one on Leader 120, both of them come with 48 channel vtx, sporting all the channels you might need. BeeBee 66 powers a 25mW transmitter, small if it is to ask me but you can not expect more from such a tiny device. The camera quality is not something to brag about and it’s not an aspect for which this drone should be bought.

The flight controller – This little thing has a 16mmx16mm stack. Both 4 in 1 ESC and flight controller are 16 by 16 millimeters which is believed to be the smallest stack form factor on the market. Even more, this Teenie 1S flight controller sports an integrated Betaflight OSD with a voltage sensor. It can be configured with multiple flight modes: Angel, Horizon and Acro.

Going deeper in its technical details we should mention that it Teeny 1S F3 flight controller is running on the standard MCU (TM32F303) and is sporting the well-known MPU6000 SPI sensor. These are perfect to keep the device stable and give a smooth flight.

The Electronic Speed Controller – is powerful, it features a 6A Teeny 1S 4 in 1 ESC board that supports Dshot600. It comes with a small voltage, it is said to do a great job and it comes synchronized straight out of the box.

The Battery – Taking into consideration that this is a 1S micro brushless racer, it’s not that surprising to see it’s having a miniature 260mAh LiPo pack. These types of batteries are actually quite common and they come with all brushed and brushless tiny whoops that appeared recently. More than that, the the battery has a high voltage LiPo package (meaning it goes up to 4.35v per cell instead of standard 4.20) made by GNB. It takes just about 20 minutes to fully charge it up so having extras is well appreciated if you love flying tiny whoops.

The connectors are pretty loose meaning it is easy to put them wrong side in and what I’m trying to say is that you have to be careful not to get them wrong so not to burn the 4 in 1 ESC boards.

In addition to the prop guards that come with the standard version of BeeBee 66, there are also 2 additional ones that come with both versions. You will also get a battery charger. It is essentially a small red board with mini USB port on one end and battery connector on the other.

The second accessory is the micro USB adapter. It is recommended to use it every time you want to connect the drone to your PC to configure Betaflight settings or flash another firmware on it. In case you lose it, you will be forced to remove the motor in order to get access to the mini USB port on the FC.

In order to fly your BeeBee 66 you have to know that the drone comes already pre tuned so all you have to do is just plug the battery, bind it and you’re ready to go. The first flight proves that the flight capacities of BeeBee are pretty unacceptable.

That is because, in terms of line of sight, the flight performance is dull and uninspiring. Immediately after the drone takes off you can see that it starts to dipp(pitch/roll) and twist(yawn) under load. What’s worse is that after just one and a half minutes flight the battery is sagging down below 2.7v – the motors are clearly very demanding for their relatively mild output.

In other words, the canopy and the propellers are very resistant, even though I crashed it a few times nothing happened to the propellers and they stayed in place, they didn’t come out easily.

In terms of price its cost about 100 dollars so it’s not cheap but on the other hand the advantage is that the package comes with a lot of building equipments included.

To get to the end, $100 for this ready-to-fly quadcopter is not that expensive. If you think about purchasing this drone, you will just have to reconsider the battery and the range, as the first is not giving much performance to the drone- just 3 or 4 minutes of flight and you always need additional batteries, and the range, that is not impressive – 150 to 200 meters.