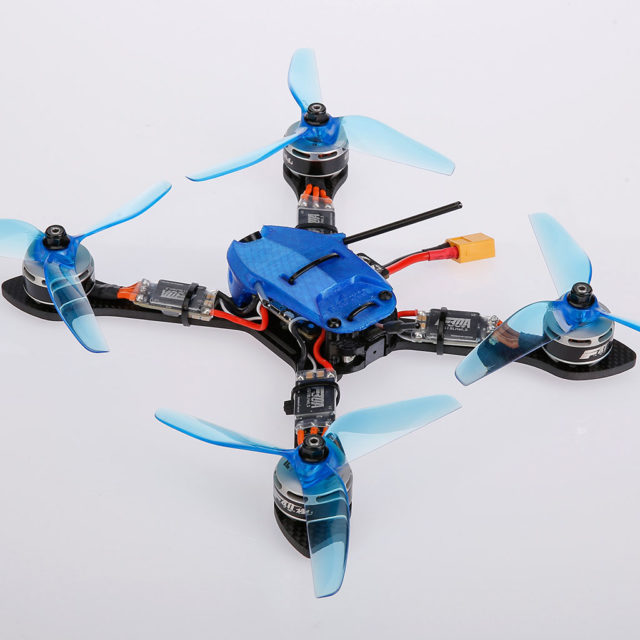 This collaboration between the manufacturer and Gondi began when they discovered that in order to have more grip in corners, you have to stretch out the wheelbase. More exactly the opposite arms in diagonal. The Gondi S5 TMotor Spec special model is forced to the limit in all characteristics to meet the aggressive style of Gondi.

This collaboration seems to have success, the Gondi S5 is absolutely a pro racer drone.

The handling is very responsive and sharp, and the carbon frame is super light. For more speed, the Loki-S5 was modified in a way that other than the lengthening of the frame they also transformed the component storage space. The Gondi S5 was born as a perfect racer drone compatible with the lightest RunCam Micro Swift CCD camera too.

Let’s see in detail what is so special about this racer quadcopter.

Gondi S5 isn’t so special about its appearance. It has a 4 mm 3K carbon fiber unibody which is of course extremely light. The top plate is 2mm thick, so the overall weight of the frame is only 59 grams. The all-up-weight is only 293 grams without the battery which is remarkably light in the category of drone racers. The 5-inch arm drone racer seems to be efficient in the weight sector too.

After many prototypes, it seems to be that the stretched arm form proved to be the most effective. It resulted in fast acceleration and extra sharp cornering skills. This agile nature is reflected in the faster roll characteristic and in the stable, 60-degree pitch behavior. The stretched arm distance, from the motor to motor is 255 mm.

Storm Racing Drone Gondi S5 TMotor Spec has all the latest high-end components that a real racer need or want to. The signature TMotor specification give to this machine an enormous power. This kit owns a T-Motor FPV Series F40 PRO II Brushless Motor (2400kv). It’s like a formula 1 motor put in a go-kart. Under the hood, you will notice the TMotor ESC module, a Matek flight controller module, and a Storm 5.8Ghz 200mw VTX.

The quadcopter is compatible with 3S or 4S LiPo batteries. In the case of 3S from 1500mah or above, and in the case of 4S batteries 1300 to 1500mah 50C or above is suitable. Storm Racing Drone Gondi S5 TMotor Spec has a RunCam Micro Swift camera installed. It has the same 1.3″ CCD sensor like the bigger version with wide dynamic range for more contrast and sharp image quality. The FPV video feed is leg free as expected in this league.

If you want to accommodate with this beast the angle mode is advisable for beginner pilots. In this mode, the drone is auto leveling itself. The horizon mode gives to the pilot more freedom without the angle limitation. In rate mode, you will fly this drone like an airplane, in a professional manner of control without limitations. The three-speed rates ads to the freedom of maneuverability.

Excellence is in the details. The flight controller module uses rubber dampers to minimize the vibration. The aluminum screws are a plus, or more exactly a minus if we look at the weight of them. They are 50% lighter than traditional screws.

With the Storm Racing Drone Gondi S5 TMotor Spec, you will get an absolutely professional machine. Developed for racing the Gondi S5 TMotor Spec will exceed all the expectations. It is not an RTF kit, so you have to buy the RC transmitter, the battery, and the charger. These BNF kits are more convenient for the advanced pilots because you can choose what kind of battery u want to use to power up these machines. You can bind them also with goggles that is compatible with the 5.8 GHz transmission signal. You will find a lot of these on the market.

Overall speaking the Gondi S5 TMotor Spec is one of the fastest racer drones on the market. Take a glance to this article at how it looked this market in the previous year and find out which was the best racing drone.