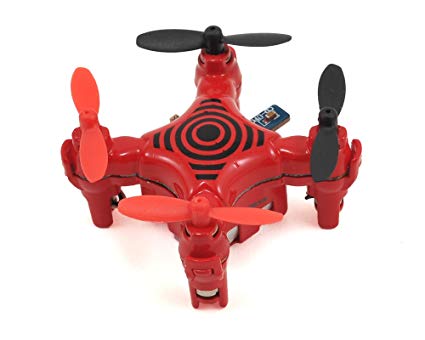 Among the cheap drones, there are many good drones, the price doesn’t necessarily decide the characteristics, so in this Estes Proto N Nano quadcopter review, we will explain why even a cheap drone can be good, even if it is not necessarily a professional one.

The price varies around $40 and offers the following in his package:

As small it is, as interesting can be, Proto N is suitable for flying indoors, no matter where we are talking about the office or any room. With 3-axis gyro and accelerometers it is very stable and is kept extremely easy in air.

Due to the extremely small size of only 1.2 inches / 31 millimeters and weight: 9 grams or 0.02 pounds, it has incredible performance, it responds very easily to commands and with LEDs you can follow it even in the dark…

You can store it inside the transmitter you are using, being so small that you could lose it otherwise. There is not much places where you can’t use the drone, its size allows you to use it indoors anywhere but also outside.

Being called “the world’s smallest drones,” many consider it a toy for children, but it would be advisable not to leave them unattended.

The battery can not be removed, but this is not necessarily a negative thing, with the cable in the pack, it can be charged easily.

The drone itself is a ready to fly, yet there are a few things to do before flying, such as placing the 4 AAA batteries (NOT included) in the transmitter. Also, Proto N must be charged, this is easy to do with the cable and the method can be chosen by yourself, the USB can be connected to a PC or laptop, or by a plug-in adapter.

As I said earlier, to make sure we will not lose it during a trip, the transmitter has a special storage compartment. It is advisable to arrange the props before closing the lid.

Even if it has a short flight time of only 4 minutes, the charge time of the battery is also shorter than in other models, this being 35 minutes. However, the fact that the battery is not removable is a negative point because you can’t change with a spare battery but you have to wait until it is charged.

For the sake of not losing it from the viewfinder, flips should be done in a smaller space, especially as it takes a little time to get back to the initial altitude.

I have nothing to say except that this drone is VERY LITTLE. If you didn’t understand this from the above review, but putting the joke to one side, Proto N flies very well considering his size. In the case of a farther flight, LEDs are very useful to follow it.