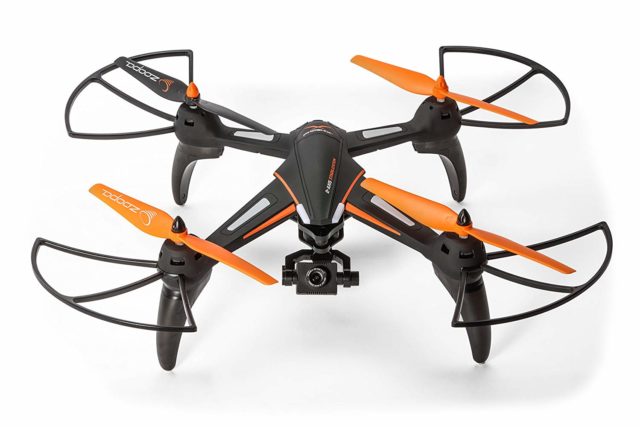 A drone should not necessarily be expensive to look good. The design is one of the parts that can be executed qualitatively and nicely without expensive product. In this Zoopa Phoenix HD Q900 quadcopter review we will also describe this to understand why design is less important and yet not to be neglected.

Getting into the category of affordable drones, priced below $ 200 Phoenix HD Q900 looks very good and has a very good quality. The main function that deserves that money is the two-axis image stabilization that records exceptional video.

The matte black and the orange reflect a modernity and special elegance.

The battery is detachable from the back of the drone and the camera is mounted on a two-axis stabilizer in front of it. Around the body is placed the drone arms, motors and protection blades.

Zoopa Phoenix HD Q900 is easy to control via the remote controller, a rather large and button-studded box included in the package.

The buttons on the remote control are not marked with signs to know what it is used for, so it is indicated that the user’s manual to be at hand in the first flights to get used to each one.

Of course you can use the app available for Android and iOS that perfectly replaces the remote control, perfectly transmitting video recordings and obviously uses the touch screen instead of the control stick.

The Zoopa Phoenix HD Q900 was not designed specifically for speed, but rather for more precise and stable shooting. Speed is reduced and the turn is equally stable for making videos perfectly stable.

Of course, basic flight modes are included, like at any drone: take off and landing. Not having GPS or automatic shooting modes the Phoenix HD Q900 can’t be navigated on a map, so one-touch shots like orbits or boomerangs also can’t be done.

Due to the large size and the weaker motors, it is not advisable to use it in a strong windy weather because it can easily collapse.

A 7.4V 2600mAh 20C LiPo battery makes this drones fly between 15 and 18 minutes. Zoopa doesn’t offer a spare battery but instead it can buy separately for about $ 30.

What Zoopa offers in reserve are extra blades, in case of a change, the necessary parts are unscrewed and they are changed with the new ones.

We’re focusing on photo and video

Phoenix captures pretty good photos and videos with 720P resolution (1280 by 720 pixels, 30 frames per second). The camera is mounted on a two-axis gimbal can be tilted forward, back, left or right to offset the speed of the flight and to shoot as naturally as possible.

Small issues can be caused by front blades that occasionally appear in video footage depending on the position of the camera. Also the microSD card it is advisable to be fixed with something in case of a hard landing or even collapse it can be lost, not fixed enough well.

For such a small price, this drone offers many features that are indispensable to such a gadget nowadays. Recommended for children only over 14 years old, it is very easy to use by any beginner. Especially for those who want to begin making drone videos, but the budget doesn’t allow a more expensive product.