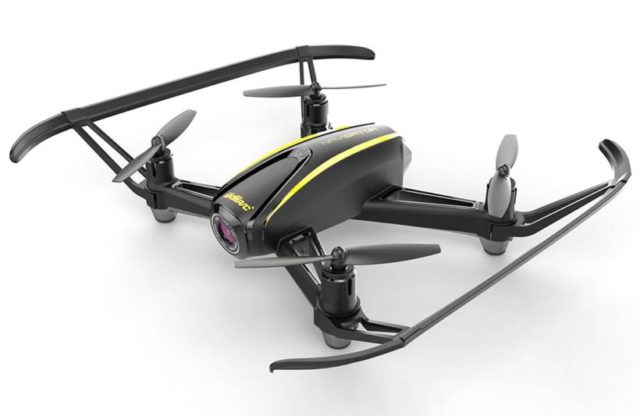 The Drocon U31W also known as The Navigator could be a very good choice for those who haven’t owned a quadcopter before. You can call this drone a beginner drone but it can be a pass forward for those who only owned a mini drone before and now they want to upgrade their toy to a more professional one. This drone is equipped with a camera, altitude hold, a simpatico design and many more.

First, you might ask why should you buy a drone? Well, there are many answers to that. One of them is that it can give a plus in your life. You’re never too old for a new hobby. Especially for a hobby that gives you so much fun. And besides that, it’s a useful hobby. Having a drone at your vacations can give a unique perspective for the photos you’ve made. And last but not least drones are becoming more and more popular, so better have one in the at the beginning of the drone trend.

All right, let’s start to talk about the drone. The Drocon U31W has a solid black color with a few yellow lines that gives him a sporty look. The camera is fixed at the front of the drone, so you have to be careful not to crash the drone at his head because the camera will be damaged too. The power button is placed on an access point, at the top of the drone where it’s easy to press it. The drone measures 85 grams and has an 18.3 x 19.8 x 4.3 cm. Having these sizes has some advantages. Like you can use it indoor as well, just be very careful with the walls and windows and I suggest you use it at a low speed. Another advantage is that it’s easy to transport. It fits easily in a backpack or a suitcase.

When the drone arrives it comes mostly put together. All you have to do is to install the propellers, the guards and the legs. Don’t skip the last two. It might look useless but they can save your drone from a lot of damage. Without the legs, you will have a lot of scratches on the bottom of your drone and you clearly don’t want that. With the provided screwdriver the assembling process is very easy. Just follow the users manual precisely.

The Drocon U31W Quadcopter comes with a 2MP, 720p HD camera with a 120-degree wide-angle camera. The camera can’t be removed or changed because the camera is built-in. There are some drones who are compatible with other sports cameras like the GoPro, for example, the Holy Stone HS700 and many others.

The drone is capable of FPV (First Person View) transmitting which gives you the chance to use the drone with your phone as well. You can see in live transmission what your drone is seeing. And for making your FPV experience a better one there is a phone holder on the remote control. But there’s even more. You can connect your smartphone to a VR (Virtual Reality) with which you’ll have the exact same feeling that you’re flying. Cool, huh?

Making selfies with the drones has never been easier. Because with the altitude hold and the FPV you can make the perfect photo from you or from a beautiful view without having a noisy picture. This feature ensures that the drone is staying in the exact same height as you left him. So you don’t have to struggle to keep the drone in the exact same position as long as you’re taking the picture.

The drone is also able to fly in headless mode. When this feature is activated you can make the drone in every singe direction without moving his head in that direction. It could be a useful tool for the beginners but for the video makers as well because with this feature you can make cool transitions, B-Rolls and you can follow an object in a more professional way.

The manufacturers thought about beginners a lot. Mostly with the Takeoff/landing button. Whit that drone takes off by pressing a single button and the same at landing. But the drones don’t just randomly land. It goes back to the point where he took off and lands there. This is useful because you won’t crash the drone trying to land. Which a really common thing among beginner users.

The drone is enabled with some safety features as well. These features alarms you when your battery is low. In that case, you easily pop out the battery and charge it for 70-75 minutes, or change it with another battery if you have one more. The drone also alarms you when you are close to the edge of the flying range. This way if you pay attention to the alarms you won’t’ lose your drone.

“Drone was easy to learn how to fly and to get started with. But the battery it came with was a complete mess. Would last for 5 minutes of flying before the remote started beeping. I used the drone around 10 times until now and today it stopped connecting to the remote controller. I guess you get what you pay for.”

“The video quality is good, but don’t expect it to be as good as your smartphone.  There is no image stabilization software, so you have to have a steady hand if you want to film. Using a video stabilization program will make it look good too. The FPV is good, but only for 30m, and once you go past it the live feed will break up and lag. There is also a minor design flaw with the quadcopter’s propeller guard. The rear propellers are too close to the guard, and if you bump into a wall the propellers will scratch up/be scratched up by the guard, but not chipped. This drone won’t fly well in windy wheather, but that can be avoided by using the easy trim feature.”

“I purchased this due to the 90-meter range, FPV capabilities, headless controller mode, and finally altitude hold. I watched several videos on the U31W Navigator and read the instructions 5 times before ever charging up the battery and attempting to fly the toy. Initially, due to its automatic launch feature, I attempted to fly it indoors but found that it couldn’t be “trimmed” to hover and kept drifting off and had to be corrected…not a good thing to have hitting walls. The prop guards are terrible, I’ve never seen a drone to quick to shed a prop…they’re only 60mm long and get lost in a hurry. After four days I’d flown the unit about seven times total. I followed the instructions for pairing the remote to the bird, launched it up about 10 feet off the ground, 5 feet to my left was attempting to CCW rotate the bird when it made a single beep and took off north…the battery was fresh, I watched the U31W disappear over the tree line till out of sight.”

The Drocon U31W Quadcopter is clearly for beginners or for those who don’t want much from their drone. It’s is true that is built with some useful features, but those are just some basic things. The fact that it has a low-quality camera and it has the range only 80 meters makes the drone unacceptable for the more experienced drone users. However, if you only want a basic quadcopter to use a few times in a year then the Drocon U31W is perfect for you. It has a low price and knows all the basics a drone needs to know.

If you want to buy the drone you can do it on Amazon.