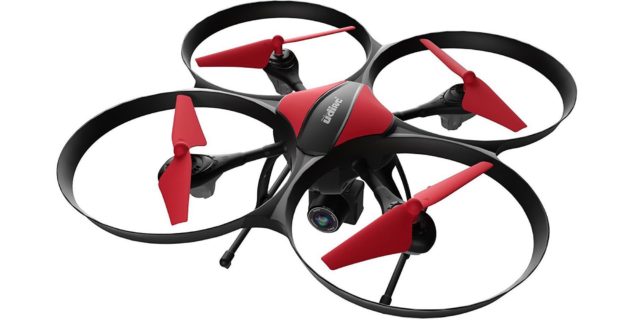 Nowadays drones are much cheaper and cheaper so everyone can afford them. And you may not see the meaning of buying one but you should try it. Some people say that you have to try out as many things as possible to find out what you’re real passion is and in what area are you the best. And following this idea, it might be a good choice to try out flying a drone. It’s fun and it’s a complex activity. It stimulates your creative side and you need some piloting skills as well. And if you don’t want to spend too much on a drone that’s OK, check out our list with the best cheap drones on the market. On the list, you will find this drone as well.

The Force1 U49C Red Heron Quadcopter is a strong drone which can do pretty much for a low price. Of course, it can’t compete with the bigger names but for a beginner drone user, it might be a good choice. It has a good camera, a professional look, and some features which make easier enjoy your time spent with the drone. Let’s start.

Let’s start the review with the parts included in the package:

The drone has a wild black and red color combination, as the name refers. It has four propellers on the top which gives him a strong and powerful look. Around each propeller, there is a guard so it has a full, 360-degree protecting range to ensure the safety of the drone in the case of a crash. The drone is built massively so it will survive minor crashes without a problem. For the safety of the camera, the manufacturers built some legs to the drone to protect the drone when you are landing. Just make sure that the surface is as even as possible. At the bottom of the drone, the camera is well fixed so it will give you clear photos.

The camera on the Force1 U49C Red Heron is a 720p HD it’s not the best by far but for this price range, it is acceptable to have only a 720p camera. But the good part is that the camera is a 120-degree wide-angle camera. With this, you won’t get a fisheye effect just a clear, linear and wide picture. So you won’t miss a thing in your photos and videos. Everything you want will be on that footage.

The battery of the drone is easy to remove, and it’s 7.4V 1000mAh LI-PO Battery, which is able of 15 minute flight time. With two pair of this battery, this time is doubled. The battery takes a few hours to charge it fully.

The brushed motors are giving the drone a more powerful boost. But it’s also enabled with multiple speeds so if you don’t feel secure flying in its maximum speed you can adjust it to your preferences. If you’re an inexperienced drone user I advise you to start at a low speed until you learn about the “how’s” of the remote control. And after a few hours of flying the drone, you can unleash the full speed of the drone.

The fact that it can fly up to 15 minutes with one battery makes him one of the best in this category. The drone can fly in the range of 60m which is a bit disappointing but if you plan well what you want to capture it can be enough to take amazing shots.

The drone is capable of some pretty amazing skills to ensure your fun while using it. These features make your days with the drone more easier and help you to take even better photos.

One of the most useful aspects of the drone is the altitude hold. Without this making, a stable photo is a nightmare. Having this feature keeps the drone on his position in the air after you put down the remote control. It’s good because you don’t have to have your hand the remote all the time.

Usually, the most intense part of flying the drone is the landing. Because everyone worries to hold the drone still and even, to don’t hit the drone on an unprotected zone. But that doesn’t apply in our case because the drone is gifted with a trick that helps the drone landing by himself. All you have to do is press a button on the remote and your little friend will do the rest of the hard work. At the beginning of the flight, this button also gives the order for the drone to take off, and you’re fun can begin.

The next feature this drone is capable is the “Headless mode”. With this, the drone doesn’t have to face to way it’s going. It’s perfect for those footages when you want to follow an object or a person. Also sometimes drones camera has in the footage the foot of the drone. Mostly at the drones who have a wide camera like this one. But if you enable this feature (you can do this with pressing a button) you won’t have this problem.

Others opinion about the U49C Red Heron

“After searching features and reviews for two years on drones, finally got the Force 1 for my husband’s birthday and he loves it! Never having a drone it was impressive that he had it together and flying relatively smoothly in a very short period of time.

-Easy to put together, calibrate and fly even for a beginner, though flying does take some practice!

“This is a great quadcopter for beginners. The Force one Red Heron has a durable build that would allow new pilots to crash at will, as they learn the ropes. Beginner pilots and experts alike will enjoy flying the Red Heron. Here are my Pros and Cons to for this quadcopter.”

“My fiance and I been wanting a drone for a while now, and now that four got one we four like a kid in a Candy Shop. I like How is if black with red propellers. (Also came with an extra set). With one battery you get 15 mins if fly Time if Not a little longer. (2nd battery included). We took this to the field by my apartment without the camera attached since it was our first time flying and we both agree It was smooth sailing, the controller is easy to function. (Reminds me of an Xbox controller).

You can launch and land with the touch of a button, use altitude hold to hover trouble-free and engage headless mode for easy orientation – features that make this one of UDI’s best drones. This drone is also a perfect starter for kids around 10 years and up.”

This Force1 U49C Red Heron is certainly for beginners. However, it’s a perfect choice if you want to have a taste of a drone user life. It has most of the basic feature a drone needs to have. But other people who have to make good photos or videos for a living clearly won’t buy this drone. And if you are a more experienced person in drones and noticed the absence of the FPV in the article it’s not a mistake.

The manufacturers decided not to put an FPV feature in the drone so you won’t be able to see in real-time the footage you’ve taken with the drones only after you connected it to your PC. However the bigger brother of the drone, the U49W Blue Heron comes with that feature. It costs a little more, but it can do more as well. And not having this in the drone eliminates all the other phone-related feature as well. Otherwise, in my personal opinion, these features are enough for a beginner. It’s all you need. More features will only complicate you. First, you have to learn the basics. And if you did that you can upgrade to a better drone.

If you’re interested you can buy the drone on Amazon and Ebay.